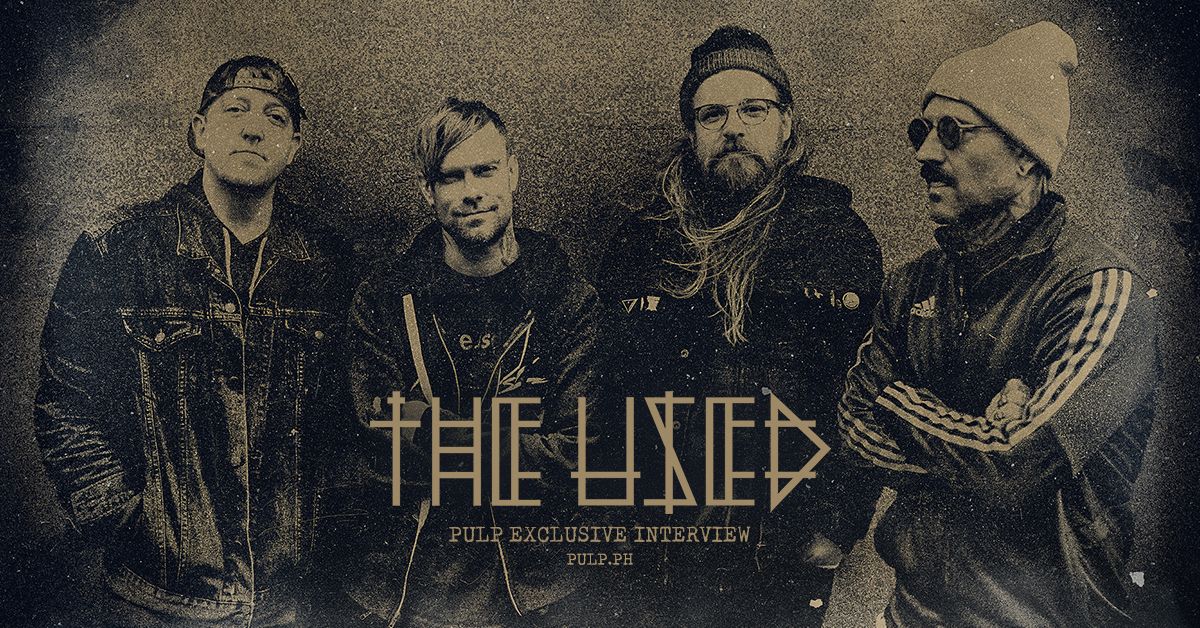 HEARTWORK: A CELEBRATION OF THE USED’S 20 YEARS AS A ROCK BAND

How does something last 20 years? For two full decades, you put in both the heart and the hard work, the dedication and devotion to one’s craft, all to stay at the top of one’s game. Perhaps it sounds that easy because of bands like The Used who have indeed made it seem so easy to give the heartwork that it takes

Through the years, The Used have become masters of consistency. Through everything, they have maintained the influence they’ve taken hold of effortlessly and intricately—from the time they were propelled all over the place by the “emo” explosion of the 2000s, to being considered one of the strongest modern rock bands of today.

On the cusp of a 20-year legacy and what we all hope would be 20 more years of impact, The Used have released their eighth studio album Heartwork last April 24th via Big Noise in celebration of what has been and what will be—of what’s been done and what’s to come. “This record is a celebration of The Used’s 20 years as a rock band,” bassist Jeph Howard tells PULP in the following interview, and this sounds like the only explanation we need to hear to understand what makes Heartwork so monumental.

Jeph also talks about “adding throwbacks” in the new record, welcoming their new guitarist Joey Bradford into the band, getting to work with John Feldmann again, and doing the collaborations that are featured in Heartwork. More importantly, he talks about heart, creativity, and gratitude—and what hitting the 20-year mark means to The Used:

PULP: One of the first things that came to our minds when details of the new album came out is, is there any correlation whatsoever between the upcoming album, which will be called ‘Heartwork’, and the previous album Artwork, specifically?

JEPH HOWARD: This record is a celebration of The Used’s 20 years as a rock band. The connection is there, we have multiple connections on this record to other The Used songs or themes, as we have done in the past with other songs/themes. We love adding throwbacks as sort of an “ode to” or a “remembrance of” The Used. A lot of it is for the die-hard fans to explore and find as a thank you.

PULP: Welcoming Joey Bradford into the band, how would you describe the dynamic that The Used had while working on this album given the new lineup?

JEPH: Joey brings that mellow push and solid, positive vibe that makes him easily slide into being a part of The Used. If he was in a movie he would be the dude from Big Lebowski.

PULP: It’s been said that the album “plays on the emotions, the sincerity, and the vulnerability of the first record and ‘In Love and Death’, with a little bit of the flair from ‘Lies for the Liars’.” How did the band wind up having elements of these two albums in particular in the upcoming release?

JEPH: There is a lot of heart in this album, we all sat together during the recording, putting input and feel toward each person’s parts. We each really put ourselves out there on this one. With Bert’s vocals, you can tell he was really pushing his limits emotionally and physically. This record should be taken in as a whole, extremely loud with headphones on, late at night with the lights off. And now that’s your homework (laughs)

PULP: Working with John Feldmann again on the new record, what’s something that you missed about having him work on your upcoming songs? And would you say that there’s been something new about the process this time around compared to all the previous times he’s worked on your albums?

JEPH: Yes, I love Feldmann. I’ve really grown up over the last 20 years and he’s deffo been like a family member to me. In this record, it was more evident than ever before, coming back to record with him felt very natural and easy. Creativity was fluid and open with everyone, like spilling oil on glass. Not sure what or where it will take us but we all were seated together and not worried about the outcome.

PULP: The album seems to draw some inspiration from literature, looking at the tracklist and listening to the opening track which you had just released. Do you consider ‘Heartwork’ a concept album? Did you intentionally write the record around, perhaps a certain theme, or was this just how the album ended up coming together? Is there anything that maybe changed with how the band would usually write, compared to how you approached making music in the past?

JEPH: Not a concept album but Ka is a wheel, my friend. And this record does have a lot of literary influences. There was less stress put on the record as a whole as there was for just trying to write songs that really rock. We did three different writing and recording sessions between tours which is very different for us. “Paradise Lost, a poem by John Milton” is technically over a year old because it was from the first recording session. I really enjoyed this way of writing and recording, it all felt very free and open.

PULP: Another thing about the upcoming album is the interesting collaborations that you had. Can you take us through the conversations you had as a band when you were thinking and talking about having these collaborators on the album? How did you decide who to have on the record

JEPH: We’ve never really had the options as much in the past. We did “Under Pressure” with My Chemical Romance, had Sean from Coalesce sing on “Sound Effects and Over Dramatics” to name a few but this time we wanted to have a little more fun. It was simple, really, we had an open verse and outro for “Blow Me” and wanted to have someone come sing on it, we hit up Jason Butler from fever 333. He came over to John’s and wrote a part and just screamed it out within an hour. Very tasty. So we asked Travis Barker, Mark Hoppus from Blink-182 to come jam and then Caleb Shomo from Beartooth to add a verse and outro for another jam.

PULP: 20 Years of The Used! Is this something that you find yourselves reflecting on, if at all? Creatively, with a brand new The Used album coming out soon, what’s different about the band now compared to the band that you have been now with eight albums under your belt?

JEPH: Yes, 20 years as a touring band is wild. I feel more solid and positive about The Used now in 2020 than I ever have been before. So much love and positivity for everyone we’ve met along this epic journey. Gratitude really is everything—once you lose it you lose everything. PULP

Special thanks to Secret Signals