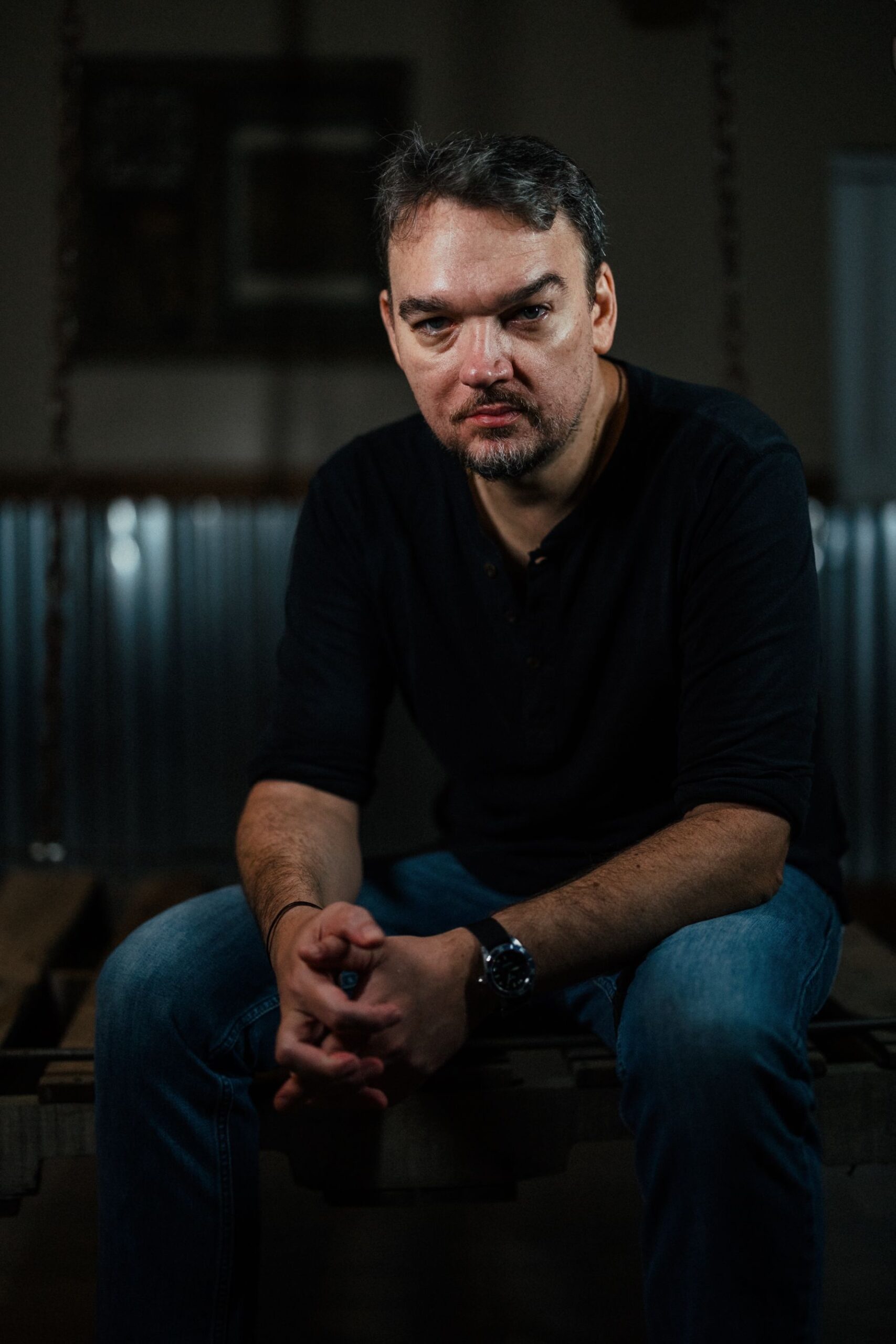 MANY WOULD THINK THAT BEING THE COUNTRY’S UNDISPUTED HEAVY METAL ICON WOULD BE ENOUGH REASON TO REST ON ONE’S LAUREL’S AND WATCH THE WORLD GO AND DESTROY ITSELF. BUT NOT BASTI ARTADI, NO – WITH EVERYTHING HE HAS LINED-UP, IT SEEMS LIKE HE’S JUST ABOUT GETTING WARMED-UP IN KICKING OUR ASSES ALL OVER AGAIN.

Having worked-with and being surrounded-by musicians almost all of my adult life, I’ve always been reminded of the phrase “never meet your heroes” by either someone or by way of a specific experience… I mean, sure – as a fan, the occasional autograph or photo op with your favorite rock star or group seems harmless enough, but the sentiment of that particular adage has almost-always been proven true: after all, our heroes are people too: behind the veil of excellent music and the grandiose illusion of incendiary live performances, there’s a human being in there, who has regular quirks, mood swings… and well, just all-around rottenness.

But it’s different with Basti Artadi. The singer/songwriter/artist who (alongside his former conspirators in the seminal 90s heavy metal act Wolfgang…) singlehandedly carried the torch for Philippine hard rock/metal and made the genre a household fix continues to prove that not all preconceived notions are true, and still shatters malicious naysayers and expectations of the worst kind in the process.

Of course, to say the least, it’s been quite an interesting ride so far.

After many stops and restarts with his now-former band, Artadi seemingly declared himself engaged in an open season of both musical and non-musical projects in the past decade. In-between solo live performances, he collaborated with more than a handful of talented musicians, and released music that was surprisingly in the non-hard rock vein (2014’s Everybody Knows That The Dice Are Loaded  and 2019’s Phantom Maker being the two full-length releases aside from numerous singles…), and found himself involved in theater (most notably the Manila run of the 2016 musical American Idiot) and basically anything and everything he could get his hands dirty with. When the worldwide pandemic hit in 2020, Artadi made good use of the downtime and refired his life-long passion for creating art, whilst still jotting down songs in his notebook.

And now that the proverbial light at the end of the tunnel is in sight, it seems like he is loving the fact that everything is being kicked straight into overdrive.

“You just gotta keep doing what you can while you can,” Basti starts-off. “In my head, there’s like a filing cabinet of all these fucking projects, and the pandemic was an opportunity [for all of us to decide] that we can either sit on our asses, do nothing and worry about shit we literally have no control over, OR we can all start working on these projects we never had time to work-on. So, I started plotting all the stuff that could be done and made some calls… and now that technology has enabled us to do things without being in front of each other, this is what I have,” he shares.

“Plus I hate people, you know,” he adds with a laugh. “So I decided to keep busy so that I don’t kill myself.”

Of course, first on the list was music. As previously mentioned, Wolfgang only officially ended recently after Artadi went on tour in the United States last year, after the terribly sad passing of bassist Mon Legaspi. According to Artadi, the group had always just been lying dormant and was never officially disbanded as most fans assumed it to be.

“I’ve always been a fan of country and folk and stuff like Tom Waitt’s weird shit, hence the post-Wolfgang releases and music I was exploring. But honestly, with the Wolfgang thing, it was just taking an extended step back to re-calculate; I just felt that there was something lacking, gana-wise; and when you’re in that situation, I’m not one who sees plodding-through as a solution… again, take a step back and when everybody says ‘hey, let’s do it again,’ then you do it… I mean, it’s kind of stupid – I had the best band in the world, so if I’m going to make heavy music, I’d make music with them,” Artadi reveals. “It was just a matter of waiting, but unfortunately, it never happened… so what are you gonna do, you know?”

So by the time the lockdown was in full swing, the songwriter found himself missing the trademark sound and fury of heavy metal. Artadi, alongside his current live guitarist Frey Zambrano (formerly of OJO ROJO fame…) produced and had teamed-up with Allan Paolo Confiado, a recording and mixing engineer (and guitarist for local grunge outfit MAD LOVE MISERY) and began a creative-back-and-forth via email to put together singles that would be released throughout 2021 and 2022: the dark and ominous “The Wolf,” the straightforward sludge-march of “The Blackness of Heaven,” the almost country-western ditty “Baboy Blues” (which features a blisteringly melodic solo from David Aguirre) and the most recent scorcher “Panay Abo,” which longtime fans warmly received as a back-to-form anthem. Incidentally, it was drummer Bea Lao (formerly of GENERAL LUNA and now with prog-group FUSEBOXX) who ended up playing drums on the recordings in her very own South Bay Studio.

“Allan’s a fucking genius,” he exclaims, when asked about the creative process. “I’ve always known him and would see his band, but I never knew about his whole writing and production skill, and it’s fucking amazing: I had all these songs, sometimes just me and a guitar or just my voice and I would send them to him, just emailing and he would either build from that or even send me snippets of music.”

The songs are actually scheduled to be part of an upcoming full-length called Black on Black/Blood On White (to be released on vinyl via Backspacer Records in the coming months…), and Basti shows me the amazing art for the album done by Lourd De Veyra. It’s even more exciting when he reveals that a lot of the songs feature guest guitarists like Manuel Legarda, Jomal Linao of KAMIKAZEE, John Dinopol of URBANDUB and Pakoy Fletchero of TYPECAST, among others. Though eager fans will have to wait a bit more to hear everything, Artadi has currently been tearing-up various venues in and outside the metro with his current live band consisting of lead guitarist Zambrano, guitarist Paul Pantig (formerly of MONKEY NO HERO and OJO ROJO), bassist extraordinaire Marco Cuneta and drummer Walter De Vera. The shows – needless to say – are explosive, hour-plus blow-by-blow spectacles of classic Wolfgang favorites, new tracks and the occasional gems, in the form of covers like Black Sabbath’s “Symptom of the Universe,” and “War Pigs,” Ozzy Osbourne’s “Bark At The Moon” and even Judas Priest’s “Living After Midnight.” Although Basti admits that he misses the overall craziness of gigs back in the day where people were going apeshit in the mosh pit, he’s not complaining – and is positive the day will come that audiences will no longer be tied to their chairs.

Truly, he has the whole rock n’ roll attitude and vibe perfected to an art.

And speaking of art, Artadi also has his hands full with Black Hearts Gallery, with paintings and pieces – both commissioned and not – that he’s been working on throughout the pandemic. Also exciting is the fact that he – alongside former bandmate Manuel Legarda and artist Ramona Gaston, are scheduled to release the Darkness Fell book – a project four years in the making – filled with beautiful art, words and to be accompanied by an all-new instrumental version of the Wolfgang classic (recorded by Legarda…) that would serve as a soundtrack for viewers to listen-to while turning the pages. (Note: The upcoming release of the Darkness Fell will coincide with a show at the famed 19 East, with Legarda playing alongside De Vera and Cuneta.)

I had to admit to Basti it’s hard for me to imagine that the guy who sang and wrote such pummeling gloom n’ doom anthems like “Halik Ni Hudas” or “Arise” to be involved with… art, with a glass of champagne in hand and talking about strokes and whatever shit.

“Well, I don’t go to artists’ galleries or exhibits; I don’t run in their circles, but I’ve been to the Lourve in Paris, I’ve been to Florence and made sure we went to galleries there, I’ve been to Spain… it’s something I like; art is awesome man, I love it. I love how it makes me feel when I see pieces I like – of course, there are pieces I don’t like but I don’t critique it or anything, I just walk away and move on to look for the next thing that brings me joy.”

As Basti and I wind down the interview with a short virtual tour of his workspace and pieces he’s currently working-on, I realize – for a few seconds – how cool it is to actually just shoot the shit with a guy who’s music has been such a big part of my personal journey in sound as well; no rockstar bullshit or pretense, just a hundred percent real. While we do end up talking about a lot of other things (like themes of my personal favorite songs he’d written way back, and the current state of music and the hilarity of bullshit like mumble rap…), I do ask him a rather showbiz-esque question unexpectedly – even for me: “How much do you think you’ve changed throughout the years? How much of a different person do you think you are these days?”

“I’m always angry to some extent man… I live in the Philippines, what the hell?!!” he laughs. “But I’m not so picky these days… I understand things more and I’m more accepting of how things are, more relaxed; I’m more confident in my abilities – I know my notes, I know my voice and I’m enjoying my singing now and I’m here to have a good time and enjoy the moment, and roll with the punches… LIVIN’,” he states seriously, and candidly adds with his trademark quip and smirk: “Of course, I’m still not accepting of stupidity and all that dumb shit, I mean – fuck THAT. PULP

You can listen to Basti Artadi’s latest music here: