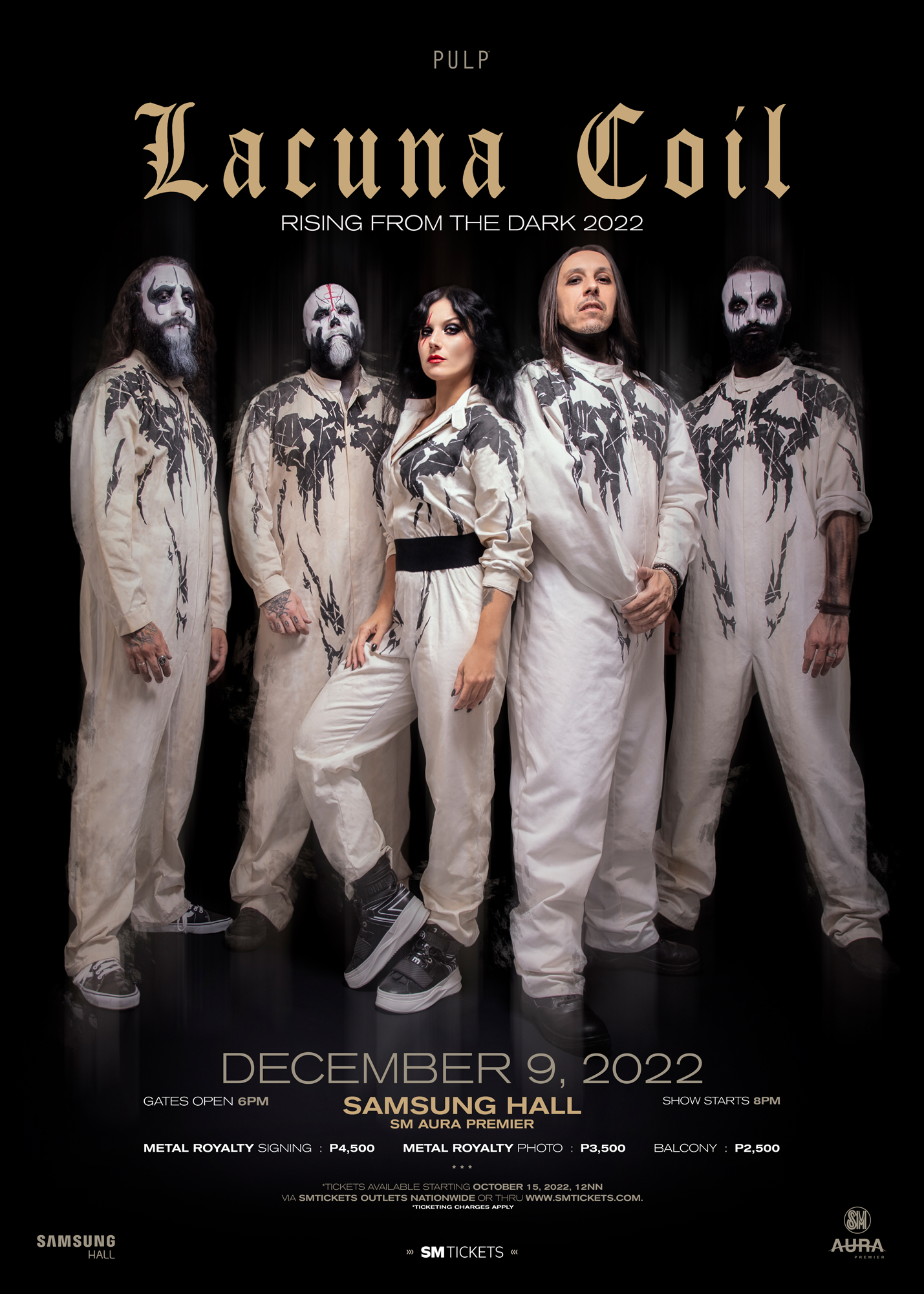 The Gothic Metal band, LACUNA COIL is set to unleash the wild spirits of Filipino Metal fans as
they bless us with divine Heavy Metal tunes this year! PULP Live World proudly announces the
return of LACUNA COIL to the Philippines for their first solo show in the country, LACUNA COIL
LIVE IN MANILA this December 9, 2022, 8PM at Samsung Hall, SM Aura Premiere!

Hailing from Milan, Italy, LACUNA COIL has been taking their fans to different atmospheric
experiences with each of their album releases. The band’s journey began with a hybrid of
gothic, groove, and alternative sounds combined with ethereal mix of prominent guitar lines,
dual vocals, and later on progressed into a heavier and darker Metal aura – one which their fans
want to embark on. Since its formation, the band has bagged over 2 million record sales which
includes their chart-smashing hit “Swamped” and albums Karmacode (2006), Shallow Life
(2009), and Delirium (2016) to name a few.

In 2019, they released an album entitled Black Anima featuring darker and melancholic tracks in
their attempt to dive into a more experimental territory of the Metal scene. This year, LACUNA
COIL continues to impress their long-time and new fans as they re-record, in its entirety, their
best-selling album Comalies. Comalies XX is the band’s 20 th anniversary tribute to the said
album and is set to be a grand double release with the second featuring the original album.

LACUNA COIL’s legacy in the industry is truly engraved for decades as they continue to be
icons of Metal bands worldwide. Throughout their career, they have proven that they are at the
pedestal of bands worthy of the glory, having been awarded with multiple accolades such as
2012 Metal Female Voices Fest Award for the Best Album, 2016 Metal Hammer Award for the
Best International Band, and 2018 Metal Hammer Golden Gods Award for Best Live Act.

A true Metal fan surely wouldn’t want to miss this show! Catch LACUNA COIL LIVE IN MANILA
this December 9, 2022, at Samsung Hall, SM Aura Premier! Doors open at 6PM and we
rock and roll at 8PM! Get your tickets starting October 15, 2022, 12NN at SM Tickets outlets
nationwide or online via www.smtickets.com.