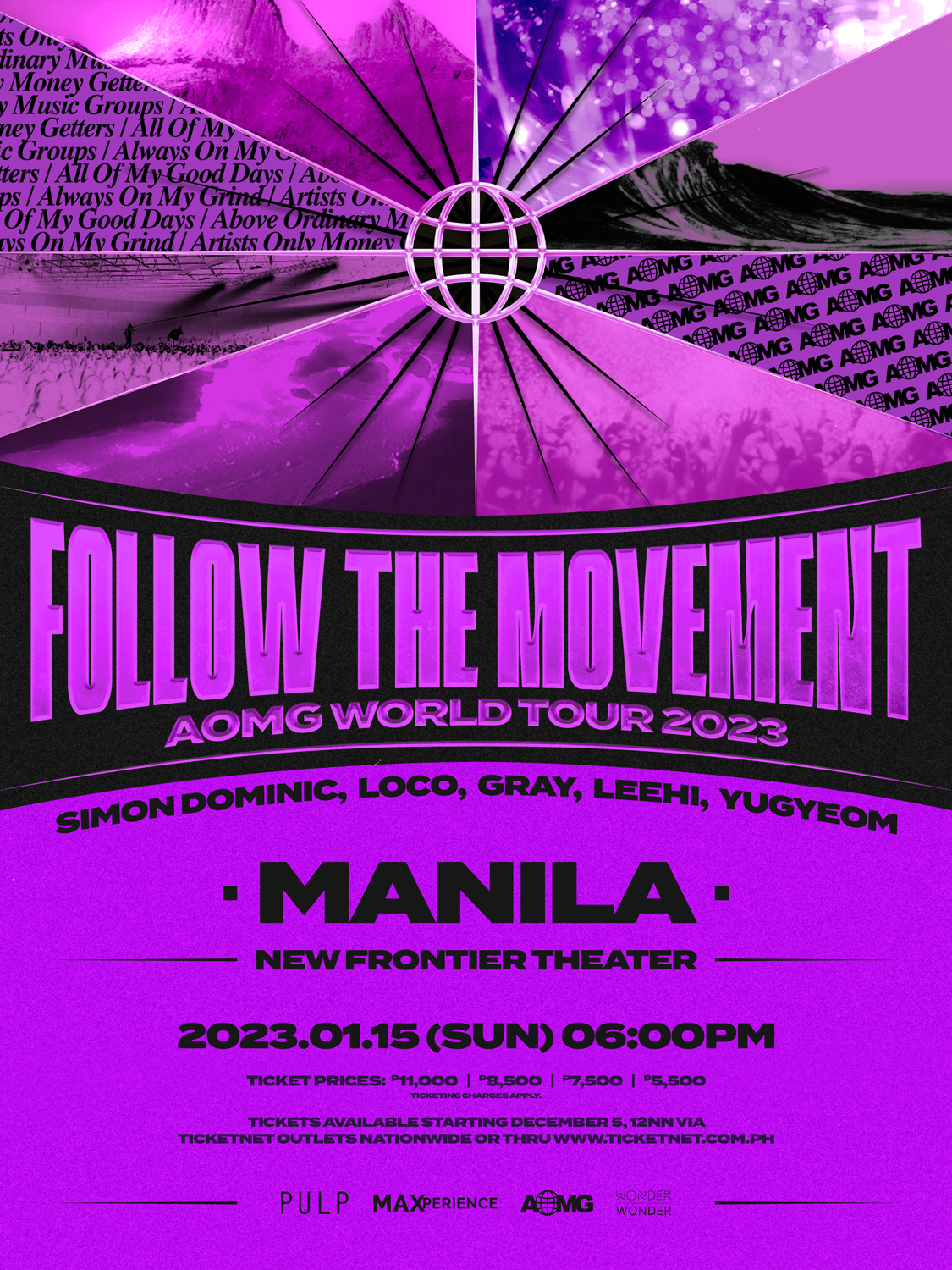 K-Hip-hop fans in the Philippines, it’s your time to make some noise and show us your limitless
energy as we welcome the crew, AOMG, to the country!
You’re all set to experience the sickest party at the start of 2023 as PULP Live World and
Happee Hour proudly bring the highly anticipated K-Hip-Hop and R&amp;B world tour to the
Philippines – [FOLLOW THE MOVEMENT] AOMG WORLD TOUR 2023 IN MANILA on
January 15, 2023, at the New Frontier Theater.

AOMG, also known as Above Ordinary Music Group, is a distinguished Korean Hip-hop and
R&amp;B label founded in 2013. Currently, it houses over 20 prominent artists and producers that
conquer South Korean and global music charts with every song release. The group is iconic in
such a way that you can never talk about the Korean hip-hop scene without mentioning the
AOMG label. Now, they are scheduled for a phenomenal world tour that is set to showcase 5 of
their most elite artists namely, SIMON DOMINIC, LOCO, GRAY, LEEHI, and YUGYEOM.

SIMON DOMINIC is one of the legendary and irreplaceable figures in the K-Hip-Hop and
entertainment industry. He started as an underground rookie rapper and persevered to be the
CEO/artist that he is known today. Since then, he has released powerful tracks that dominated
mainstream music charts in Korea including the catchy single “Simon Dominic” in 2015. His first
full-length album DARKROOM in 2018 and EP No Open Flames in 2019 have further received
recognition from both critics and the general public alike. Everyone surely knows the show’s
going to be lit when they hear the iconic “Simon D-O-M-I-N-I-C” chant, and finally, the
Philippines is about to also scream this live and loud!

LOCO rose to fame after winning the first season of the iconic Korean Reality Rap Competition
“Show Me The Money”. Since then, he has released multiple platinum singles including “Hold
Me Tight (Feat. Crush)”, “You Don’t Know”, and “Too Much (Feat. DEAN)”. Loco is greatly
appreciated for his sincere lyricism and melodic flow which is evident in all his works.

GRAY is a total package performer as aside from composing and producing music, he is also
well-versed in singing and rapping. His trendy style and intricate talent led him to be one of the
top producers in South Korea. With this achievement, he’s done collaborations with domestic
and international music artists and has received countless music awards. His works would
speak for his excellence in this craft. This includes production credits in hits such as Jay Park’s
“MOMMAE (Feat. Ugly Duck)”, Woo’s “We Are (Feat. Loco &amp; GRAY)”, and Zion.T’s “Two
Melodies (Feat. Crush)”.

LEEHI is known for her soulful sound that encompasses a wide variety of genres. She debuted
in 2012 and since then became a remarkable artist in both K-Pop and K-R&amp;B industries. After
joining AOMG, LEEHI released her album, 4ONLY, and won R&amp;B Track of The Year at the
2021 Korean Hip-Hop Awards for her songs “HOLO” and “ONLY”. LEEHI vows to continue
releasing music for her fans and keep serenading them with her charming works.

YUGYEOM joined AOMG in 2021 as he started pursuing a solo music career. With the label, he
released his first solo EP Point of View: U, and ventured out to composing and producing his
own music. He’s also known for his captivating moves as a dancer and choreographer.

YUGYEOM has just recently wrapped up a successful world tour which included Manila as one
of his stops.

In over 3 breathless hours of show, witness SIMON DOMINIC, LOCO, GRAY, LEEHI, and
YUGYEOM hit it up together for the first time on-stage. It’s going to be hot, packed, wild, and
sexy &#39;coz there ain&#39;t no party like an AOMG Party! So, make sure to grab your tickets starting
December 5, 2022, 11AM at Ticketnet outlets nationwide or online via www.ticketnet.com.ph.
Turn up and see you all at the [FOLLOW THE MOVEMENT] AOMG WORLD TOUR 2023 IN
MANILA on January 15, 2023 at the New Frontier Theater.