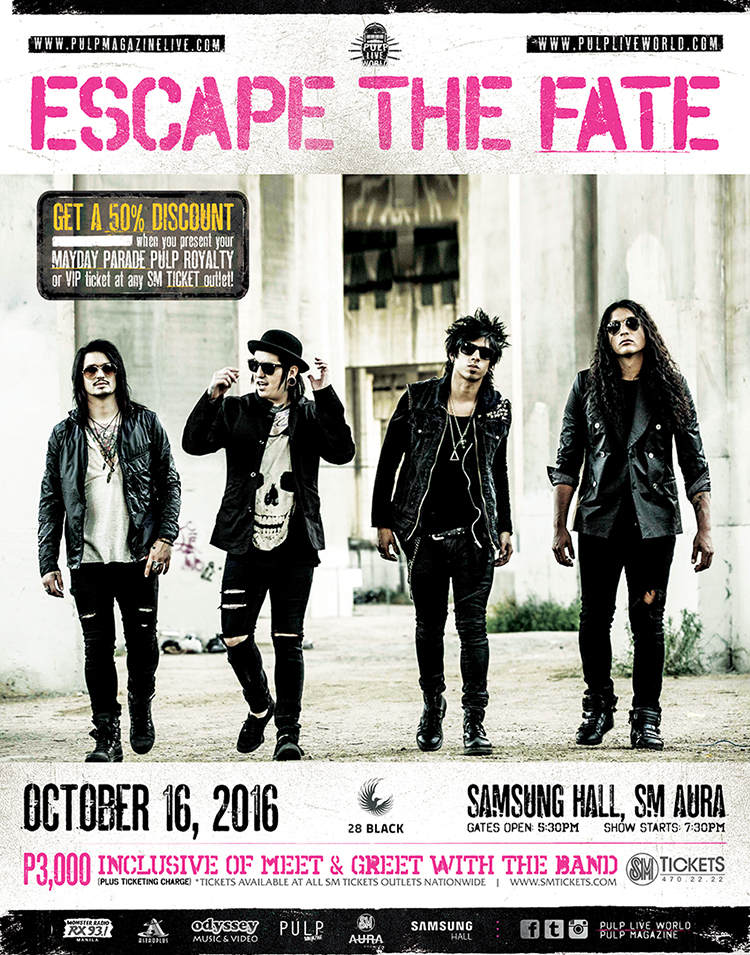 ESCAPE THE FATE LIVE IN MANILA

ESCAPE THE FATE LIVE IN MANILA

American post-hardcore band ESCAPE THE FATE epitomizes hard rock’s liberating and rebellious spirit, as they proved during their convention-defying set at PULP Summer Slam 15 last April 25, 2015 at Amoranto Stadium, Quezon City. PULP Live World and 28 Blackproudly announces that the band is set to prove it anew here in Manila as they return for their very first solo concert this October 16, 2016 at Samsung Hall, SM Aura, Taguig.

When asked about their creative process after all these years by PULP in an exclusive interview last 2015, Ortiz described it as “We’re definitely not making an attempt at ‘mainstream’ hard rock. It’s never been, ‘Let’s do what mainstream is doing,’ it’s always been, ‘Let’s do what we do and that will become mainstream.’ A lot of the sound comes from constant experimentation and increase in confidence. Early on it was just jamming stuff out and whatever felt right. Now it’s listening to it on our laptops. Other than some technical aspects, our approach hasn’t changed at all. Some songs will be more simple and you get the sense that those types of songs will likely be ‘the single.’ Some songs you pull out all the stops and go all out to try to write an epic masterpiece, or a brutal statement. The approach hasn’t changed, why the sound has, I’m not so sure.”

ESCAPE THE FATE Live in Manila will be held at Samsung Hall, SM Aura this October 16, 2016, the night after MAYDAY PARADE Live in Manila, so young Pinoy heavy pop rock fans will definitely be marking it as one riotous weekend courtesy of PULP Live World and 28 Black. Tickets to this one massive moshpit and automatic meet & greet with the band are available exclusively at all SM Tickets outlets nationwide and online at www.smtickets.com for P3,000.00 plus ticketing surcharges beginning this September 16, 2016 (10AM) . As a special treat, PULP Royalty and VIP Ticket holders of the Mayday Parade show can present their ticket to any SM Ticket outlet to receive a 50% discount on the Escape the Fate show (one Mayday Parade ticket equals a discount for one ticket only). For more information visit www.pulpliveworld.com or call 727-4957.