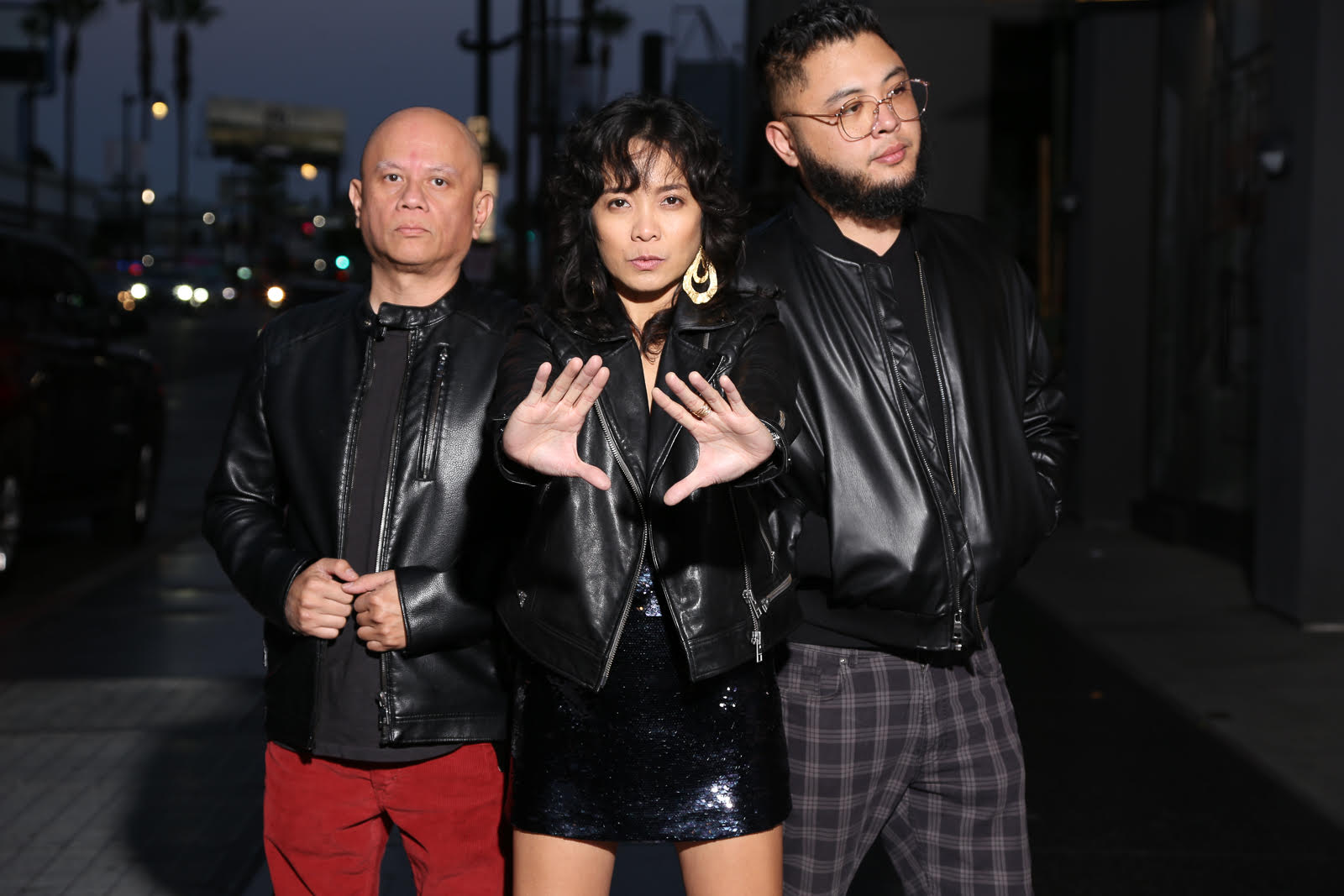 BEFORE YOU EVEN THINK THAT ALL MODERN FILIPINO ROCK MUSIC HAS SUCCUMBED TO THE CONFINES OF THE SAFE AND SOFT INFLUENCE OF ITS WESTERN COUNTERPARTS, THE MELLOW DEES ARE HERE TO PROVE OTHERWISE: AND ARE SET ON PUSHING THE ENVELOPE – BOTH SONICALLY AND LYRICALLY – ALL THE WAY FROM FOREIGN SHORES.
By Joey Dizon

Allow me to be real for a bit: I’ve reached a certain age wherein close to everything hardly ever excites me… especially musically. And that’s not a cheap swipe against the young crop of musicians who are out making a name for themselves online or reaping the success in the social media game that’s, without a doubt, due to them, no…. The thing is, I – alongside other rock music fans who were brought-up on the music and stylings of the greats from our generation (and those that came before us) – simply have a hankering for the other elements that make rock n’ roll great: an almost seductive sense of danger, rebellion, and an inexplicable need to push the envelope.

In short, music that’s not just going to connect to like-minded individuals, but music that can unapologetically push the buttons of the straight, and well, maybe even piss-off the clueless idiots of the world… in short, MY kind of music.

And on one of the most random of November days, I couldn’t seem to get this particular hook out of my goddamn head: “Tikman mong paulit-ulit.” It’s the latest single from The Mellow Dees, one of the most unlikely collective of musicians to emerge from the ever- growing Filipino music community in the United States. Comprised of drummer Wolf Gemora (best known as one of the founders of seminal 90s hard rock/heavy metal legends WOLFGANG, who went-on to become the driving force of US-based outfits LOKOMOTIV and THREE HEADED DOG), Melody Del Mundo (the enchanting singer- songwriter for yet another legendary local 90s band SUGAR HICCUP…) and Robin Nievera (who before leaving for the United States – was already busy making a name for himself in the local Philippine music scene as a gifted songwriter and guitar player), the trio find themselves on a quest to re-ignite the very definition of Filipino rock and roll with a sound that knows no limits and has little respect for what the current trends dictate.

“Wolf and I met in Anaheim, and we just chatted,” says Melody when asked about the beginnings of the band. “I just brought my acoustic guitar, and all I had were my songs, some written way back in 2018 – and the plan was simply just to record them, even as acoustic tracks and upload them online. I just wanted them immortalized, at first. But when we all met, I sang four or five of them, and they all dug-it: so after that we planned on jamming the songs and that’s when Robin got invited. These guys really made these songs come alive – each song has its own distinct persona and character.”

Nievera, who had been a fan of Wolfgang and who – at an early age – knew that he did not want to take the route of being a solo act who did everything in Manila – finds it funny that he found an OPM band all the way in the States. “I heard all the songs on- the-spot, and it wasn’t hard to add things on it: that’s the thing I immediately liked about Melody – she didn’t tell me what she wanted me to do – from what I remember, we didn’t even really talk: we just played; I always wanted to do the band thing – create music with other people” reveals Nievera, and adds, “we’re a lot tighter now and of course, we’ve finalized parts, but that first meeting, we just… jammed.”

“That’s why I think we’re still here, because the music we started off with was very raw and bare-bones,” says Wolf. “The first song we heard was ‘Laman’ and right away I thought ‘well this song has to be played like [Led] Zeppelin’s ‘D’yer Ma’ker’ because it’s calling for a reggae-style…’ and from then on, I was like ‘You got some more?’ and Melody just kept playing good song after good song, and soon, I was like ‘goddamn dude, you got eight songs!’ This is like my third band here in the US, and I was pretty worn-out after Three-Headed Dog – so at first, I was saying to Melody ‘This is all good but I don’t want to do all the work, bookings and everything – and it’s tiring, so I don’t want to do this all over again if it’s not serious…’ but the thing is, the songs were good,” Gemora stresses. “But of course, after all these great opportunities to record and gig, what I said I wouldn’t do, here we are doing it now!” he laughs. “But from that first day, I knew that these songs had to be recorded somehow.”

As Melody recounts, though there was not an instant decision or moment to put- together “a band,” the energy off that first jam was good, and the proverbial connection could be felt. “When I hear music transcend from being a demo to having that energy of being played live with other musicians, it’s an overwhelming feeling: hearing other musicians interpret the music in a way I could never have imagined for myself…” she says. “I never took drugs or anything like that, but I guess this is the closest I can imagine to getting that sort of high.”

And it’s not a stretch for listeners of all kinds of music to hear that very same effortless intensity and collective energy with each spin of “Laman.” The music is both enchanting as it is driving, undoubtedly pushed forward with the hard rock rhythmic backbone of Gemora’s drums and layered with all sorts of sonic textures courtesy of Nievera’s angular approach to guitar lines and layers. As Wolf likes to describe it, Del Mundo’s lyricism is provocative, and certainly teeters between being catchy and well, almost refreshing for the times. “Tigang ako sa puso mo / Bukod sa puso ko, laman – tikman mong paulit-ulit.”

“I was very excited when I was writing ‘Laman’ back in early 2019, because it was my first Tagalog song and the words … they just flowed in a way that was… poetic,” Del Mundo recounts. “And I knew that it was a song that everybody wouldn’t appreciate – and that was the beauty of it: I wasn’t writing a song for everybody, I was writing a song for me… I mean it’s cool if some people like it, but it was a lot more important to me that it was something that came from me.”

“Just the other day, Melody was texting me that there were people who didn’t like it – relatives and friends who were actually offended by it.” says Gemora. “And me, being a rock and roll rebel, I feel bad for people who don’t get it; I mean, when I first heard it, I was like ‘holy shit… these words;’ it’s sexy, racy… it’s everything rock n’ roll is supposed to be; it’s supposed to push buttons, so I guess we’re doing something right.”

Curently, the Mellow Dees aren’t stopping to admire their work with ‘Laman,” as they are hard at work at recording their other songs with a co-producer Anjelo Alonte, a flamenco guitarist Gemora met at a local event. After introducing himself, he discovered Alonte was a huge Wolfgang fan, and the two got to talking. Ultimately, Alonte – who is a creative director during the day, offered to help produce the songs and hooked-up the band with a music collective in Silver Lake which then gave the Mellow Dees access to a full-blown professional recording studio, which was an invaluable contribution to getting things going.

“We’re really stoked, because as exciting as ‘Laman’ is, the other songs are just as exciting – they’re really different – people are really going to get a diverse collection of songs,” Gemora reveals. “We’re mixing the second single now and it’s a totally different vibe. There’s going to be eight songs, and there’s even a track that features both Tagalog and English lyrics, and two songs we’re leaving out purposely (which I already recorded drums for…) since they don’t exactly match the vibe of this batch of songs; Melody’s already coming up with new songs as we speak, so this first album is basically a culmination of the songs she wrote pre-pandemic, and the new songs – man, it’s a totally different beast since it’s The Mellow Dees in full-force, writing songs from scratch.”

“The goal for me is to sing a song like ‘Laman’ in a big-ass rock festival, with people dancing along-to it even though they don’t have a clue what it means,” laughs Robin, when asked what the ultimate goal of the band is, considering that there’s quite a number of hurdles (like distance, logistics and the challenge of getting people to lend their ears…) the band has to navigate through, being a collective based in the US. “It’s music, and that’s the point of all of it: to enjoy it whatever or wherever it comes from. I mean, you have all these Filipinos paying so much for K-pop, so it makes you wonder why not pay to listen to music that comes from artists like us? So, the only way to stick it to people is to show that other people can appreciate what we’re doing, like ‘look! Everyone else likes us, why don’t we like us?!!”

“Personally, looking beyond completing the album, we want to keep playing to as many people as we can; it’s just really fun getting the music out there and performing,” Gemora shares. “It’s really a matter of us telling the world ‘You may not understand what we’re saying, but you’re definitely going to feel it… you’re gonna feel us.’ It’s not the words man, it’s just the conviction and that feeling you get when you hear good music. I’m hoping we can do that.” FIN