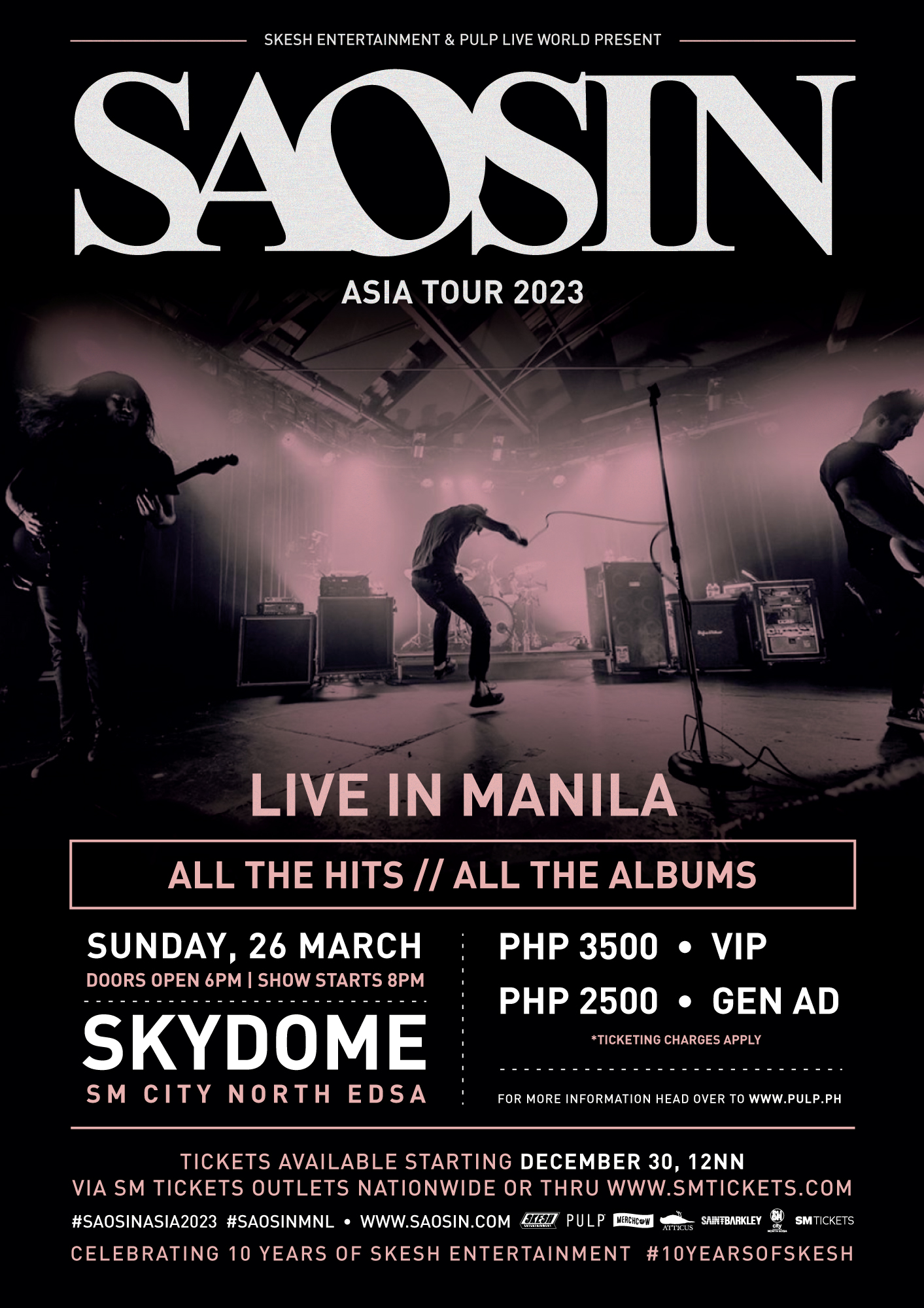 Let’s set off our emo hearts and prepare to bang our heads to the tune of the tracks of one of
the most sought-after American rock bands, SAOSIN, as they head to the Philippines with a
massive solo tour!

PULP Live World together with Skesh Entertainment proudly announces SAOSIN ASIA TOUR
2023 LIVE IN MANILA happening on March 26, 2023 at Skydome, SM City North EDSA. This
show is a trip down memory lane and an experiential chronicle of the band’s epic journey in the
music industry as we witness them perform all their albums and hits live at this special one-night
show in Manila!

SAOSIN originated in Orange County, California in 2003. Since its inception, the band has
released three studio albums, three extended plays (EPs), and eight singles. Their first EP,
Translating The Name, became their ticket to success as it was greatly received by a generation
of emo and post-hardcore rock fans in the US. As soon as its release, it immediately earned
over 62,000 album sales. At the present, SAOSIN has released a vinyl version of the said EP
together with a special merch collection which has also immediately sold out after a few weeks!
In 2006, SAOSIN released its first full-length album, Saosin. The album is welcomed with good
feedback from music critics and listeners. The first single, &quot;Voices&quot; was listed on the “Top 46
post-hardcore songs of the 2000s”, and the second single &quot;You&#39;re Not Alone&quot; was listed on the
Top 10 Essential Emo Power Ballads by the Alternative Press.

Their second studio album, In Search of Solid Ground, and third studio album, Along The
Shadow followed the success of their previous album and singles. Aside from sold-out albums,
SAOSIN’s career soared as they went on consecutive tours from the US going all the way to
Europe, Asia, and Australia. It was indeed a triumphant story since they are a band who started
as front liners of other bands and then, they get to travel around the globe as they headline
huge music festivals and do their solo shows.

In 2023, SAOSIN is set to conquer Asia, including Manila as one of their stops, with a gigantic
solo show that will surely trigger nostalgia in the hearts of their long-time fans. Singing all their
albums and hits, cover to cover, SAOSIN members Anthony Green (Vocals), Beau Burchell
(Guitars), Chris Sorenson (Bass), and Alex Rodriguez (Drums), invite all Filipino emo and rock
fans to join them in this one-night special show.

On March 26, 2023, let go of your control and just go with the flow of your emotions as SAOSIN
takes us on an explosive musical journey! Catch them live at SAOSIN ASIA TOUR 2023 LIVE
IN MANILA at the Skydome, SM City North EDSA. Doors open at 6PM and the show starts
at 8PM. This show is powered by Skesh Entertainment and PULP Live World. Secure your
tickets starting December 30, 12NN via SM Tickets outlets nationwide or online thru
www.smtickets.com.