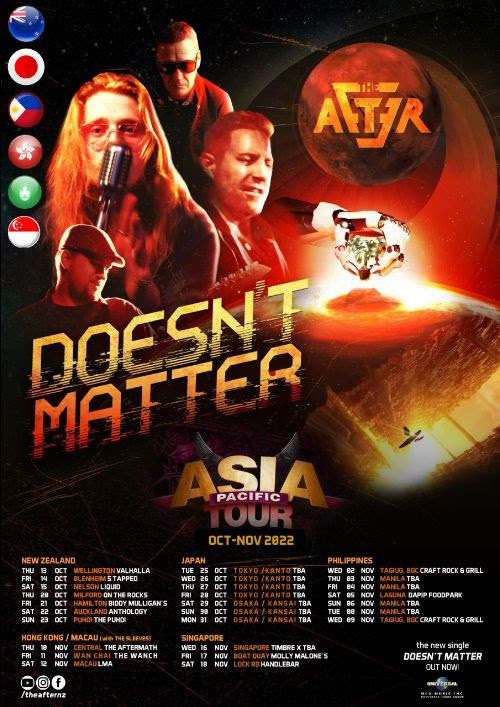 THE AFTER announce an Asia/Pacific tour

The After don’t like to cool their heels for too long, so, having just finished a ten-date summer tour of New Zealand, they’ve announced they’ll be embarking on an Asia/Pacific tour this October and November. Kicking off in Aotearoa, the tour takes in Japan, the Philippines, Hong Kong, Macau and Singapore.

‘Doesn’t Matter’ is also making quite an impact on the nationwide Radioscope Rock radio chart, starting at No. 28 upon its initial release and leaping up to No. 9 for the week ending March 6. We’ll be keeping a keen eye out for the next edition!

Songwriter/bassist Andrew Featherstone had a good catch up with Radio Hauraki’s Chris Key on the Hauraki Night Show during The After’s summer tour, take a listen here.

And Muzic.net.nz gave ‘Doesn’t Matter’ a great review: “One can imagine this being a real banger in concerts, with all the crowd singing along when the band crank it up…by the end it is really rocking. Superb.” – Kev Rowland

‘Doesn’t Matter’ was released to the world at 2.22am on 2/2/22, via Universal Music Group (UMG). The song is a classic slice of alt guitar pop/rock fused with a touch of reggae, and an explosive anthemic chorus. It was co-produced by Andrew Featherstone and Grammy-nominated, ARIA-winning UK producer Steve James (Sex Pistols, Monty Python, Thin Lizzy, The Jam, Weta (Geographica), Paul Young, Cold Chisel, Screaming Jets and many more).

The song’s writer Andrew Featherstone says of ‘Doesn’t Matter’, “It’s good to be reminded of a longer-term view of humanity and life – Earth’s species’ survival instincts drive us beyond any overthinking that we’re perhaps indulging in too much of late…”

The After’s track ‘Clear to Me’ was our most-played Rock track last year and ‘Doesn’t Matter’ is off to a cracking start.’ – Grant Hislop, Juice TV/The Station, NZ

‘Nice track. Great sounding and really tight. Fits in well with our format and has a “I’ve heard this before” feel with clean vocals and great guitar work. Radio-friendly, and good to see what these guys have coming up next.’ – Max, 2XS FM, NZ

‘One can imagine this being a real banger in concerts, with all the crowd singing along when the band crank it up. The song slows down near the end, but then it starts to build the drama, and by the end it is really rocking. Superb.’ – Kev Rowland, Muzic.net.nz

The After’s debut single ‘Clear To Me, released on 21/01/2021, received airplay on over 500 radio stations worldwide, featuring in (and topping) several radio charts in the US, Europe and NZ. The music video directed by Craig Walsh (creative director of The Pink Floyd Experience) was the most played rock song for the whole of 2021 on New Zealand’s Juice TV.