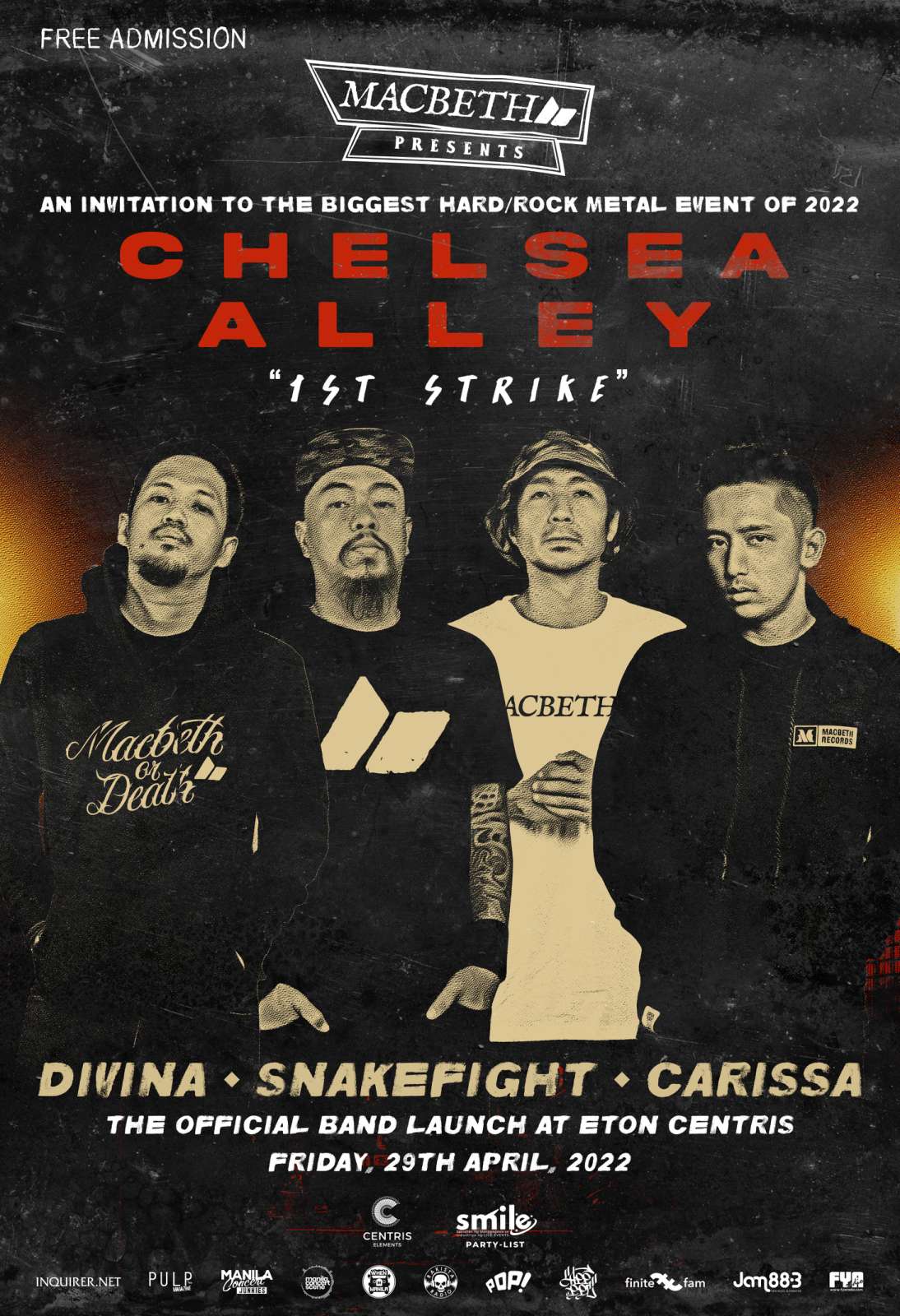 The long wait for live events to come back is finally over, and throngs of excited music enthusiasts and loyal fans can’t seem to contain their collective excitement any longer – bar gigs and special events have been happening and it is truly an exciting thing that the local music scene is opening up again. But leave it to Macbeth Philippines to be on the forefront of pushing the envelope and leading the charge for Philippine local hard rock and heavy metal, as the cutting-edge lifestyle brand is proud to announce its very first grand production in the form of the launch of its official artist CHELSEA ALLEY.

Formally dubbed Macbeth Presents: Chelsea Alley – 1st Strike, the band’s first official public appearance and concert happens this April 29th, 2022, at The Elements at Eton Centris (located in the heart of Quezon City…) as fans of local hard rock and heavy metal are expected to rejoice and flock to the event, since there truly isn’t any other of its kind and/or magnitude happening this early-on in the year. The show – which is 100% free admission to any and all – promises to be the biggest and the loudest, and also features three up and coming opening acts, namely popular pop-punk outfit SNAKEFIGHT, Baguio-based hard rock act DIVINA and the dazzling CARISSA (aka Carissa Ramos) who are surefire musical superstars-in-the-making, and who will definitely pump-up the crowd and warm-up the stages for the evening’s salvo of gloriously heavy music.

Officially formed during the height of the pandemic in 2020, Chelsea alley is comprised of the surviving members of Philippine heavy metal legends SLAPSHOCK – guitarist Lean Ansing and drummer Chi Evora, who are joined by guitarist Ariel Lumanlan (currently also of ARCADIA fame and formerly of CHICOSCI…) and vocalist John Borja, a seasoned live performer and one-time contender to front international rock superstars STONE TEMPLE PILOTS. By Christmas of 2021, the band released their debut single “Heneral,” a heartfelt-yet-pummeling tribute to the late Slapshock frontman and their dear friend Jamir Garcia. Since then, the clamor and demand for a live show from the band’s seriously loyal fanbase has only been growing ever-so-strongly.

Which is precisely why Chelsea Alley: 1st Strike promises to be nothing short of amazing and ground-breaking for both veteran and new fans of the collective and of the genre in general. Again, this will be the very first time audiences will see the band together onstage, and will be the first time the public will be hearing the band’s other collection of original material live. (Incidentally, bassist Jose Siscar of local female-fronted modern metal act EVEN and PHILIA – another local heavy rock act featuring celebrity Arci Muñoz on vocals – will be handling live bass duties for the show…) So save the date, tell your friends and spread the word – April 29th is destined to be another landmark date in local rock history as one of the most exciting rock bands in the land finally makes its live presence felt. It is guaranteed going to be loud – and as the adage says – definitely one for the books. See you there!

And folks, please do take note of these health protocols and reminders for your safety at the event: