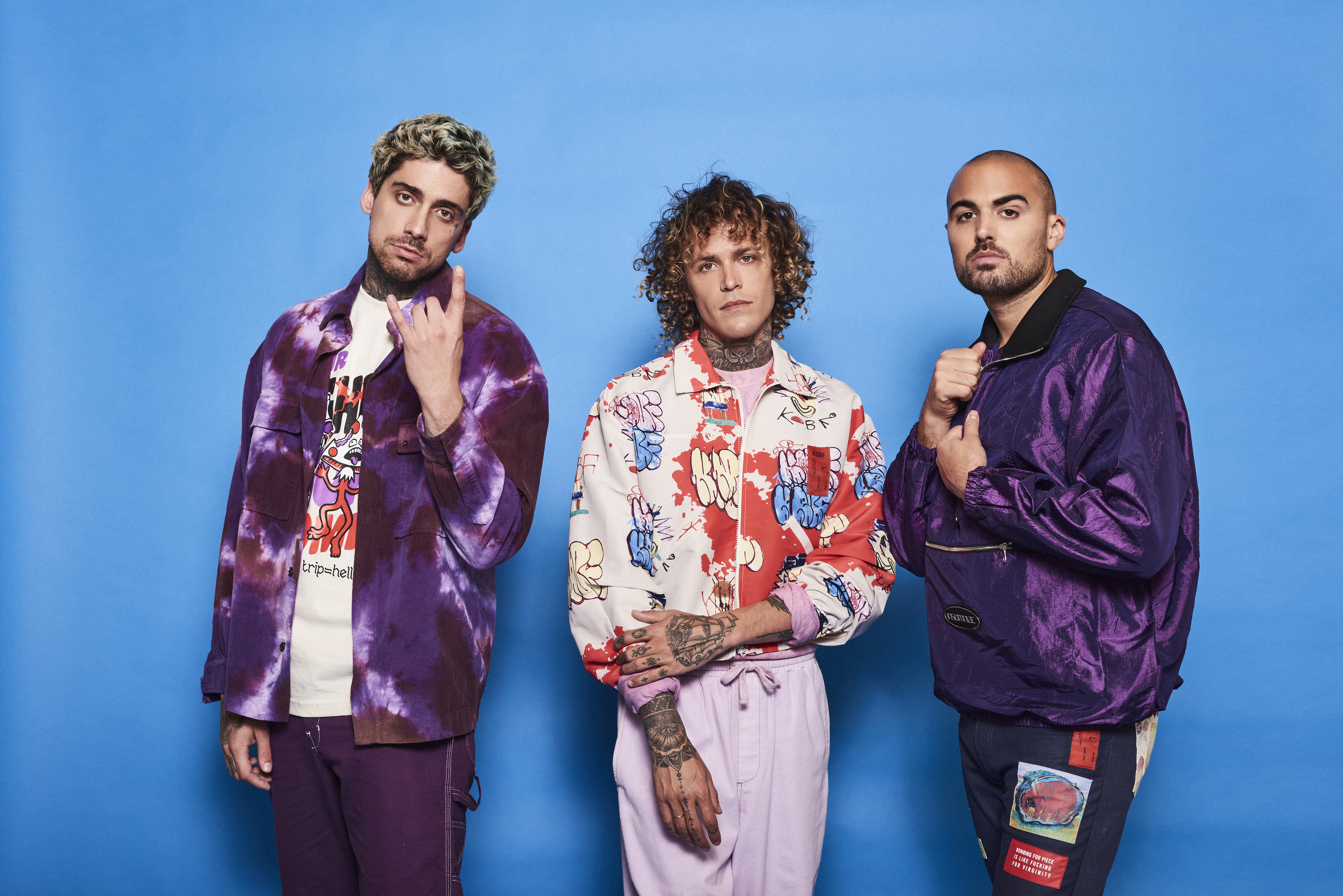 “This album we’re like telling more personal stories that are specific to us” – Matthew Russel on the release of, HELLRAISERS Part 2 the second album of their Trilogy part series.

The music written by Trevor Dahl, Matthew Russel, and KEVI seems to give us different and beautiful records with each member’s distinct style. Now, it’s for KEVI’s turn to share with us his flare in music through HELLRAISER Part 2 which is released last October 15.
Cheat Codes talk about why they decided to make more than one release of the album this year and share their experience in making their third single “Hurricane” by collaborating with Tyson Ritter, one of their childhood inspiration in making music and taught them to “stick on your own guns and ask yourself what makes you happy” in the music industry. They also explain about allowing people to discover which one of their songs they will like by listening to their songs instead of just a single which makes it one of the reasons for them release more records.

Cheat codes share more of their creative process and venture out of their usual sound in making HELLRAISER Part 2 in an exclusive interview with PULP. PULP: First, we’d like to ask how you guys are doing. Being in lockdown/quarantine in over a year, what kept you guys occupied? How was it dealing with the lockdown/quarantine?
Matthew: You know what, we just work on a lot of music and you know improve the house and play video games. Look at Kevi’s cool keyboard background that’s how you know he is playing video games.

PULP: We’re still in a tight unprecedented situation as of now, particularly for us in the music or entertainment industry, and upon listening to “Hurricane” – it speaks volumes of us aching for a normal life again. How was the overall process of creating the single with it coming out at a challenging time?
Matthew: We’re pretty open here, When we did Hurricane we knew the Grey guys for a while and couple of years and we always love their productions so it was cool to work on a song then they sent us an idea, The lyrics are angsty and talks about being 24 till we self-destruct that kind of vibes so we we’re like we should try to do this with a pop-punk legend. We hit up Tyson Ritter from The All-American Rejects. We grow up on those songs like I remember in a middle school dance and singing Swing, swing, swing from the tangles of, So that’s kind of like when I listen to their music back in the day I got the same feeling while working on “Hurricane” and it came all together that way. Luckily, we all live in LA so it wasn’t too hard to work.

PULP: What was the trio’s relationship with Grey and Tyson Ritter like throughout your creative process? What influence did they have on the single?
Matthew Russel: If you listen to the production it definitely sounds like a Cheat codes record and you can definitely hear the Grey production elements. They are very clean with their mixes, kind of poppy-sounding and good in guitars things like that. Tyson, he killed it. We have him come in the studio to record vocals and went back in forth lyric ideas. That’s the challenge when you do collaborations you want to make sure the person singing it feels authentic to them. It’s pretty seamless and worked out pretty well.

PULP: Any new learnings you gained from working with Grey and Tyson?
Matthew Russel: It’s really cool to work with someone like Tyson who has been doing it for so long while we are in Middle school or High school. The insight from him on what he went through with the music industry and how much it’s changed and kind of where his head is now because I think a lot of times you can kind of get wrapped up in doing music, fame, or just a lot of things that artists might take very seriously and then you go like 10 years down the line and you’re like “this isn’t actually as important as people try it to make seem ” that’s the idea of the song and the video we filmed that going through the music industry scenario and being influenced by someone trying to push the idea of something being really important on you that it’s not. I think you need to stick on your own guns and ask yourself what makes you happy. That’s the insight I got from Tyson for sure.

PULP: Moving to Hellraisers Part 2, with all its 13 tracks, was there anything you did differently? Or any different approach that you had in the writing and/or recording of the album? Was there any track that didn’t make it to the final form?
Matthew: Rosie, What do you think? The whole part 2 are inspired by Rosie’s songs because he is writing a lot.
KEVI: Definitely a switch out for Cheat codes, we’ve never done it before so doing it is cool. There was a couple of songs that didn’t make it around 3 or 4.
Matthew: We have that one record “Like I love you” that didn’t make the album.
KEVI: That one is sick.
Matthew: We’re originally doing just 1 album and then because of lockdown we all have this time so we ended up making a bunch of records. Rosie was working on lot of records on his own for like his solo project so he has his own music as well. We make some of it as cheat codes record and collab on them. Some of them kind of worked for the Cheat Codes sound and stay tuned maybe it end up having a Princess Rosie solo. PULP: What emotions would you like your listeners to feel after going through the whole album?
Matthew: Part of the Part 2 vibe we’re going for is kind of like emo mixed with hip-hop. Like music back in the day. People to have this in-depth personal lyrics. Sometimes when we make pop records they’re not necessary personal to us sometimes they are more about trying to relate to a broader audience so we did this album we’re like telling more personal stories that are specific to us and hopefully somebody might relate to like one song because they are going through the exact thing right now like heartbreak stuff or like one of my favorite song in the record is Horror movie and the idea is before the train wreck it’s like a warning to people to don’t get in this situation because it will end up being like a horror movie. Try to learn from my mistakes. I remember listening to songs like that back in the day around 13 or 14 and be like “What does this guy gone through? I hope I don’t go through that”

PULP: Given the quite melancholic atmosphere we’ve had due to the pandemic, is there anything specific you get inspiration from when working on your music?
Matthew: Part of the lockdown it felt like kind of weird to work on Club music for example. Everybody are stuck inside. We never want to like force anything. So even though a lot of people know Cheat Codes from our club records or dance records we’re not just going to do something because people expect us to. That’s where a lot of the Part 2 stuff came from. Less about being sad and melancholy more like the stuff we are going through and hopefully people can relate if you’re going through a heartache or tough time.

PULP: Are there any other music genres that you are looking into trying in the future? What aspect of your artistry that you would like to explore more or maybe get back to doing more often with your music?
Matthew: It’s funny you mentioned that because we’re actually bout to drop a punchy record.

PULP: Lastly, what do you make of how fans old and new have received the album?
Matthew: Creating an album in general. I just like how people gravitate towards a specific song whereas if you are pushing a single it’s like “no just listen to this one”. I like being able to drop like 5-6 records all at once that are brand new and allowing people to discover them themselves. I feel like the music industry right now is like competing for attention in whatever ways they can. When I got into music I’m used to discovering bands I see in shows and buy their CD to dive in their music and discover it.

Follow the release of their third single “Hurricane”, HELLRAISER Part 2 is out now with 13 new tracks.