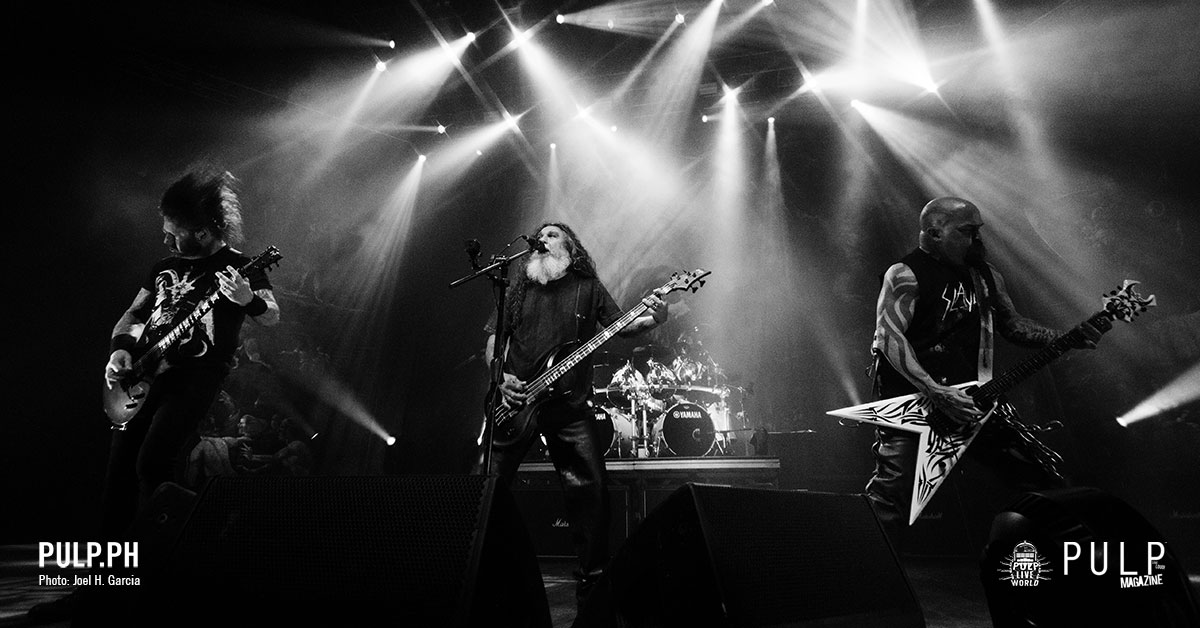 Slayer in Manila: In the Eye of the Metal Storm

Editor’s Note: This special coverage of Slayer in Manila was first published in PULP Magazine Issue No. 194 [March – April 2018].

There’s a long list of things I’ll probably never get to do, and one of them was to see Slayer live. Yet here I am in PULP’s headquarters, trying to describe the experience of witnessing what might just be the best heavy metal event that has taken place in the Philippines so far. If you were there, count yourself extremely lucky. Not only did you witness a legendary band still at the top of their game, but you were also there to see it before it ended. With Slayer announcing their last world tour in 2018, Manila will probably never experience crimson rain again. If PULP Live World was late by just a few months, they would have to live with the fact that they weren’t able to bring the band to Manila – something that they had been working on for almost ten years.

I guess God doesn’t hate us after all.

Still can’t believe it finally happened? Well, here’s proof that it did. Two months later, and our ears are still ringing. While you’re picking yourselves up in the aftermath of Slayer in Manila, here’s the after movie! Find yourself in the pit!#SLAYERinManila was powered by Tribal GEAR – Philippines and PULP Live World.* No copyright infringement intended.All copyrights belong to their respective owners.* BGM:Repentless by SlayerAngel of Death by SlayerNuclear Blast Records

The setlist that night spanned the band’s entire career. They opened with the title track of their latest album Repentless and then dove back into 1983 with “Antichrist” off Show No Mercy. After that was “Disciple”, an expected crowd favorite because of its blasphemous rallying cry, “God hates us all!” Next up was “Postmortem,” a song that would’ve worked better if it followed “Raining Blood” as it does in the album. Hearing this song come to a halt right before bleeding into the crashing of thunder, rain, and ominous feedback would’ve been insane. Still, the breakneck speed of the song did well to prepare the fans for another blistering song, “Hate Worldwide”.

“War Ensemble”, without a doubt, was one of the best moments of the night. Let’s not walk around eggshells here. The Slayer we saw that night wasn’t exactly the Slayer we grew up with. I’m pretty sure a lot of the fans in attendance were thinking the same thing. But if there was anything that might have changed their mind about it, it was probably this song. The performance had the exact same primal energy that you can hear in Seasons in the Abyss. Paul Bostaph and Gary Holt may never replace Dave Lombardo and Jeff Hanneman, but they do a damn good job staying true to the heart and soul of the band.

As much as I hate to admit it, the newer material, especially the cuts off Repentless, were parts where the show felt a bit dragging. Every time this happened, I just couldn’t wait for them to get to the next song – preferably, an older one. The band seemed to take note of this, too, because a considerable chunk of the setlist is composed of cuts from Seasons in the Abyss and older. The songs from Repentless, it seemed, were there because they were required to be.

That’s not to say that Slayer have deteriorated into a nostalgia act. In order to be a nostalgia act, well, you’d have to make the audience feel nostalgia. I can’t talk for everyone, but it wasn’t nostalgia that I felt at all. I felt the opposite, actually. I felt like I was hearing these songs for the first time. I heard “Mandatory Suicide”, “Dead Skin Mask”, “Hell Awaits”, and especially “South of Heaven” with fresh ears. Maybe it’s because this was my first time hearing them live. Be that as it may, it doesn’t take away the fact that a band who has been around since the ’80s with half of its original members gone can still pull it off like they were just getting started. Their most recent material might not be up to par with the older stuff, but in terms of live performance, Slayer is still at the top of their game.

The band ended their set with the unholy trifecta of “Raining Blood”, “Chemical Warfare”, and “Angel of Death”. The band drew out the intro to “Raining Blood”, allowing the fans to bask in the moment for a while. They waited for this for ten years, after all. When the galloping riffs kicked in, a wall of death ensued. Then came “Chemical Warfare”, a fast and violent thrasher that, unfortunately, felt more like a breather in anticipation to “Angel of Death”.

“Angel of Death” is a hugely popular song. It’s one of those songs in heavy metal that was able to break through the genre barrier. That’s why it’s not surprising that absolutely everyone knew the words to it. They probably wouldn’t have stopped if they weren’t so busy moshing. Tom Araya started it off with his high-pitched scream, and yes, dear loser who wasn’t there to hear it, it still sounds exactly like on the record.

By the end, everyone was in a daze. The house lights came up, and Araya, King, Holt, and Bostaph all thanked their fans. After the mandatory giving away of picks and drumsticks, they disappeared into the backstage. We poured out into the lobby, some of us stunned to silence, others close to speaking in tongues. Despite our varying degrees of shock and disbelief, we looked at each other eye-to-eye, and all seemed to have the same thought in our heads. That actually happened. Slayer actually (finally) played in Manila, and it was fucking incredible. PULP

ALL HAIL. Thank you for this historic night for Filipino metalheads, @Slayer#SLAYERinManila pic.twitter.com/lsO0DmlEFT