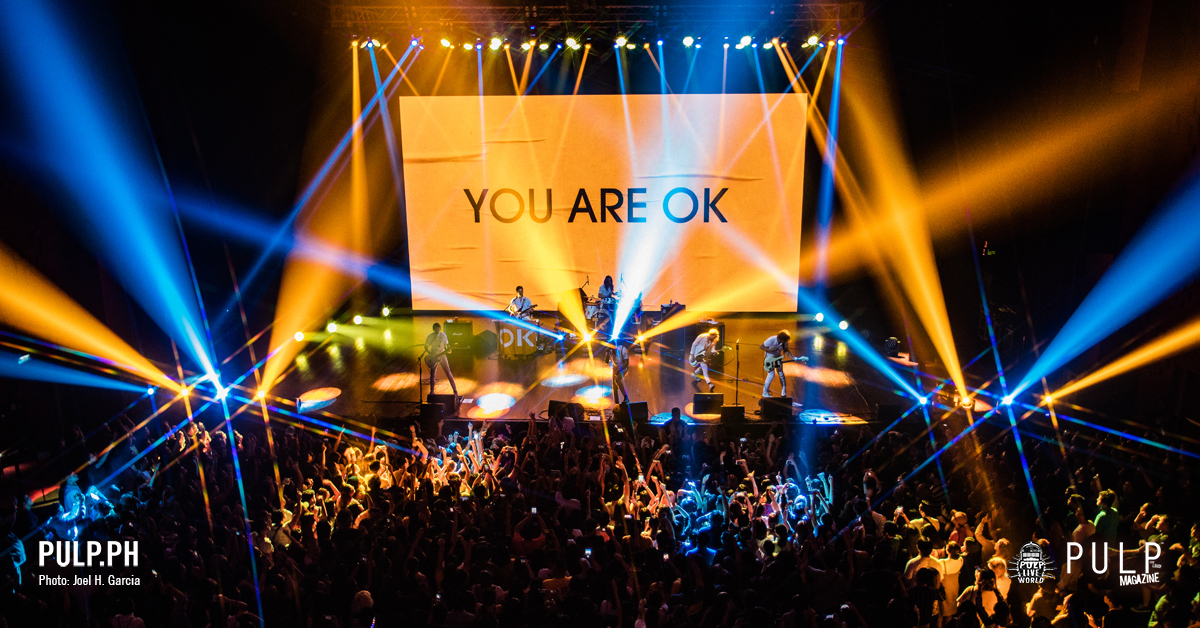 “WITH IT, WE FOUND NEW PLACES OF COMFORT.” — THE MAINE’S KENNEDY BROCK ON THE END OF THE ‘YOU ARE OK’ ERA AND THEIR UPCOMING LIVESTREAM SHOW

We’ve reached the end of an era.

It’s one that will fondly be remembered as a special chapter in the career of a band called The Maine, and one that will always have a special place in the hearts of fans given the strength and genuineness of its message: YOU ARE OK. And if you’re not right now, you will be soon.

It’s a message that has resonated so much and helped define for us what it means to look inward and to be honest with yourself and what it is you feel; to acknowledge your own numbness and brokenness. We are all the same broken parts, after all. Little did we know that such a message would be one of the things that would keep us going, especially at a time like this.

“Along the way, I think it was just important to be as honest as we could with ourselves, insofar as what we actually enjoyed and what we really wanted to share with people,” The Maine frontman John O’Callaghan told PULP a year ago, ahead of YOU ARE OK: The Maine Live in Manila 2019, powered by PULP Live World.

Read More: A Message From a Band Called The Maine: YOU ARE OK — PULP Magazine’s Special Coverage of YOU ARE OK: The Maine Live in Manila 2019

“I felt like the title was just more of an overarching kind of message that I don’t think people hear enough, and hopefully it’s something that has helped people and they take it for whatever way they need to take it,” added John. Indeed, with songs like “Slip The Noose”, “Numb Without You”, “Broken Parts”, “I Feel It All Over”, and so much more, what You Are OK provided for fans and the members of the band was a place of comfort.

WE ARE PLAYING A CONCERT. FEELS GREAT TO SAY THAT! See you there. https://t.co/fT63LfiA47 for tickets and bundles. pic.twitter.com/aKTVVXL251

Even as we’re set to say goodbye to such an important era for the global 8123 community, the importance of the message it has given fans will remain unchanged. In this #PULPExclusive, we caught up with guitarist Kennedy Brock who talks excitedly about their upcoming livestream event. He reflects on what You Are OK means for the band, and shares a bit on how Flowers on the Grave came to be and what fans can expect. And also, what lies in the future for the band as this chapter comes to a close.

PULP: How have you been dealing with these unprecedented times as artists, perhaps individually or as a band—especially one that’s pretty close to fans, given how the pandemic pretty much changed the way artists would connect with their fans? No shows, no concerts…

KENNEDY BROCK: It’s strange because at first, it felt like it normally does to come home from tour. Because, usually, when I arrive back home, everyone is busy with work and life so the first week by yourself feels like you are in quarantine. But, that faded quickly because we quickly reached the date where we would’ve been back on the road. Once it set in that shows wouldn’t be a thing for a long time, we started turning inwards. We’ve always been about social media and connecting virtually so we leaned into that. We created a new way to be involved with our fans called Pillar. Inside that, you will find more The Maine content than you ever thought possible—new ways to interact with us and each other. And with that, we have opened up our world even more. Just last week, I started making guitar tutorials for our songs. And I have a storytellers series, too! Fun stuff that would’ve probably remained dormant if it weren’t for the pandemic.

For me, personally, video games have been an incredible way for me to still “hang” with my friends and our fans. I’ve joined a group of other 8123 members playing games like MarioKart. There are plenty of ways to stay connected and we are still discovering how.

Oh, and new music. We’ve started working on new music. And a live-streamed show closing out the YAO cycle.

PULP: How did the idea for the live concert ‘Flowers On The Grave’ come to be? What were the initial discussions like, and when did you start conceptualizing it? Eventually, how did the idea come to life?

KENNEDY: We’ve had this idea long before any pandemic… but with people. The only difference is that we now get to play the show to a lot more people because of the internet. You can’t come inside the venue but you get to experience a show from your bed, which gives a whole new meaning to the live show question, “You guys awake out there?”

As the pandemic has gone on, we’ve decided that the best thing for us to do is to play a show in the most live way possible. And to try to make the whole night feel special. If you know us, then you know that it is our top priority to provide you with an experience you won’t forget. The rules have changed in the pandemic but we still plan on giving you our best.

PULP: Can you let us in on what happens behind the scenes? What are actual preparations like for an online concert, and is it as laidback as people might expect given that it’s unlike an actual show? Why the Orpheum Theater?

KENNEDY: It’s both at the same time—laidback and not. I’m not pressured by it, and only excited. Though we have been trying to get all sorts of things in order that would not normally be on the list. So I’d say it’s been tricky to get everything put together. The Orpheum Theater is a beautiful spot, and since we started off the record there and have a good relationship with them, we felt we had to go back. This time making it for anyone and everyone who wants to join!

PULP: What’s the most challenging part of putting this together for fans?

KENNEDY: I’d say making the fan feel like they are at the show. It’s been the only real topic of discussion. The rest of the show is going to happen like a general show would. But it’s really been our focus to make it feel interactive.

PULP: What can fans expect from the upcoming online livestream event?

KENNEDY: Well, this will be our first show of the pandemic, the last of the era, and most likely the year, so I know how much excitement we will be bringing to the stage and performance!

We’re definitely going to pay tribute to You Are OK the best we can. And I’m looking forward to the virtual crowd interactions! This is new to everyone so that should lead to some unexpected entertainment! It’s going to be a whole night of fun! Tune in!

Stuff is getting real! Flowers On The Grave. Saturday! pic.twitter.com/bDRomdvKHM

PULP: So this is the end of YOU ARE OK and this isn’t the first time you’ll be closing off an album cycle in a grand manner. What goes through your minds when such a chapter comes to a close? Is it more of a sad/bittersweet feeling as you approach the ending, or is it an ending that has to happen in order for you to look forward to what’s coming next?

KENNEDY: Usually by the time we are winding down a record we have already gotten stoked on something new. Our eyes on a new prize. So for me, it’s never sad. It’s freeing.

Also, I love that we get to send off the previous message with a bang and celebration.

And don’t forget that while playing live shows, the songs from our previous records get to live in new forms as we adjust things to fit whatever style that is then currently being exhibited.

“I think it was a bold album. And like the ones before it, I think it paved the way and laid the foundation for what we are about to do. This album was an album that reached far away from our comfort zones. I’m proud of that. And with it, we found new places of comfort. We are more focused because of it, and more wise.” — Kennedy Brock

PULP: Years from now, when you look back on YOU ARE OK, how would you describe its place in the band’s journey? What’s the most important thing that you are taking away from this album cycle?

KENNEDY: I don’t know yet. But right now, I think it was a bold album. And like the ones before it, I think it paved the way and laid the foundation for what we are about to do. This album was an album that reached far away from our comfort zones. I’m proud of that. And with it, we found new places of comfort. We are more focused because of it, and more wise. It’s been my favorite to play live, and I look forward to doing it all out one more time!

PULP: As of now, do you have a picture of what comes next after this? And does the current situation play a role or influence how the next The Maine record is going to take shape?

KENNEDY: It certainly played a huge role. The game has changed. We have a pretty dang good idea of what we plan to do. But as of now? Most of the future is still in the planning phase. There’s a lot to account for right now and there will be more changes to the norm, I reckon.

We’ve started writing new material and are jacked up on it! Big things for sure, but the when and how is up in the air still.

Be safe out there! Can’t wait to see you again! PULP

Flowers on the Grave, presented by The Maine and Pillar Music, is a Livestream Concert Experience happening on August 30, 2020 at 7:00 AM Philippine Time (August 29, 2020 4:00 PM Pacific). Tickets are priced at $10 and are on sale now at www.themaineband.com.

PULP Magazine also has an ongoing giveaway for tickets to this event: