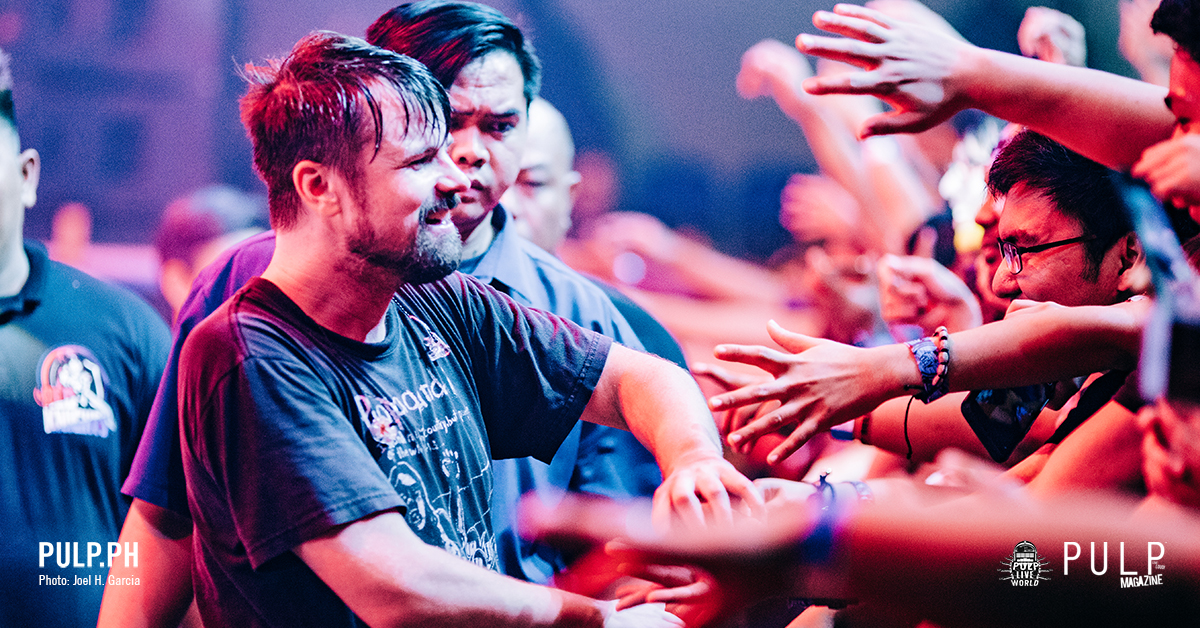 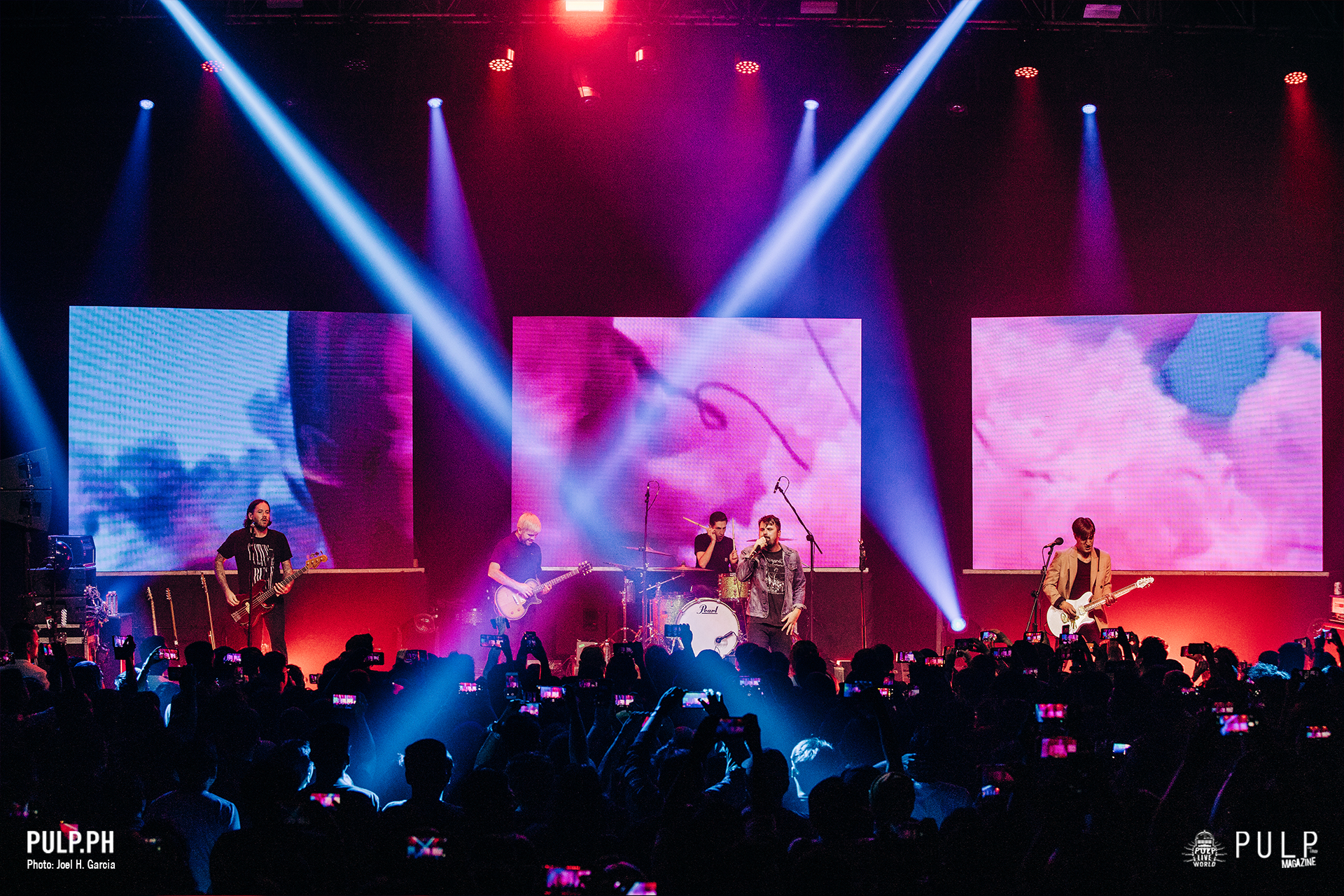 This special and exclusive coverage of Silverstein 20 Year Anniversary Tour in Manila was first published in PULP Magazine Issue No. 205.

“There’s a huge baseball/football stadium in Toronto that could hold up 50,000 people and we call it the SkyDome. I told my parents, ‘Hey, we’re gonna play the SkyDome.’ And they were like, ‘Oh my God, really?’” The crowd laughs as Silverstein frontman Shane Told tells his story right after playing their latest single “Infinite” live for the first time ever—yes, Manila was the first to hear the track from their new album A Beautiful Place To Drown. “Well I just told them, ‘Yeah!’ and they still think we’re playing the SkyDome. I don’t wanna break their hearts, you know?” 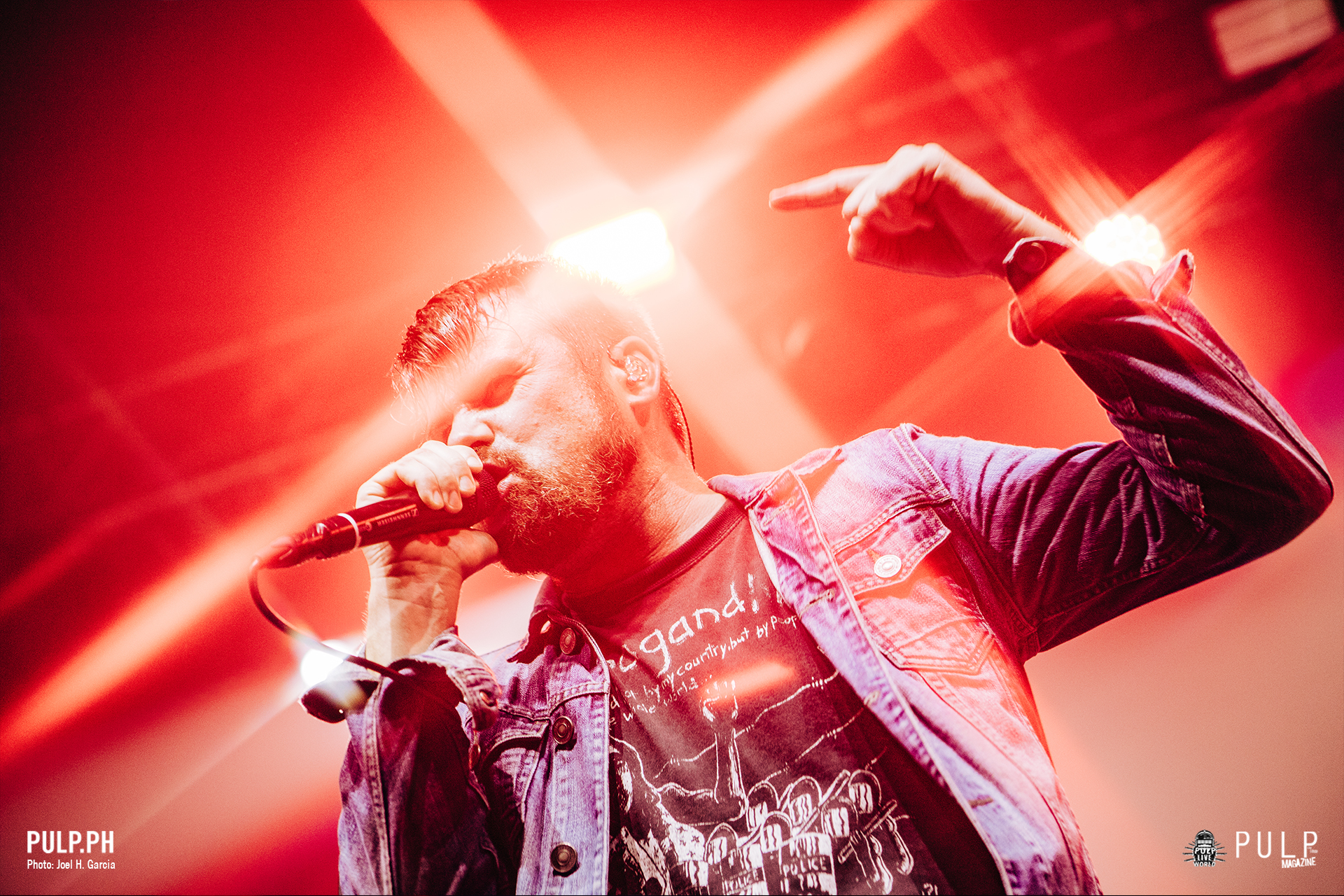 That story may have been told in a much smaller SkyDome located miles away from home in Quezon City, Philippines, but it was undoubtedly one of the best and most special shows that Silverstein have played out of over 2,500 gigs they’ve done throughout their two-decade career. For one, the PULP Live World-powered concert (held last January 12, 2020) kicked off the band’s 20th Year celebration. Secondly, the show had been a long time coming—it had been eight long years since they were last in Manila and their Filipino fans never really lost the connection that they had with the band’s timeless music. Lastly, the show was absolutely sold out. So yes, Silverstein could say that they did sell out the SkyDome!

Our hearts bleed no more! What a great show to kick off 2020—we welcomed Silverstein back to Manila with a SOLD OUT…

“I think this goes back to when we first started getting some numbers back about social media—‘Oh, these are the places in the world that a lot of people are listening to our stuff or checking us out…’ #1 was USA, and #2 was the Philippines,” says Shane Told in a sit-down interview before they’d take the stage, discussing what it is about Manila that made them decide to include it in the band’s 20th Anniversary Tour. “And ever since that last show, we were trying to come back and the fact that it worked out well into our 20th Anniversary, and we were able to celebrate the last 15 years of music we put out, and 20 years of being a band is really, really cool. And also with our new record coming out and our new single just dropped… So it’s really, really exciting to have all of this stuff happening all at once.”

“I think this goes back to when we first started getting some numbers back about social media—#1 was USA, and #2 was the Philippines.” — Shane Told

And so from the moment Shane (lead singer), Paul Marc Rousseau (guitar), Billy Hamilton (bass), Josh Bradford (guitar), and Paul Koehler (drums) took the stage and opened the show with “Smashed Into Pieces,” up until they closed it with “Bleeds No More”—and even during their VIP Meet and Greets after the show—every moment on January 12th was special.

Silverstein played two sets—a “greatest hits” set, and a set where they played their 2005 breakthrough album Discovering The Waterfront front to back. But as nostalgic as the show was, they also had us looking forward to another decade of music. During their first set, Silverstein unleashed two songs from A Beautiful Place To Drown: “Infinite,” as previously mentioned, and “Burn It Down.” It was just days before the show that the band had released “Infinite,” yet during the show it resonated to fans as if it had been a life-long anthem. 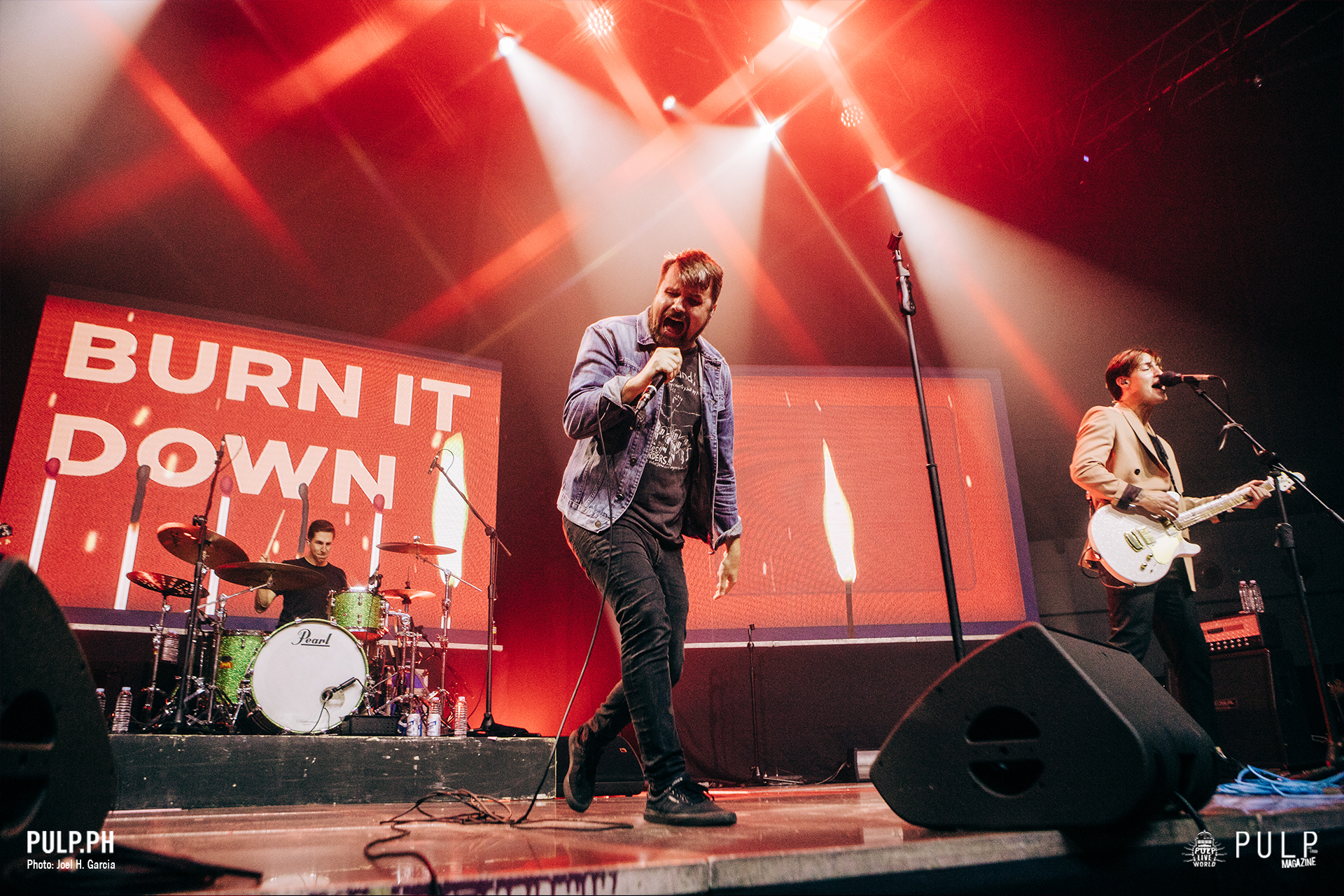 But on whether or not the album, as a whole, have similar themes, drummer Paul Koehler discusses the broadness of A Beautiful Place to Drown. “There’s a bit more broader lyrics on this one and it’s kind of taken from a place that’s open to [the people’s] own interpretation. For example, for ‘Infinite,’ I feel like there’s a lot of people that can relate to that, and to different degrees, obviously. Like, whether it’s just something in their life or the way they’re feeling and they don’t know why they feel that way, or kind of just being trapped in their own mind, a downward spiral, basically… Every song kind of has that. I think we kind of aimed to write individual songs that stood on their own and at any point [people can] listen to it, and interpret it and enjoy it. But there are some themes that intertwine, it all kinda connects in the end.”

It is this relatability that keeps the connection between Silverstein and their fans strong. It has gotten stronger throughout every album, through every year. Here they are, two full decades on, still evolving and writing music that reaches to the core. “You can be as loud as you want, you can dance however you want. You can be whoever you want in our show, it doesn’t matter. Everyone is welcome here,” says Shane Told at one point during the show, and somehow it made sense how they’ve made it to the 20-year mark. The community they built their music around is one that has hurtled through adulthood alongside them, and this is how their songs feel so genuine. 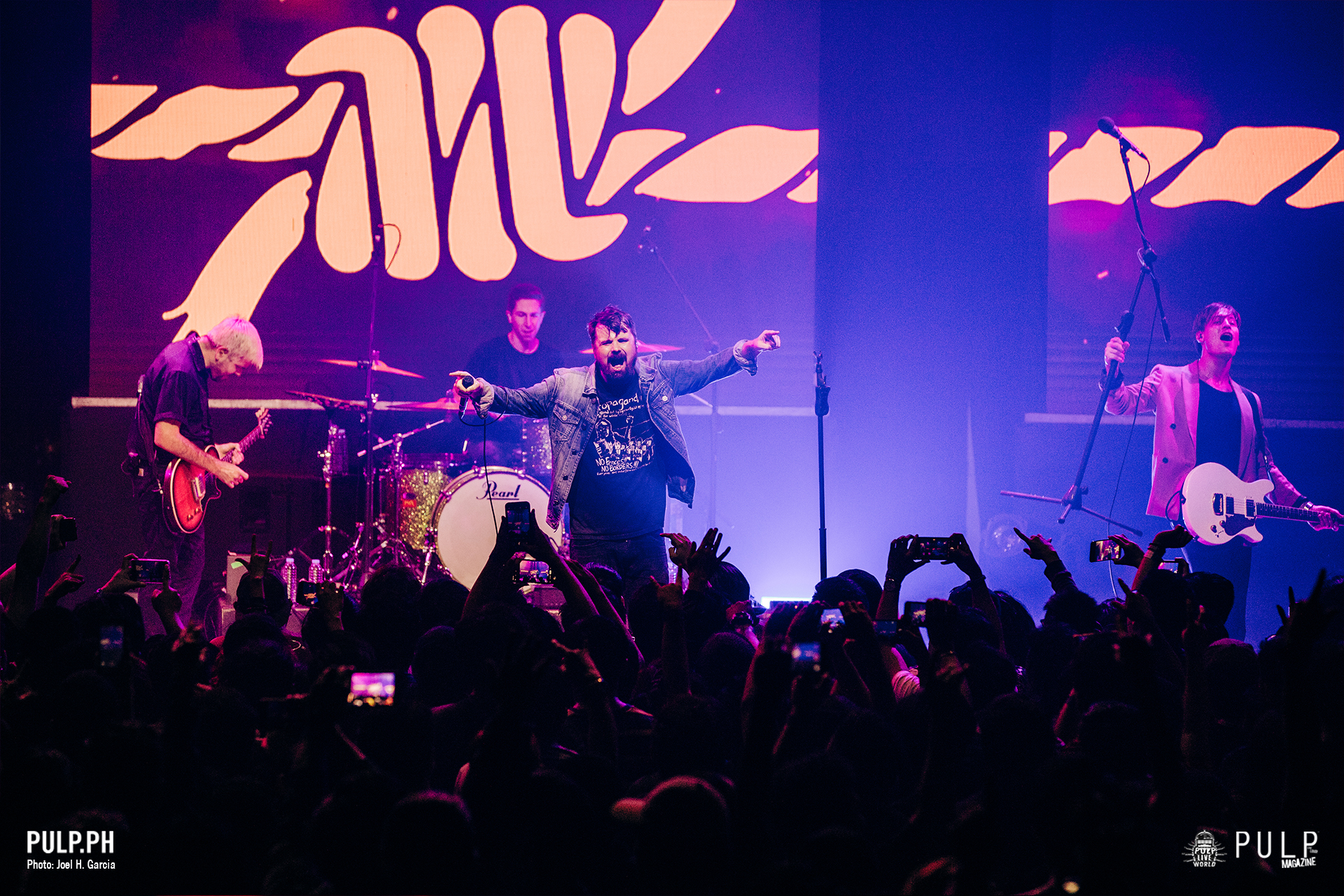 Reflecting on 20 years of Silverstein, Shane and Paul think about what keeps all of this still exciting for them as a band. “It’s amazing how many new experiences we still continue to have,” he says, and then proceeds to tell a story of how just days prior, they were stuck at a rural house in Australia that was like a cabin in the forest. As he tells this story, he doesn’t know that, after the Manila show, they would be stuck in Manila for two more nights due to flights being canceled following the eruption of Taal Volcano in Luzon. As of this writing, we have no information if they’ve encountered further volcanic activity at their next stop—Hawaii. “There’s always new things, good and bad, that happen and make this journey [enjoyable]. There’s never a dull moment, and that’s what we live for and that’s why we do it.”

“Thank you so much for the love and the undying support. I see the Instagram comments, the Facebook posts, like, ‘When are you coming back? Please, please, please,’ and finally we’re here again and it’s great that it can be a part of a special tour when we’re celebrating our milestones,” Shane says in a message to their Filipino fans. “Thanks for being patient, hopefully won’t be that long again and yeah, it’s exciting to kick off the twenty-year campaign for us,” Paul ends.

One thing is certain—that show in Manila earlier this year was one that the band and their fans won’t forget anytime soon, or at all. The energy that the band and the crowd had shared in that room was incredible, and PULP Live World truly gave the decade the rock and roll kickoff that it deserved.

Sending 💜 to all of our friends/fans across Philippines as you deal with all of the affects of the recent volcanic eruptions. We love you and hope that everyone is safe and out of harms way.

As for Silverstein, although they got stuck in the Philippines following an explosive performance because of a volcano eruption, they still got to head home to Ontario, Canada telling everyone that they played the SkyDome, and that it was one of the best shows they’ve ever played. Nevermind that it wasn’t the massive Toronto stadium. It still makes for a great story—one worthy of being considered a highlight of the past two decades that they’ve been a band. PULP

Silverstein’s NEXT-LEVEL LiveStream Concert Event is happening on July 20, 2020, 4:00AM (Philippine time). Tickets are priced at $10 and are available here.