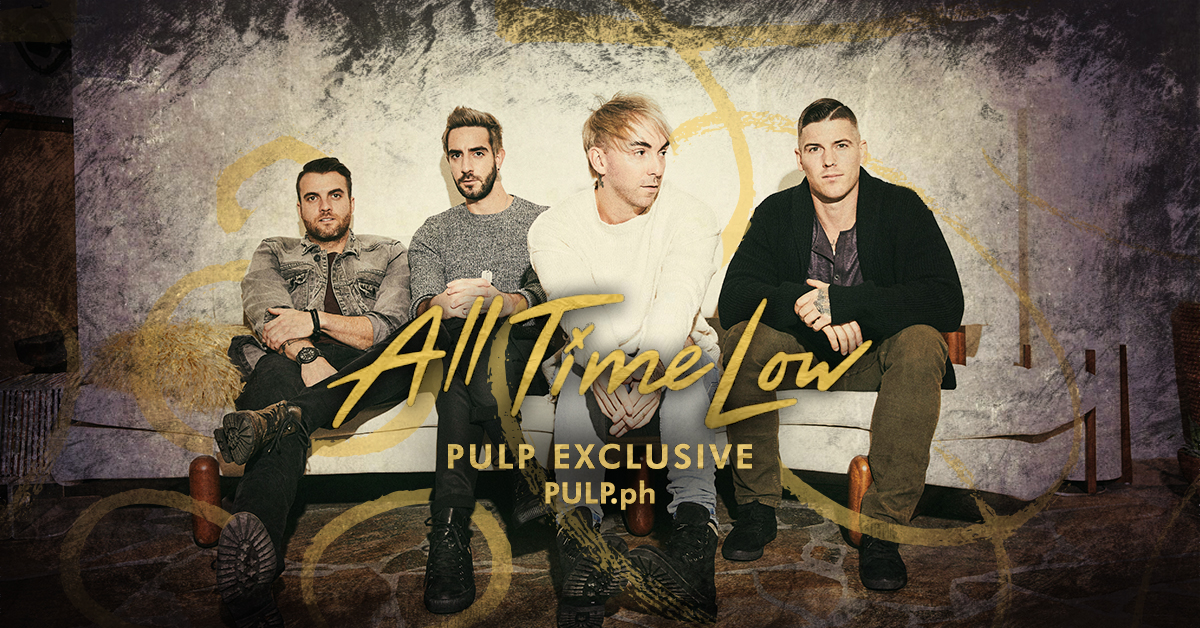 Words and Interview by Nic Angeles

After All Time Low’s 2017 record Last Young Renegade, it’s probably safe to say that nobody knew what to expect from the band for their next offering. Last Young Renegade saw the long-time band from Baltimore open a new and different, enigmatic chapter in their career.

They sought to take on what most found to be an unfamiliar direction, covering new ground as they strived to reach more heights. “[It] was all about  doing something different—shaking up what All Time Low was about and trying things that we’d never tried before,” reflects frontman Alex Gaskarth, looking back on their previous album. “We scratched an itch that had been growing and growing,” he continues, saying that they learned even more about themselves in the process.

The result? All Time Low came back swinging with their eighth studio album, Wake Up, Sunshine, which is arguably one of the band’s strongest releases to date. Released earlier this year on April 3rd under Fueled By Ramen, the album represents so much of what long-time fans have always loved about the band. However, to simply call it a “return-to-form” would be understating the depth and amount of thought and hardwork that came into the making of this record.

“I don’t see Wake Up, Sunshine as a ‘return to form’ so much as I think that we all took what we had learned and applied it to an album that we wanted to feel more up-beat and rock-centered,” clarifies Gaskarth. To him, not taking things seriously and doing some things they haven’t done in a while made for a “self-actualizing” process. It was in doing things in a more laidback manner that they were able to tap into some raw moments that made Wake Up, Sunshine into the solid 15-track album that it is. More than anything, the album paints the picture of how All Time Low turned from “stupid boys making basement noise” to some of the scene’s most enduring pop punk heroes.

Prior to its full release—with tracks like the back-to-basics cut “Getaway Green”, which they first played at a massive festival, the anthemic single “Some Kind of Disaster”, and the cozy banger “Sleeping In”—fans had much to look forward to. All Time Low were still a band that could have their fans at the edge of their seats, and when they first delivered the message “Wake up, sunshine. Somebody loves you.” on their socials, the anticipation was definitely there. The album, however, could have arrived under better circumstances.

All of a sudden, All Time Low found themselves releasing an album that they themselves were pretty excited about—one they’re also surely proud of—during such an unprecedented time that has affected so many aspects of any artist’s career. Postponements and cancellations were being announced left and right. There wasn’t gonna be a tour to promote the album on (at least, not in the near future). They couldn’t see their fans face to face. Yet, All Time Low saw in Wake Up, Sunshine an album that fans could connect to during such an uncertain time brought about by the COVID-19 pandemic. “Right now, people are in need of something to connect with and we hope this album is that,” says Alex. “I’m just so happy to see that this record is getting people through some hard times. We’re all collectively in a very weird place at the moment, and to know that our music can be a bit of an escape is awesome.”

“We’ve been trying our best to adapt to the ‘new normal’ and connect with our fans in ways we never thought we would,” he adds, which explains the many instances that All Time Low have been very present online through track-by-tracks, acoustic performances, and more. Through these efforts, the band has made their audience feel that they were all still together somehow by bringing them the sunshine, even when fans couldn’t be in one sweaty pit like they used to at a typical All Time Low show.

.@AllTimeLow‘s Wake Up Sunshine flies to a new peak at Number 3 following its release on vinyl & CD 🌞️ https://t.co/8VJyIyByay pic.twitter.com/EvfSQibOnK

Below is a conversation where PULP catches up with Alex to ask what they’ve been up to at this time and how they’re dealing with the situation. He talks Wake Up, Sunshine and trying to stay connected with fans, and also walks us through the making of their latest album. He tells us about the collaborations they’ve done on the record, and shares the challenges of releasing an album with the world on lockdown—all this and more, so read on:

PULP: First, we’d like to ask—how are you guys doing right now, given the lockdown/quarantine? What have you guys been busy with, how are you dealing with the COVID-19 crisis personally?

ALEX GASKARTH: I’d say that we’re all extremely lucky to be happy, healthy, and quite frankly, just a bit bored… Not to make this a “statement” response, but there are a lot of people out there right now who just don’t have the luxury to be bored and tired of being inside. There are a lot of people who are truly hurting. Is this a weird time to be promoting new music? Absolutely. But we’ve been trying our best to adapt to the “new normal” and connect with our fans in ways we never thought we would. On a completely different kick, my wife and I got three baby goats that have been keeping us super busy as well, so there’s that. Total insanity.

PULP: We’re going through something unprecedented, something that has affected so many aspects of any artist’s career. Something that got caught with all of this is the release of your new album. What was the biggest challenge of putting out Wake Up Sunshine when you did? Were you ever in trouble of postponing the release, or holding it off for a bit? What was going through your minds, basically, with the album coming out at such a challenging time?

ALEX: When it comes down to it, the most important thing in our minds was that we made an album we all loved, that speaks to where All Time Low is right now, and that we felt could bring some light and levity to anyone listening. We weren’t interested in delaying the release for chart positions or a more solid first week because right now people are in need of something to connect with, and we hope this album is that.

In a time of uncertainty and in the face of a challenge we are all facing together, nothing has brought us more happiness than to share new music with you.

We hope this album brings as much light to you as it has to us. #WakeUpSunshine is out now ☀️https://t.co/40evgyQANY pic.twitter.com/cpEkEdxE1k

PULP: To talk about the album itself, a lot saw it as a return to form. Was this always the goal going into the making of this album, coming from Last Young Renegade? If this was the case, what’s something you did with this album, songwriting-wise or recording-wise, that felt like really returning to your roots—perhaps something that you haven’t done in a while in your creative process?

ALEX: Our last record was all about doing something different—shaking up what All Time Low was about and trying things that we’d never tried before. We scratched an itch that had been growing and growing, and in doing so, learned a lot about ourselves and our band and what we were capable of. I don’t see Wake Up, Sunshine as a “return to form” so much as I think that we all took what we had learned and applied it to an album that we wanted to feel more up-beat and rock-centered. There’s some magic in the fact that we all got together under one roof for most of the writing and record as well. That’s something we hadn’t done in many many years… The process felt very celebratory and self-actualizing.

“When it comes down to it, the most important thing in our minds was that we made an album we all loved, that speaks to where All Time Low is right now, and that we felt could bring some light and levity to anyone listening.” — Alex Gaskarth

PULP: In contrast, anything you did differently? Or any different approach that you had in the writing and/or recording of the album?

ALEX: We didn’t take anything too seriously. Our setup was, from a recording standpoint, pretty basic. We’d set up in a room in an echoey house and jam until something felt great. When you solo out tracks on the sessions, you can hear people talking in the background. I recorded most of the vocals sitting on a couch singing into an SM7 which is by no means a fancy mic, writing the lyrics as I went. I think that being a bit more laid back helped us tap into some really nice, raw moments.

PULP: How did the collaborations on the album happen? Have blackbear or The Band CAMINO been friends of yours, and what is it that made them perfect for “Monsters” and “Favorite Place”?

ALEX: blackbear came into the picture through our writing / production collaborator, Andrew Goldstein. He’d been working with bear on new music right around the time that we wrote this song, “Monsters”, and suggested that we try getting him involved. I’ve always loved blackbear’s music and he’s always sort of been in our atmosphere but we’d never thought to try something together. The timing of this was perfect, and I think the song spoke to all of us creatively. Band CAMINO are label mates and such a good band that we had all been following closely since the beginning. We were so excited to have them be a part of the album, and I felt like “Favorite Place” almost drew from their style a little bit.

PULP: With all of its 15 tracks, is Wake Up Sunshine, in its final form, the way that you imagined it when you were first thinking or talking about making it? Did you have more songs written for the album that didn’t make the final cut?

ALEX: I had always envisioned this album being a longer one. The 15 songs felt perfect. There are plenty more ideas floating around but what we released here felt like a body of work that represented where we are right now.

PULP: What do you make of how fans old and new have received the album?

ALEX: I’m just so happy to see that this record is getting people through some hard times. We’re all collectively in a very weird place at the moment, and to know that our music can be a bit of an escape is awesome.

PULP: Lastly, album-closer “Basement Noise” feels like a very special song on the album and something about it feels very nostalgic as well. What can you tell us about how this song was written and what inspired it?

ALEX: Jack and I wrote this song at 3 in the morning before leaving the studio for the night. We realized we’d never truly written about how this band came to be, and all the chances we’d taken to get where we are now. “Basement Noise” is a tribute to that. PULP