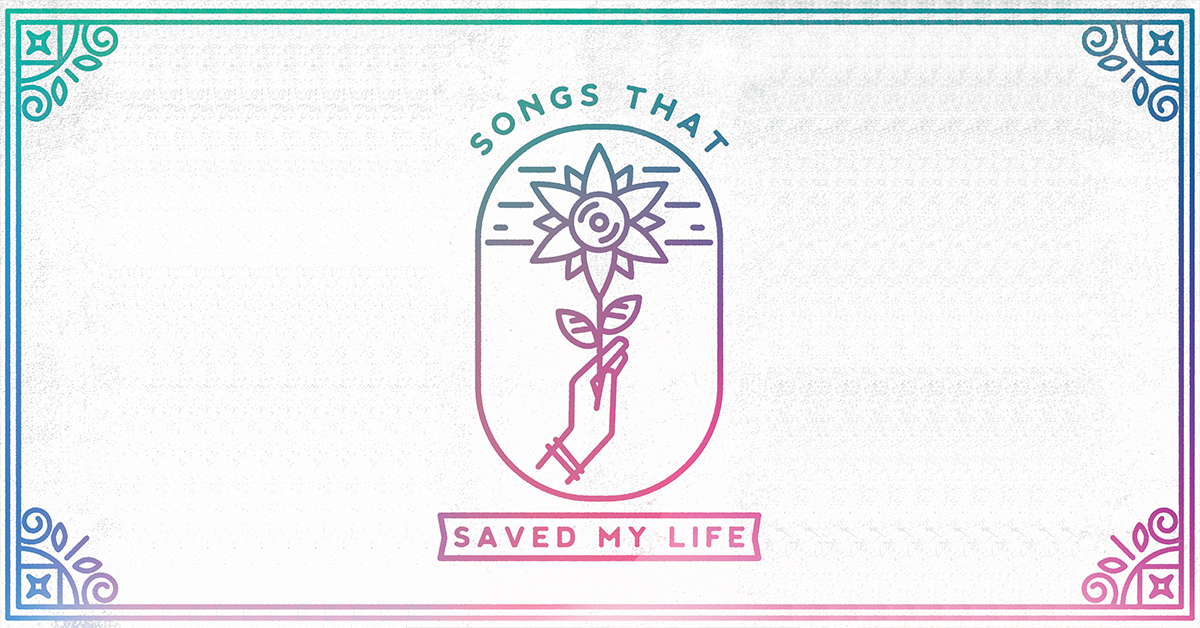 Words and Interviews by Nic Angeles

Countless people can attest to the power of music to save us from the very depths of our sorrows, as well as its ability to help us through some of the darkest times of our lives. Whether through a piece of music that sends out an empowering message, or an artist/idol that speaks and shares openly about their own mental health struggles, a lot of people are reminded that they are not alone—all because of an artist, an album, or a song that saved their life.

Hopeless Records, through their nonprofit Sub City, has been supporting mental health initiatives and charities for years now. This includes the many Take Action tours and Take Action compilations from as early as the 2000s. “We often discussed developing a specific ongoing project that would focus on mental health,” Hopeless Records founder Louis Posen tells PULP.

“I think the turning point was when we reviewed the applications for our annual Sub City $10,000 grant and noticed that so many of the applications dealt with mental health, suicide prevention and the important part music plays in helping those going through difficult times,” Posen adds, thinking back to the time that the idea of Songs That Saved My Life first came to their minds.

The Birth of a New Musical Movement for Mental Health

And so in 2018, the first volume of the Songs That Saved My Life compilation was released, much to the appreciation of fans, as well as the artists that had participated in the record—Hopeless Records acts Neck Deep and Stand Atlantic with covers of “Torn” (Natalie Imbruglia) and “Your Graduation” (Modern Baseball), respectively; Against Me! with “People Who Died”, originally by The Jim Caroll Band; Taking Back Sunday with The Smashing Pumpkins’ “Bullet With Butterfly Wings”; and more. The concept is pretty much easy to understand, but bands are not just covering songs on a whim; they’re making impressive renditions of songs that have somehow saved their own lives. “They may have themes or may be just one great song covered by a great artist with a powerful story,” Posen describes the project.

“We often get feedback that fans are so thankful that their favorite artist are talking about mental health and suicide prevention and that makes them feel not alone and connected with others who feel or have felt the same way,” Posen says, reflecting on the movement they started with STSML. “The goal was to create and develop an ongoing music movement to talk about mental health just like we talk about physical health. Music not only helps us get through tough times, it also can be a voice for changing how we view and talk about things.” The organizations supported by STSML are Crisis Text Line, Hope For The Day, The Trevor Project, and To Write Love In Her Arms.

“Music not only helps us get through tough times, it also can be a voice for changing how we view and talk about things.” — Louis Posen

It didn’t take long until a follow-up to the first compilation arrived, with Volume 2 of STSML coming out in 2019. With a new set of acts participating in the second release, it becomes apparent how huge of an impact artists can make in forwarding the mental health advocacy through a platform as vast and diverse as music. From established and veteran acts like Silverstein, Mayday Parade, and The Red Jumpsuit Apparatus, to Hopeless Records’ very own With Confidence, Doll Skin, and Trash Boat, the second compilation turned out to be another success, and Sub City is furthering the movement by empowering more initiatives.

“Last year we connected our annual Sub City grant with the Songs That Saved My Life movement to focus on mental health initiatives,” Posen shares. “There are no shortages of great ideas and people in need. There is just a shortage of funding. Our goal is to help with the funding shortage and to make even a bigger impact on this huge issue. We’re so excited about our last year’s winner, [the] ‘I’m Not OK’ app. We’ll be launching their updated version of the app this month with help from our funding and we look forward to all the great ideas submitted this year.”

A Way for Artists to Engage in the Mental Health Conversation

With Confidence’s Jayden Seeley says it is very important to the band that they participate in efforts to raise on Mental Health Awarenes. “I think anyone with a platform like ours should be engaging in the conversation, and keeping the dialogue going. I think we’ve all seen some great progress on Mental Awareness and need to keep it moving,” says the frontman. The band covered Train’s “Drops of Jupiter” for the second volume, which for Seeley had a deep, very important meaning. “According to Train’s frontman Pat Monahan, the song is actually about him dealing with his mother’s death after her battle with cancer. The imagery in the song visualises her flying through the atmosphere and coming back to tell him to make the most of his life. I think that’s a really beautiful way to deal with grief, and an important thing to remember,” Seeley shares.

“We feel it’s important to speak about mental health so that maybe someone out there who is struggling can relate, and they won’t feel so alone in their mind.” — Meghan Herring, Doll Skin

“We feel it’s important to speak about mental health so that maybe someone out there who is struggling can relate, and they won’t feel so alone in their mind,” offers Doll Skin drummer Meghan Herring, who opens up about having struggled herself and how their cover of Florence + The Machine’s “Shake It Out” amplifies an incredible message of “creating light for yourself to survive.” “There are still struggles to this day, but it is all about how you handle it,” adds Herring. “By speaking of our past experiences in songs or interviews, we are reaching those who may possibly be going through something similar.”

For Trash Boat vocalist Tobi Duncan, we live in an age where the understanding of mental health “is still in its infancy.” “We have to do our best to speak openly and honestly about whatever we can and participate in pragmatic moves towards people improving their mental state,” he says. “Music is a great way to not only escape but to indulge in objectively positive things and come together in mass support.” Trash Boat’s contribution to the compilation is a scathing cover of Linkin Park’s “Given Up”, with Duncan remembering a particular radio interview given by the late Chester Bennington. “He spoke so frankly about the issues he had with his mental health and the person in his head that wouldn’t allow him to live a day without a negative outlook on himself and his life.”

The movement continues to find its way forward and help more people, having recently been joined by Talinda Bennington as the spokesperson of this year’s $10,000 Sub City Songs That Saved My Life Grant, as announced during the 320 Festival which she had co-founded. Talinda has become a staunch mental health advocate herself, following the passing of Chester Bennington in 2017, and has since been an important and encouraging voice in the advocacy.

“I’m motivated by the stories from people who tell me that what I’m doing has helped them. It’s great to know that the more we talk about our mental health, the healthier we become,” Talinda tells PULP, just as she and her partners wrapped up the recently concluded 320 Festival—an online event created to bring awareness to the importance of mental health, to provide resources to the community, and to normalize the conversation surrounding all mental health pursuits and initiatives.

“The 320 Festival had momentous preparations from the Kevin Lyman Group, the USC MUIN students, and myself. We were able to ask speakers and performers through our existing relationships across the industry,” Talinda reveals, sharing that her favorite talk from the massive online event was the panel discussion on Criminalizing Mental Health, and her favorite performers were Frank Zummo, Julien-K, and Chris Martin. Hopeless Records was also among the many partners involved with the festival.

“You are loved, you matter, and you are not alone. Reach out, offer support and connect to one another.” — Talinda Bennington

With Talinda Bennington as the spokesperson for the new Sub City grant, she and Hopeless Records are encouraging more innovative efforts to provide support and to keep the mental health conversation going through STSML. “In addition to letting people know about resources like Crisis Text Line, the goal is to break down the stigma in talking about mental health. I think the project has made a dent with these goals but we have a long way to go,” Posen says with honesty, aware of the importance that they continue the movement.

At a time when much of the world is shadowed by the COVID-19 pandemic, adversely affecting the mental health of countless people all over the globe, there is indeed urgency in intensifying efforts to bring mental health into focus. “You are loved, you matter, and you are not alone,” Talinda reminds everyone in a message to people who might be struggling at this very uncertain time. “Reach out, offer support and connect to one another.”

And through tough times like what we’re experiencing at present, we can count on initiatives like STSML to keep putting in the work in order to reach more people. “Working on a project like Songs That Saved My Life is very rewarding,” Posen reflects, despite admitting that it’s complicated and difficult to put together such a compilation and to work with so many different parties on one project. “It makes it so worth it when you know how many people you will reach with such an important message.”

“I also think there is an emotional part of working on such a project as you inevitably start thinking about and discussing tough times you went through and what songs saved your life.” PULP

For more information on Songs That Saved My Life, visit https://www.songsthatsavedmylife.com.

If you are struggling through these times and you’re in need of someone to talk to, please reach out to Hopeline PH through the following numbers:

Or text 2919 for Globe and TM Subscribers

Special thanks to Hopeless Records Asia