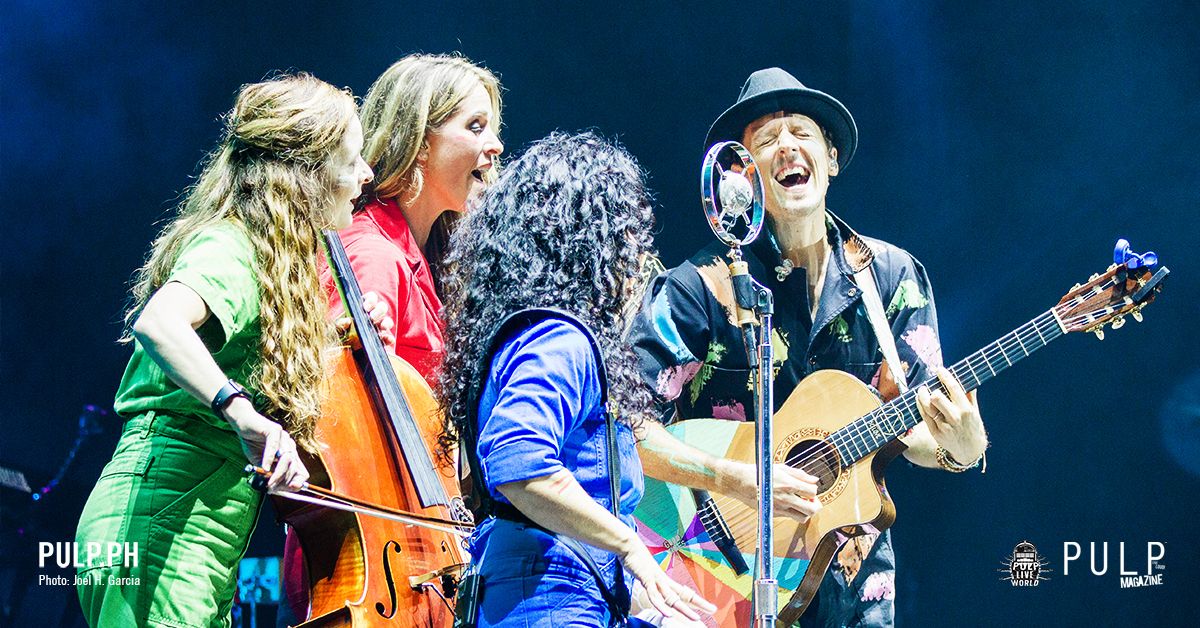 This exclusive interview was first published in PULP Magazine Issue No. 201

“You know, there’s so much in this era that I don’t remember,” Jason Mraz said with a laugh at the sight of a very old magazine from exactly 15 years ago. The magazine he was holding was PULP Magazine Issue No. 45, with a young Jason Mraz on the cover, looking like a rockstar and “pretending to be Angus Young,” as recalled by PULP publisher Vernon Go. “The suit was so huge! It didn’t fit right, and I didn’t play the electric guitar… I was like, ‘What am I doing?’ It was very cool though,” he said, recalling as much as he could.

So much has changed from that point to now. On his sixth visit to the country, though, he still pretty much seems like the same cool dude that graced our cover all those years ago. He greeted everyone with a smile and eagerness that seemed to have grown with every Philippine concert, and he filled the MOA Arena with warmth, positivity, and a bright spectrum of colours. 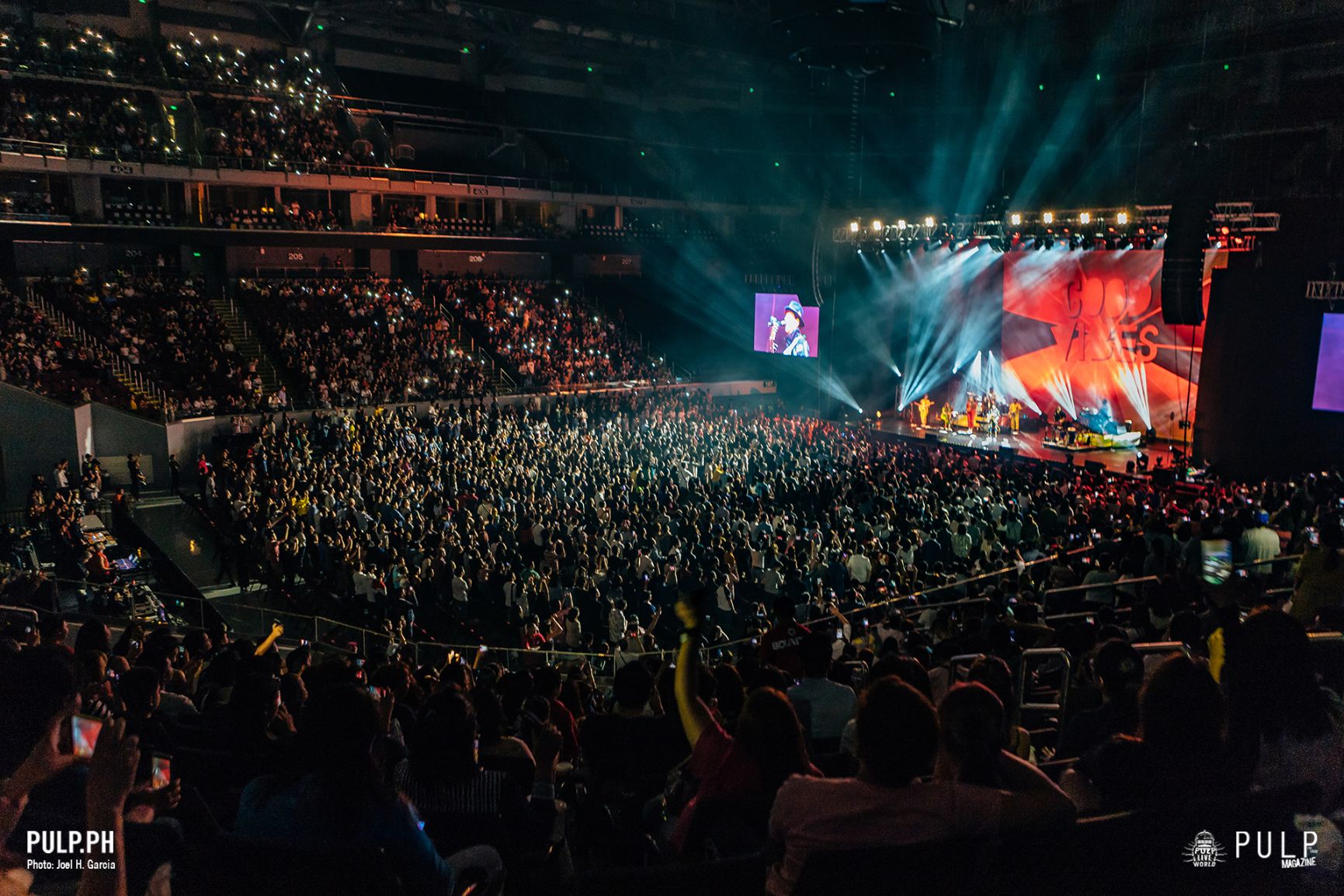 Manila was the kickoff for the Asian leg of his Good Vibes 2019 Tour, and this stretch of the tour couldn’t possibly have had a better opening than the show we enjoyed last May 8th. With Raining Jane in tow (and a guest appearance by our very own Renée Dominique, performing their collaboration, “Could I Love You Any More?”), it was definitely the best show Jason Mraz has played in the country, with performances of new tunes from his latest album, Know. 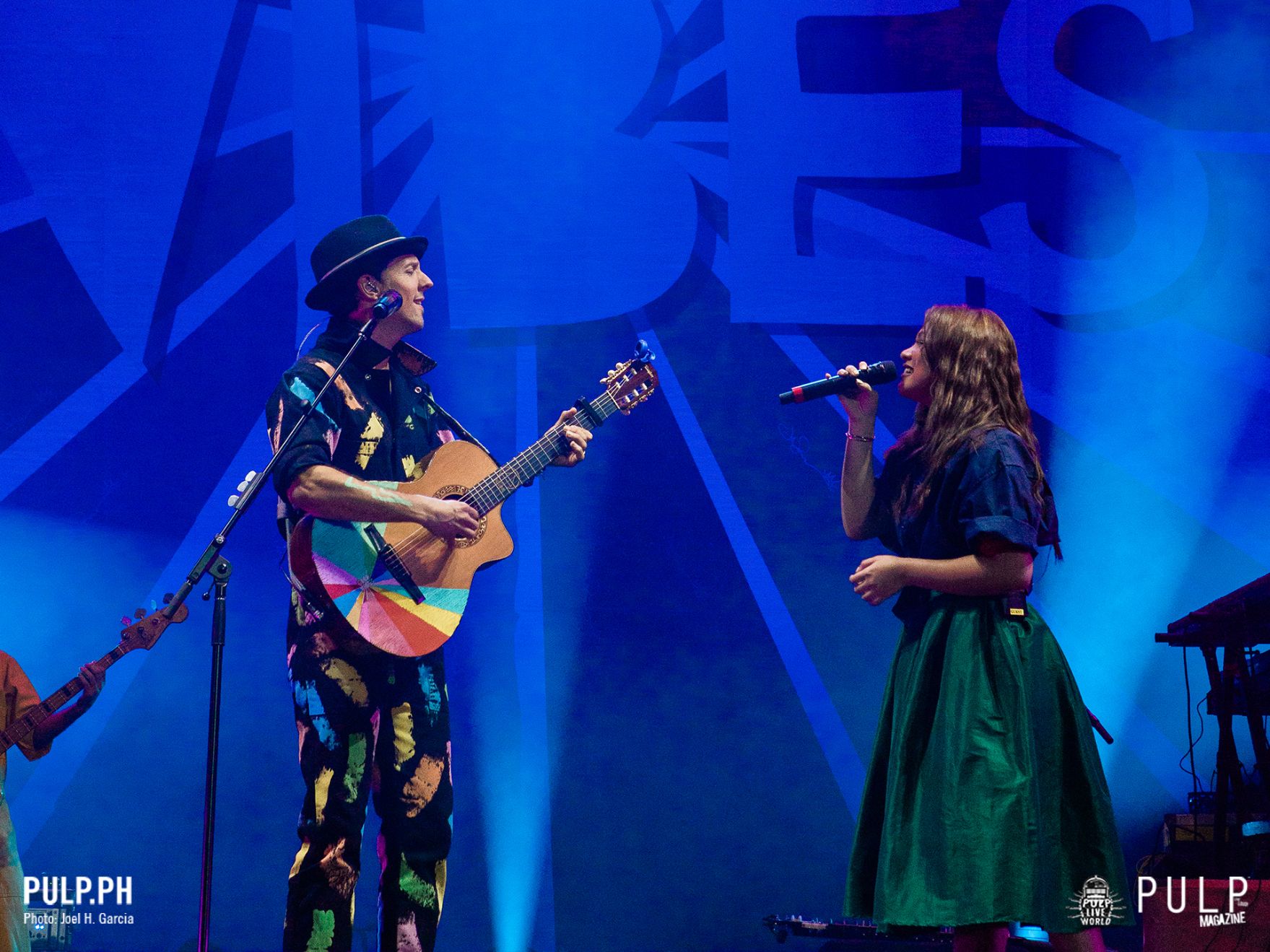 Still as candid, chatty, and conversational as ever, PULP had the chance to speak with the Geek in the Pink ahead of his show. We talk about Know., his experience doing Broadway for the very first time, the importance of using music as a platform, and where all the positivity in his music comes from. 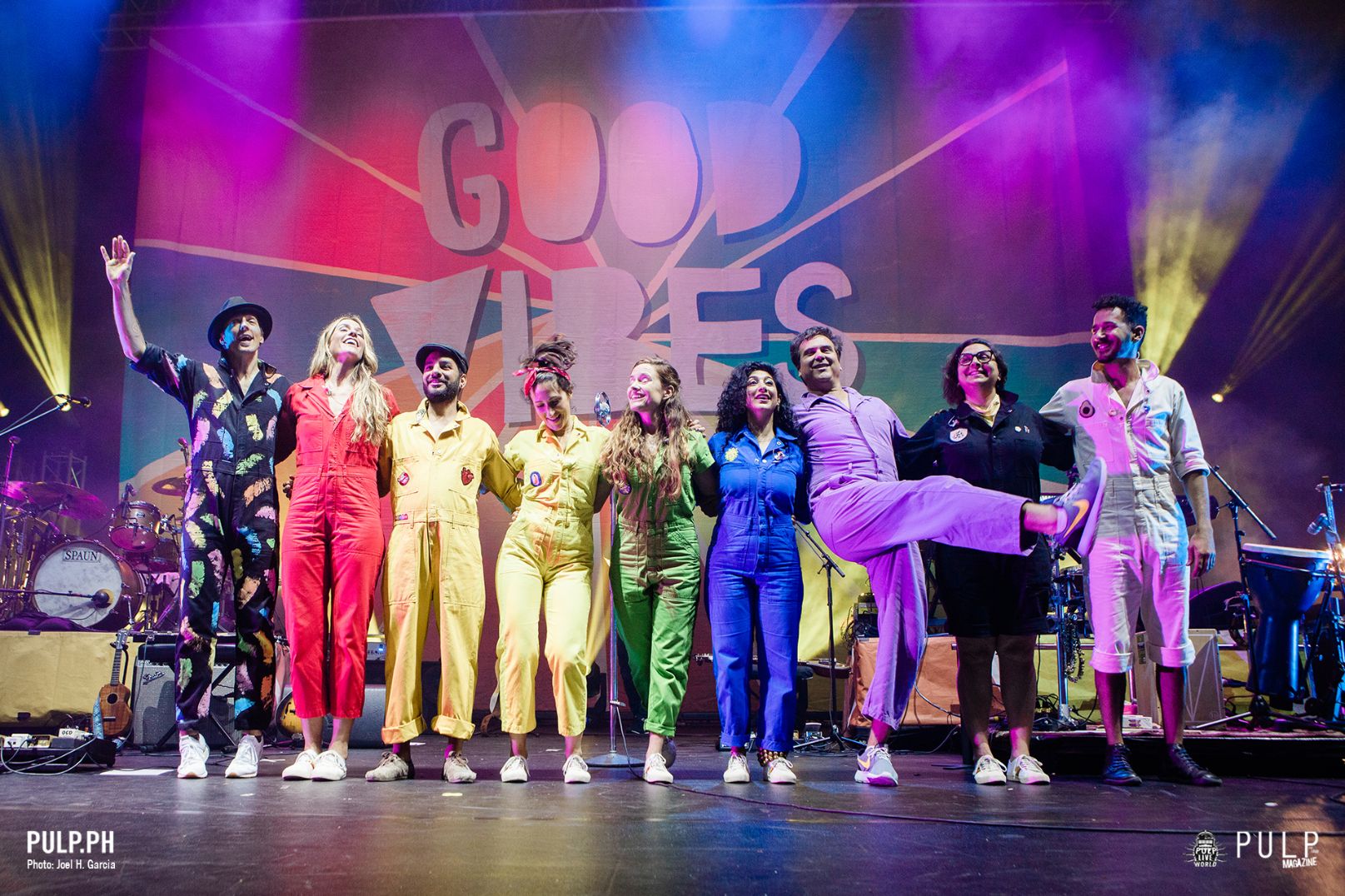 PULP: So, it’s been a long time since you were last in the Philippines, right? Is there anything in particular, or in general, that excites you about travelling around the world again to promote your latest album?

JASON: Well, I feel like a lucky kid, as always. When I was a little kid I just wanted to sing songs, and being able to travel around the world to do that is surreal. So, I still feel very grateful, and almost surprised that I still get to do that, and very grateful that there are listeners all over the world that give me that invitation.

PULP: Okay, so this is the first stop of this leg. How do you usually feel kicking off a tour? Do you ever still feel nervous about all of this especially at the very beginning of a long tour?

JASON: Yes. Yeah, but that’s good. It’s a good thing, an indicator that you are excited—that you have an expectation or something. So your nerves kick in and you wonder how you’re gonna do it. I think it’s a really good indicator. 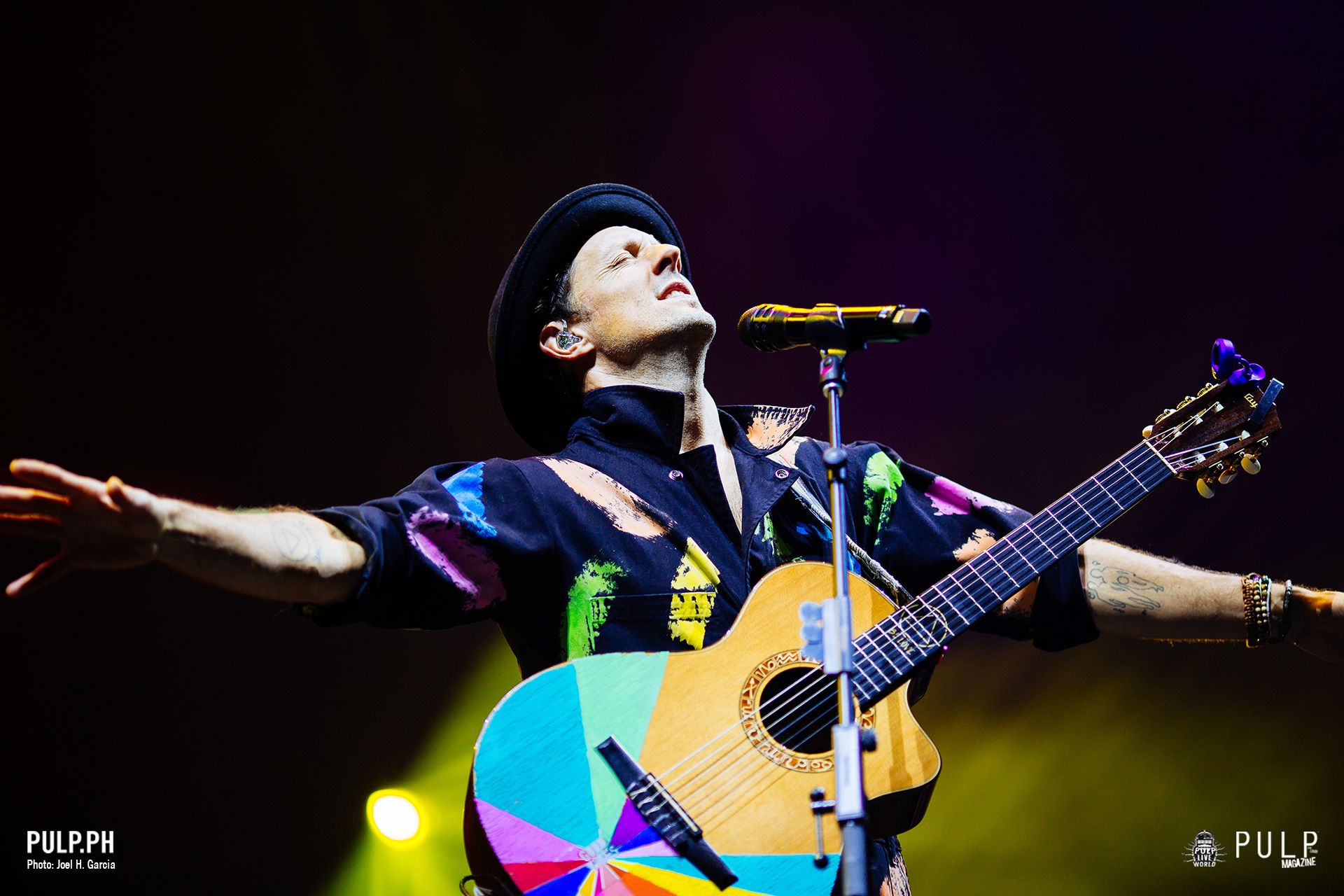 PULP: To talk about some recent stuff that you did—you recently made your Broadway debut. Maybe not very recently, but kinda not long ago. How has your stint in Waitress affected how you make music in any way? Where there highlights from your time in the musical, and is this something you see yourself diving into again into the future?

JASON: I would do it. It’s not something I am pursuing but I wasn’t pursuing it the first time. I got a phone call invitation and it sounded like a lot of fun. So, I prefer to stay spontaneous, keep my schedule open so that opportunities like that might come up. Like, that might be a fun adventure, I can entertain that. After doing the Broadway thing, I was able to go back into the studio with a just a new, almost whimsical attitude where, when you are singing your own songs, you can become just very obsessed with them and you want to make sure they all have a purpose, a value. And even doing Broadway, which was pretty much singing somebody else’s songs, I still very much enjoyed singing the words and embodying the character. I was able to go back into the studio and look at my own work from a different perspective and try to make sure my work would define something for anyone else. So it was a cool experience and it did shift my perspective on what and how I create. 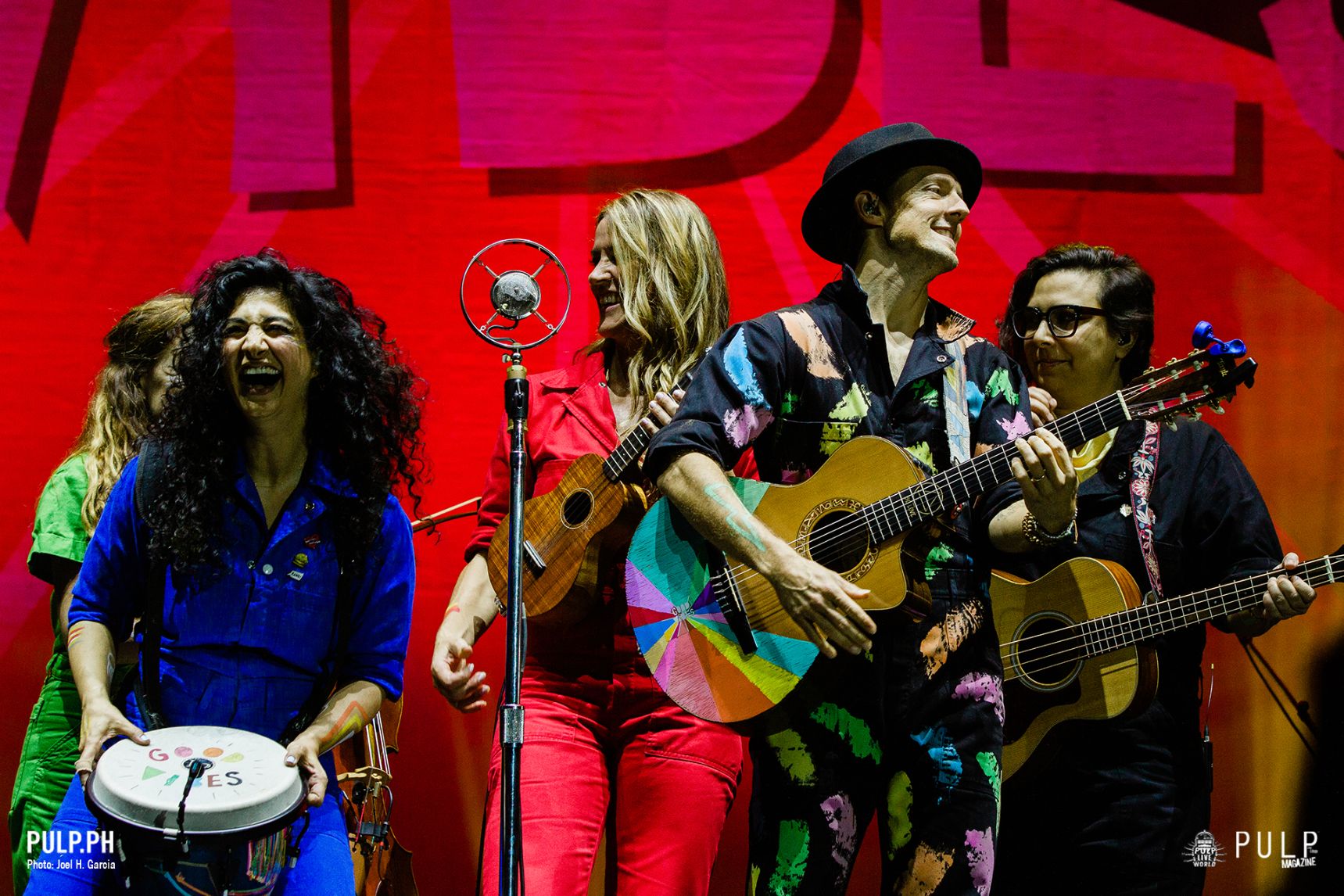 PULP: And it must have been a refreshing experience, too. Well, as an artist, you have many years, many albums behind you at this point. How was it working on Know. and what is something you learned about the creative process going into the making of the album?

JASON: Well, I was making the album before I went to do the Broadway show. And I wasn’t sure where I was going and what the album was going to be. And then, after the Broadway I was ready to go back to the studio with a new perspective so, that was the biggest difference in this record. But there’s a lot of similarities as well, I still have Raining Jane with me. Then, honestly, I feel for the last ten years, almost every record I made is the same. I’m always asking the same questions: Why are we here? What is our purpose? How can we enjoy being here? I think about what kind of songs I can contribute to that cause.


PULP: What was “Have It All” all about? Was there a specific moment or incident or experience that inspired the song?

JASON: “Have It All” began when I was taking a trip to Myanmar back in 2012. I thought, what a beautiful thing it was to be a total stranger. When I was writing record, you know there was a change in leadership. It’s sad and scary at times so I wanted “Have It All” to be a song of hope, a song of promise for the future generation, for people going on to new adventures—you know, just the kind of song that can cheer somebody on.

PULP: And we can imagine how uplifting the song was to anyone needing some encouragement no matter what aspect of life they are talking about. And was that something you experienced a lot from fellow musicians in the industry or any other artist in particular especially when you are starting out?

JASON: Yeah. I was always encouraged to continue and that is very, very helpful because, I think we ourselves are our worst critic and we judge ourselves the most. And the more you can have your friend, peers, colleagues, family validate your work, that what you’re doing is good, that you’re onto something, keep going. Keep going, like this is great! All of that helps. And I think my music is a reflection of that support, you know. Singing back to them the things that I’ve learned, the things that people told me…

PULP: About “More Than Friends,” a song with Megan Trainor—what was it like having her in the song, and if there are other artists/bands that you see yourself collaborating with, who would that be?

JASON: I don’t have a very long list but I love the icon, Stevie Wonder. McCartney. James Taylor… all of these icons, they’re all still out there playing music so. So it would be nice to cross paths with them someday. Working with Megan Trainor in the studio was a blast. She’s a new artist, but already well known and still on the rise. Super talented, I was really blessed. Even before we wrote this song, we knew that there could be something special between us.

PULP: Where does your positivity come from? How do you keep these good vibes overflowing in your music?

JASON: I’m gonna say it’s from a respect for nature, or perhaps from spending enough time with nature. Living and trying to breathe and use my brain more in our space… Humanity does not manage humanity very well. We compete, you know, we cheat each other. We compete and it’s a very sad place and many people are locked out, homeless, or don’t have the same access to resources and it’s vey sad. So, when we connect with nature, when we go back out, at least in my experience… When I spend time to plant a tree, or when I am working my garden, I see the real face that I am more connected to—that face rather than the face of human competition and human consumption.

PULP: In 2019, do you think it’s easier or more difficult to use music as a platform for advocacies?

JASON: It should be easier because music is such a beautiful platform, and people are always advocating for something. Man, when it is done right, when you can have a message that says an idea—you know, a radical idea—you’d think it would be easy, but people don’t respond all the time.

PULP: With a musical journey as long as yours, what would be the single best piece of advice you could give to any song writer or musician?

JASON: Play a lot and be yourself. Nobody can do what you do. And the more original you are the better. Might as well be yourself and enjoy your ride rather than trying to be somebody else.

PULP: 15 years ago now, you were on the cover of PULP Magazine. That was 2004—what does that time in your life or your career remind you of?

JASON: You know, there’s so much in this era that I don’t remember. I was feeling like such a grown up man. And most of my brain was always thinking about what’s next, what’s next, what’s next. But I did keep a journal so I could go back in time and look through, like, my 2004 journal and see what I was thinking, what I was doing. Most of the time I was just exhausted, travelling country to country to country… Because of that I take little breaks in between albums and dive into Earth projects because that fills me as a creator.

Salamat to the beautiful people of the Phillipines 🇵🇭 !
Thank you for always welcoming us with so much love! #manila #goodvibestour @jason_mraz pic.twitter.com/vqIbGZhE0E

PULP: If there’s one word to describe the Philippines and all the experiences that you had here, what word would that be?

JASON: Kapamilya. ‘cause no matter where I go in the world, if I meet a Filipino, they’re like, “Come to the Philippines.” It feels like home, yeah, everywhere.

PULP: Any message for the Filipino fans?

JASON: What keeps me coming back are the listeners, that there are listeners. I guess there are listeners all over the world who are from the Philippines and that’s really a great feeling, to be so far away and still connected to fans. So, I’m just very grateful. PULP

It’s been a little over one month since #JasonMrazinManila—a night which reminded fans that “the remedy is the experience” indeed!Watch the full aftermovie to relive the wonderful musical experience.