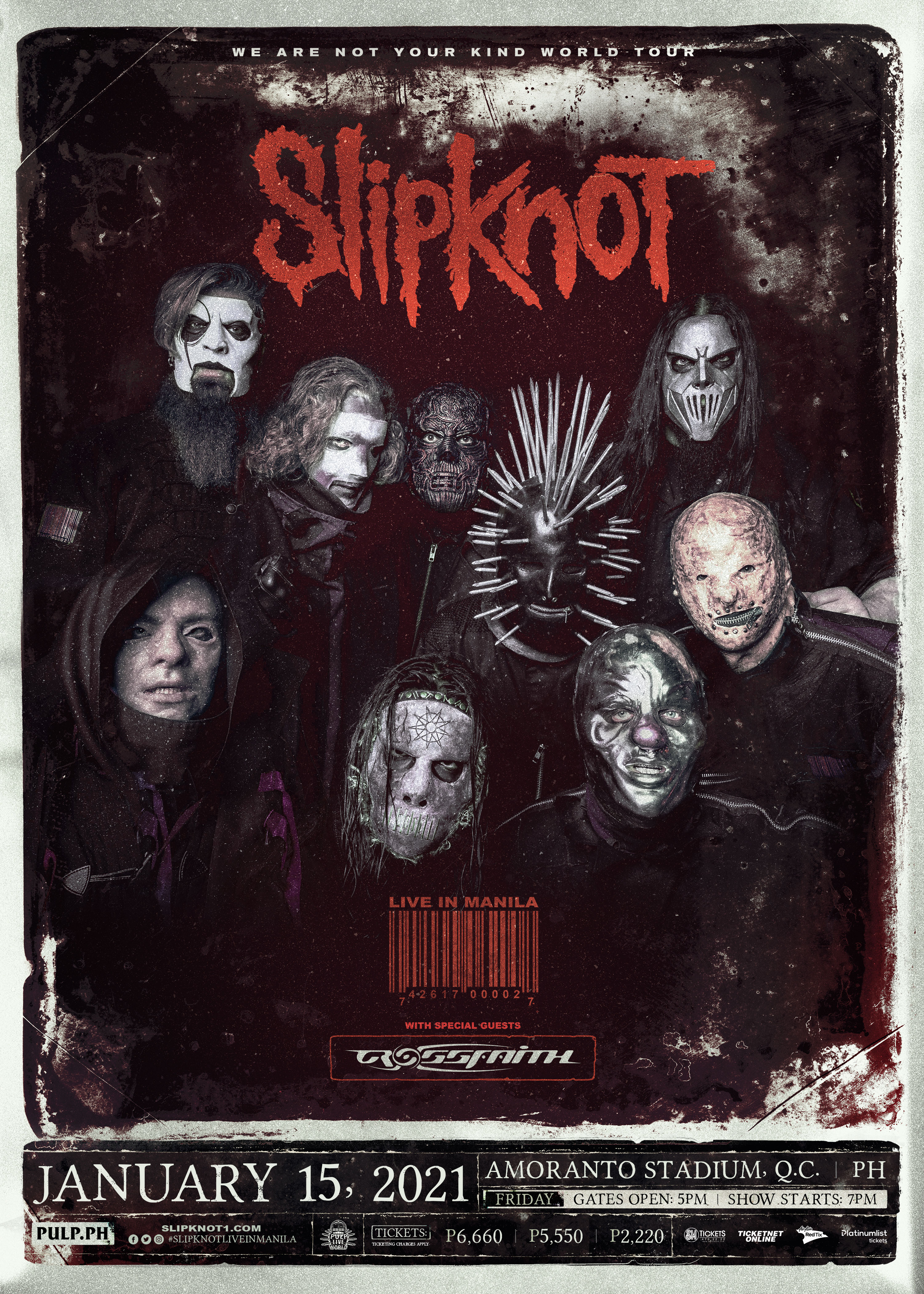 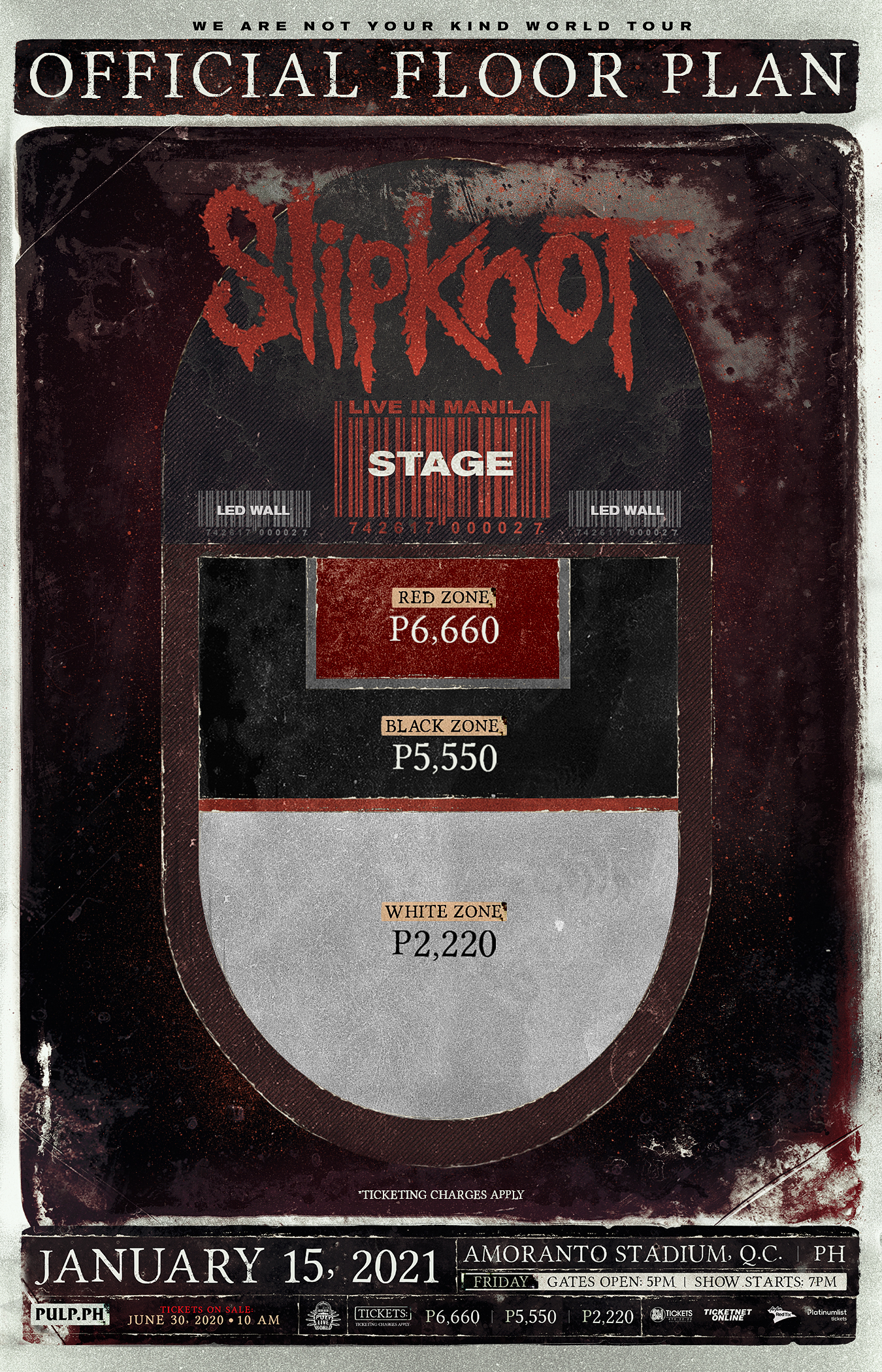 One of the Philippines’ most awaited Metal shows is about to happen as the arrival of today’s most renowned masked entity is imminent. PULP Live World is excited to announce ​SLIPKNOT LIVE IN MANILA​, happening on a new date—​January 15, 2021​ at the ​Amoranto Stadium, Quezon City​.

The multi-platinum Grammy-winning act continues to send shockwaves through the global Metal community, having released their widely anticipated sixth LP,​ We Are Not Your Kind. Released in August 2019 and highlighted by tracks like “The Birth of the Cruel”, “Solway Firth”, and the lead single “Unsainted”, Slipknot’s latest record has unsurprisingly left much of the music world in awe.

“With their latest studio album, Slipknot have released one of the strongest albums in their career,” remarks ​Consequence of Sound, with ​The Independent declaring, “The sheer ambition of ​We Are Not Your Kind is just as staggering as their seminal record ​Iowa – the dynamic might be even better.” Meanwhile, Billboard attests, “Iowa’s greatest musical export has only improved on its genre-busting sound.” The UK’s NME puts it simply: “The ‘Knot’s sixth album is an astonishing record.”

Slipknot emerged towards the end of the 20th Century from the US midwestern town of Des Moines, Iowa and quickly established themselves as the most enigmatic, provocative, and aggressive collective in contemporary music. 1999’s eponymous debut album is widely regarded as a modern-day classic and was honored by ​Metal Hammer as the “Best Debut of the Last 25 Years.” The release quickly racked up double RIAA platinum certifications in the US, with many of the band’s subsequent releases achieving platinum status around the globe.

With the arrival of ​We Are Not Your Kind came more feats to Slipknot’s name. It marked the band’s third consecutive #1 Album on the Billboard 200. Meanwhile, all music videos off the album, directed by M. Shawn Crahan, have each trended worldwide on YouTube. “Unsainted” was at #1 worldwide for a full 24 hours. Slipknot have also amassed over 52 million views in only two months. The nine-piece act also shook the world with the live debuts of “Unsainted” and their 2018 single “All Out Life” on​ Jimmy Kimmel Live!, both of which have become the show’s most viewed music performances of 2019 on YouTube.

Fans of the band all over the world, Maggots as they are called, have continued to revere the band’s inscrutable trademark of theatrics that’s written all over a kind of music that has allowed them to change the face of modern heavy metal as we know it. The same can be said of Filipino fans of Slipknot, who have ceaselessly waited and clamored for this upcoming concert 15 years since the band was supposed to perform in the Philippines for the first time.

Now, over a decade and a half since the ill-fated show, Slipknot are on their way to the Philippines for the first time ever to bring their visually arresting, incendiary, and spectacular live show to the hallowed grounds of Amoranto, a venue that has witnessed the exponential and almost incomprehensible growth of the Filipino metal community through the years. The upcoming Manila show, which has been years and years in the making, will also be a ‘must-see’ event in what is shaping up to be one of the most exciting periods in the Iowa band’s 20-year career.

SLIPKNOT LIVE IN MANILA​, happening on ​January 15 , 2021 at the ​Amoranto Stadium, QuezonCity​, is proudly presented by PULP Live World. Gates open at 5:00PM and the show starts at 7:00PM. Ticket selling resumes on June 30, 2020, 10AM through SM Tickets, TicketNet, AirAsia RedTix, and Platinumlist.net. Tickets are priced at P6,660 (Red Zone), P5,550 (Black Zone), and P2,220 (White Zone). Ticketing charges apply. Tickets purchased prior to the postponement will still be​valid on the rescheduled show date and all details such as ticket prices, tiers, and section, will REMAIN THE SAME for the new date.