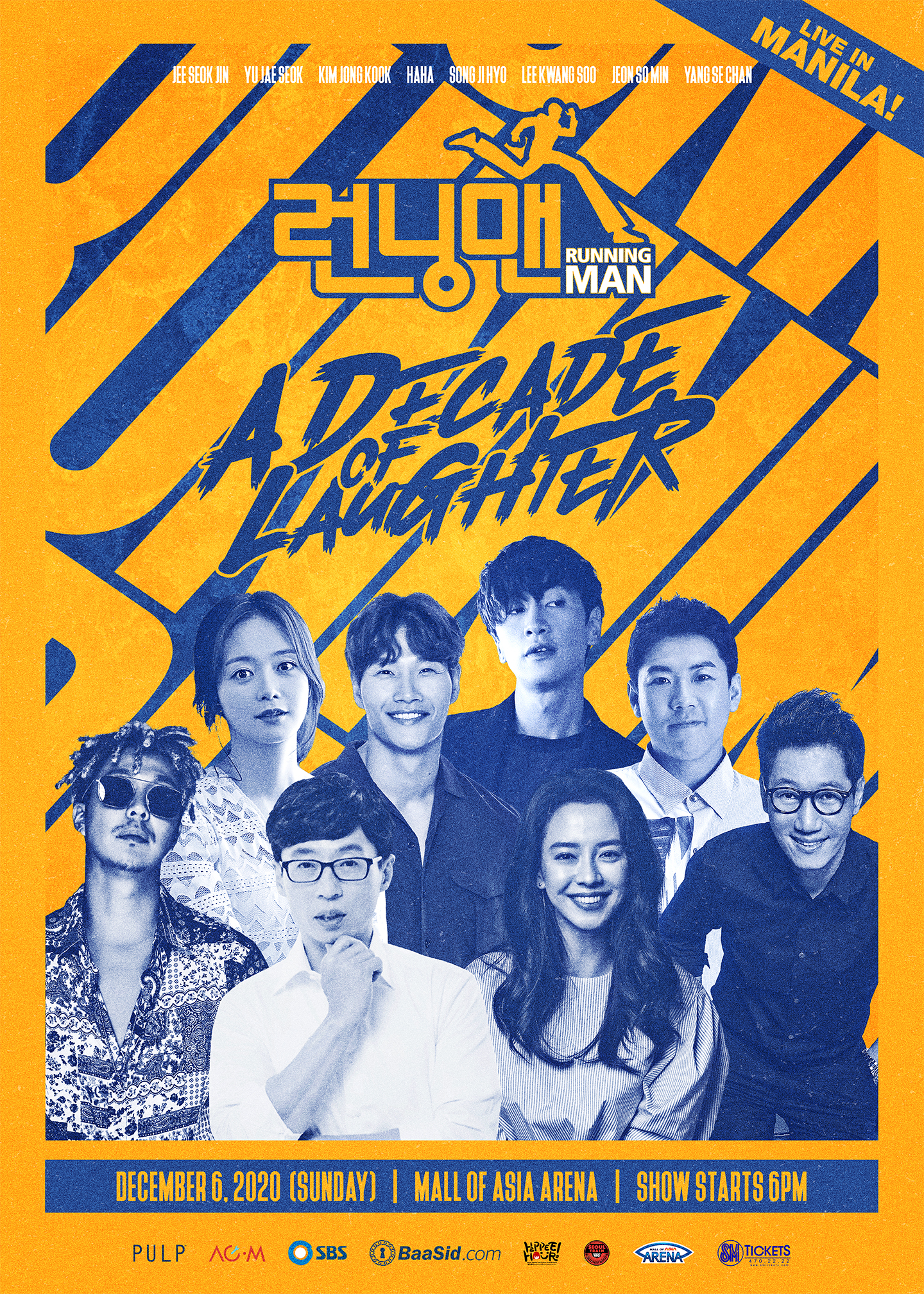 RUNNING MAN ‘A DECADE OF LAUGHTER’ TOUR IN MANILA 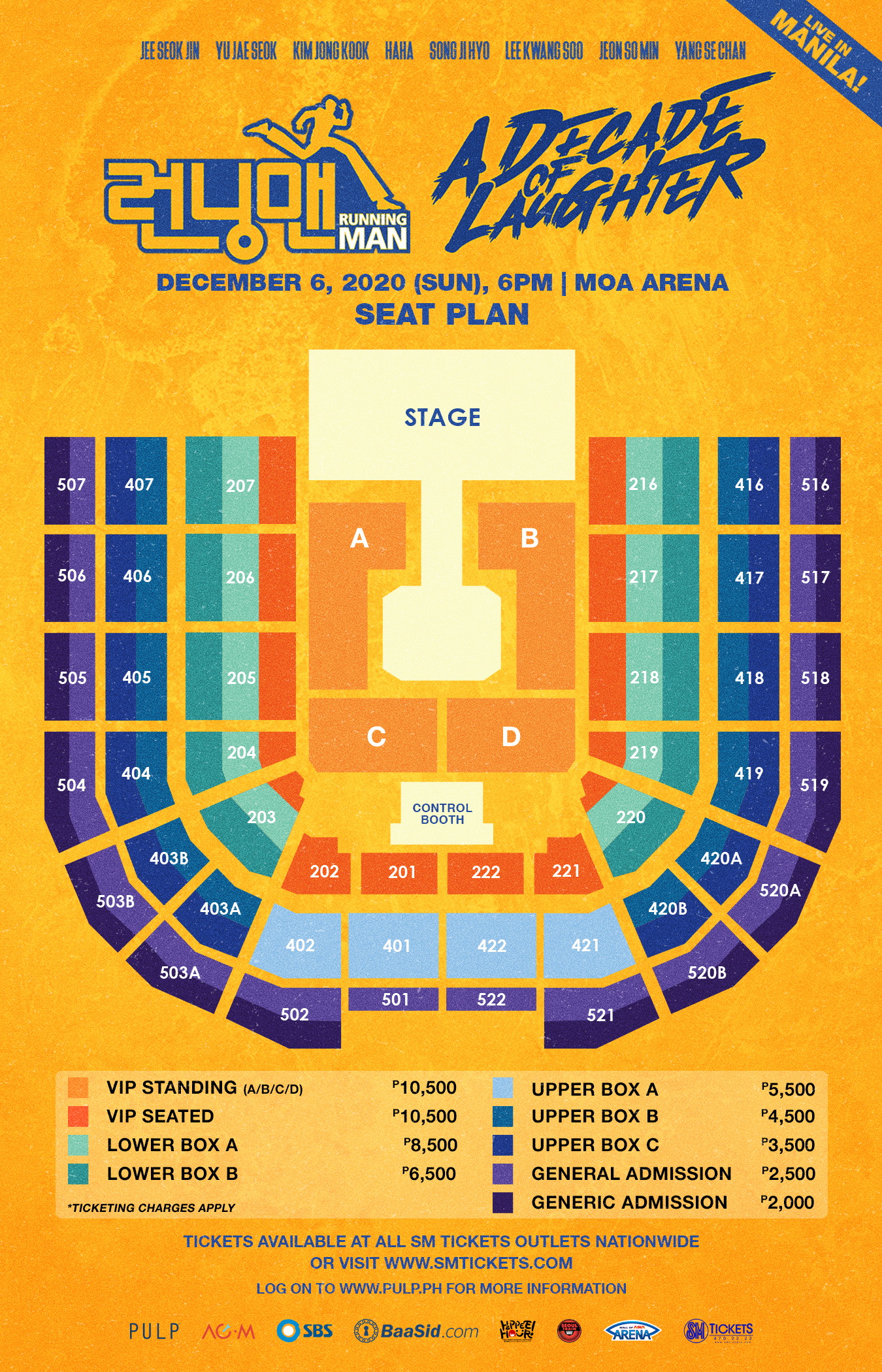 As if we didn’t just wrap up an explosive decade of euphoric KPop, 2020 is shaping up to be an even greater year for all Filipino Hallyu fans. Get ready as one of the highly-requested shows of the decade is about to happen in the Philippines for the first time ever!

Prepare to be filled with thrill and excitement as PULP Live World brings in another world-class act to celebrate its 10th year of producing the best K-events the country has seen. The cast of the longest-running variety show on SBS Channel, Running Man, is heading to the Philippines for a grand fanmeeting – RUNNING MAN ‘A DECADE OF LAUGHTER’ TOUR IN MANILA will take place on December 6, 2020 at the Mall of Asia Arena.

Nearly 10 years since its pilot episode on July 2010 on SBS, the Sunday variety show Running Man has successfully conquered South Korean television with its outstanding comedic acts and games that would bring viewers to different spots across Korea and other countries. It started out as an “urban action variety,” a TV genre with physical and mental games that take place in an urban environment. Immediately after, it became famous for its various games which are replicated by fans of the show worldwide. But aside from that, it was really their Name-Tag Ripping Challenge that has become their signature game, having been highly anticipated in each episode and getting viewers on the edge of their seats out of excitement.

Approaching a decade since Running Man first aired on TV, and now with nearly 500 episodes, the show has proven itself timeless through the years. The show’s games previously highlighted Korean Culture and Tourism. However, it has also incorporated global culture and inspiration to their format. With episodes that were inspired by Hollywood films and ones that feature the cast touring across Asia (for fan-meetings and also filming challenges inspired by the country they are in), Running Man can now be considered a global TV phenomenon that encapsulates worldwide cultures and showcasing them in one grand variety show.

More than that, the show has victoriously garnered recognitions from numerous award-giving bodies as 2019 StarHub Favorite Variety Show and Best Entertainment Program at the 51st Baeksang Arts Awards, and Best Teamwork Award at the 12th SBS Entertainment Awards to name a few—all made possible by the efforts of each staff behind it and as well as the members of the cast.

Now, to celebrate a decade of bringing happiness and laughter to fans through their TV sets, Running Man will be coming to Manila to finally meet their Filipino Fans. This is undoubtedly a show that every Hallyu fan should look forward to. Don’t miss this chance to meet the Running Man cast and run to Mall of Asia Arena on December 6, 2020, 6PM for RUNNING MAN ‘A DECADE OF LAUGHTER’ TOUR IN MANILA. This show is proudly brought to you by PULP Live World.

Tickets will be on sale soon at SM Tickets outlets nationwide and online via www.smtickets.com. Further ticketing and show details will be announced soon. Please stay tuned on our social media accounts, PULP Live World on Facebook, Twitter, and Instagram and visit our website www.pulp.ph