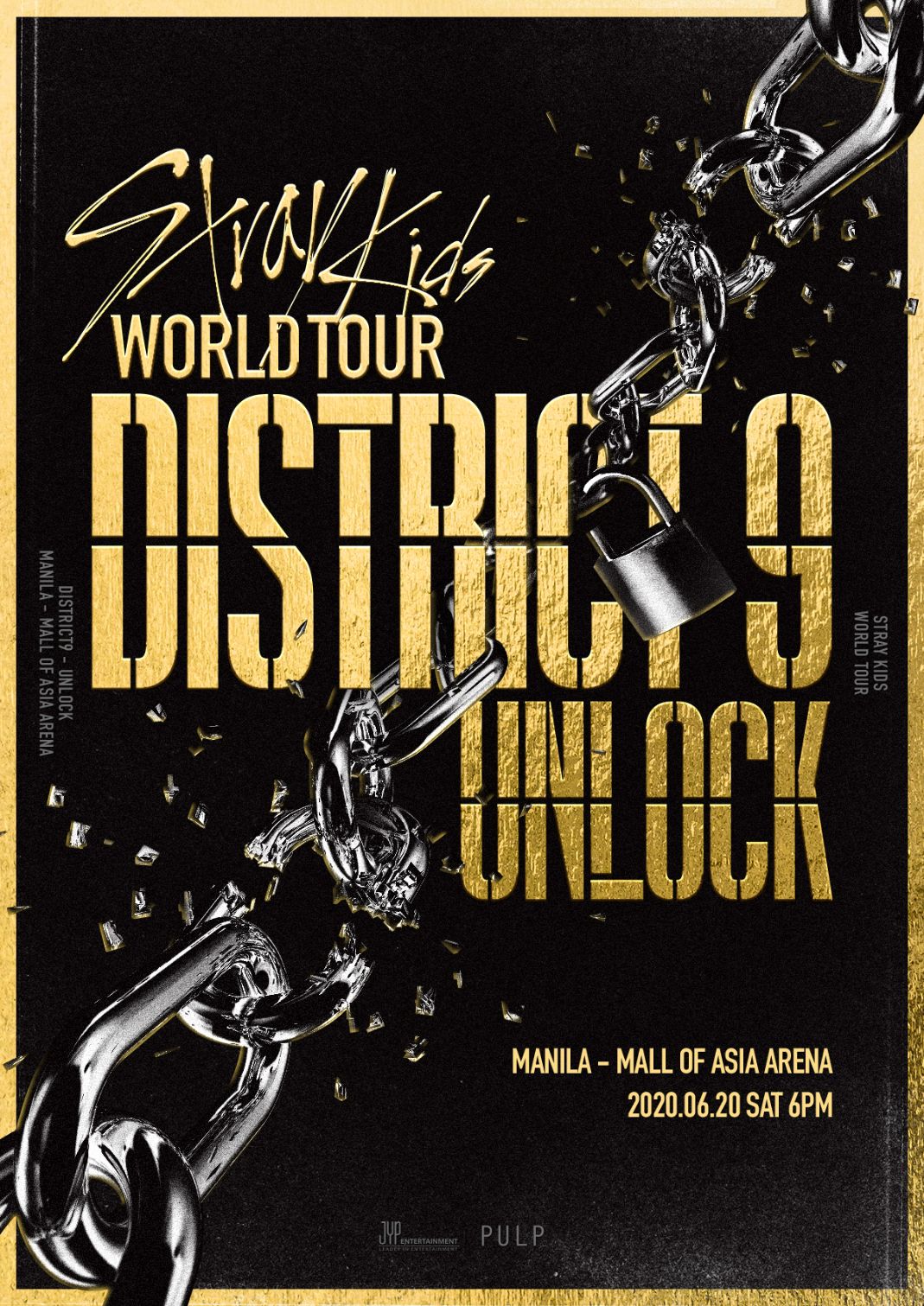 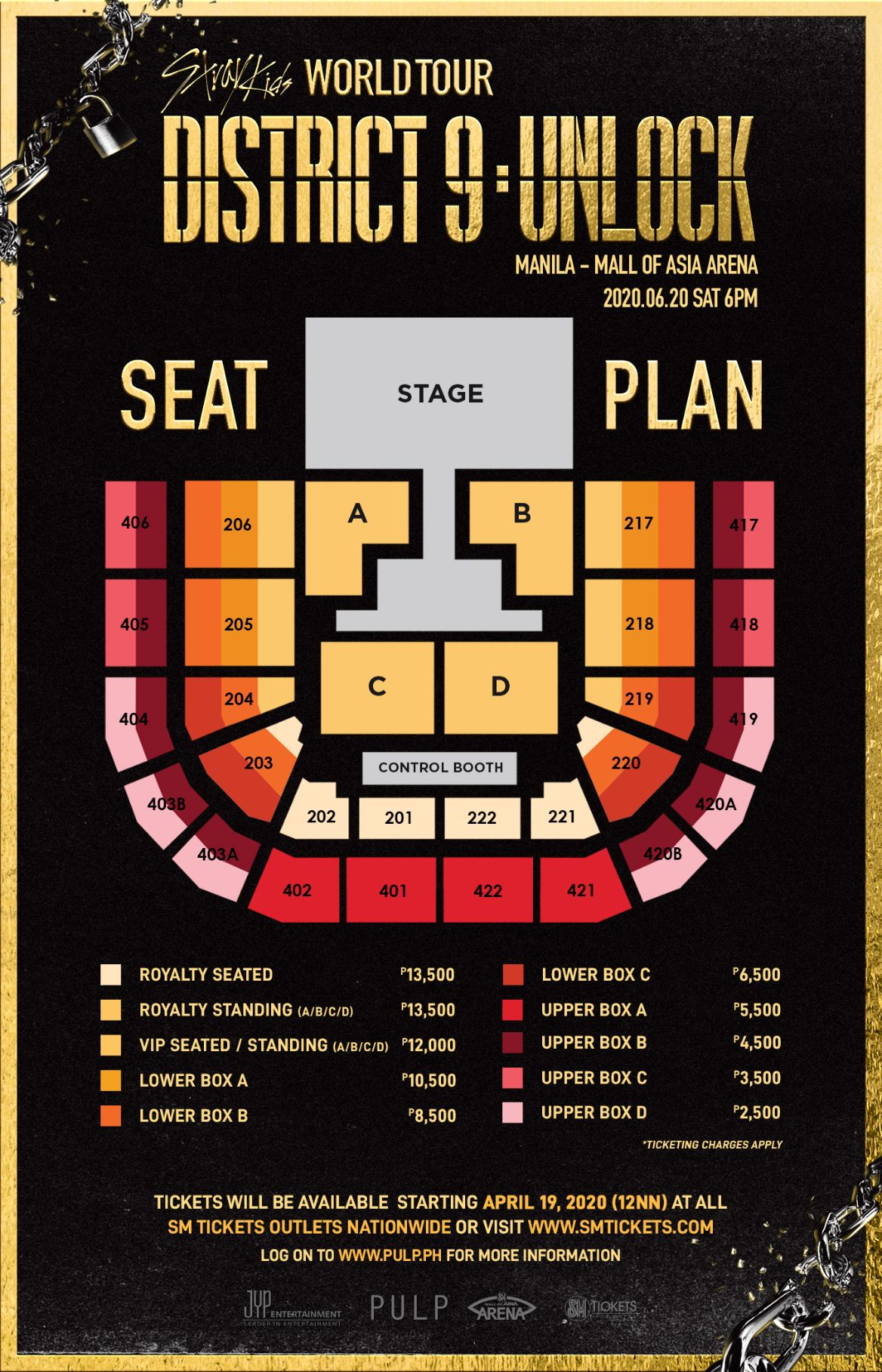 Staying true to their promise of return in the Philippines a year after the startling success of their first-ever solo concert tour in the country, STRAY KIDS is once again embarking to Manila to give the Filipino STAYs a sight of their biggest tour to date.

PULP Live World is pleased to unravel a brand new show that will surely stun each STAYs (Stray Kids fan club name) as it affirms the fearless growth of Stray Kids’ prowess and career – STRAY KIDS World Tour ‘District 9: Unlock’ in Manila happens on June 20, 2020 at the Mall of Asia Arena.

In just a span of over 2 years since their debut, STRAY KIDS have now started a massive trip covering a huge region in South Korea, US, Europe, and Asia with this tour while remaining true to their mission of connecting with thousands of fans through their tracks which conveys personal struggles experienced by a lot of people in this generation. With this, fans can attest that STRAY KIDS is truly deserving of the excellent titles given to them by Korean and International award giving bodies.

STRAY KIDS have now garnered numerous awards under their belt such as the prestigious Best New Artist Award from the 2019 Golden Disc Awards and New Star Award from 2019 Asia Model Awards. Their recently completed chart-topper EP trilogy starting from the EP Clé 1: MIROH, Clé 2: Yellow Wood to the latest Clé: Levanter have also racked up special attention from fans as the single tracks from these three EPs have gained millions of tractions online and massive album sales.

To further reach their international fans, STRAY KIDS have also release two tracks with English versions, Double Knot and Levanter which tackles a powerful message of self-worth and courage. Subsequently, they have also performed these two tracks on renowned TV shows in US such as “Good Day New York” and “Live with Kelly and Ryan”. Aside from that, Double Knot has also gained over 10 million of views on YouTube within a span of one week after its release, proving that STRAY KIDS are always highly anticipated by STAYs around the globe. Fans can expect to see these hits and more live on their upcoming tour together with a refined and more mature image that they are beyond ready to offer.

This 2020 tour marks STRAY KIDS’ remarkable progress as one of the K-Pop boy groups that consistently break boundaries. Fans from their home country, South Korea and fans around the globe have witnessed how they successfully evolved into audacious gents from charming rookies.

With this show, STRAY KIDS will surely welcome each Filipino STAY inside an epic District that showcase their rebellious artistry especially dedicated to all of their fans. You are all invited to open the gates leading to an epic night with STRAY KIDS. Witness them live on June 20, 2020 at the Mall of Asia Arena for STRAY KIDS ‘District 9: Unlock” in Manila. The show promptly starts at 6PM. This show is proudly brought to you by JYP Entertainment and PULP Live World. Make sure to grab your tickets starting April 19, 2020, Sunday, 12NN at SM Tickets outlets nationwide or online via www.smtickets.com. 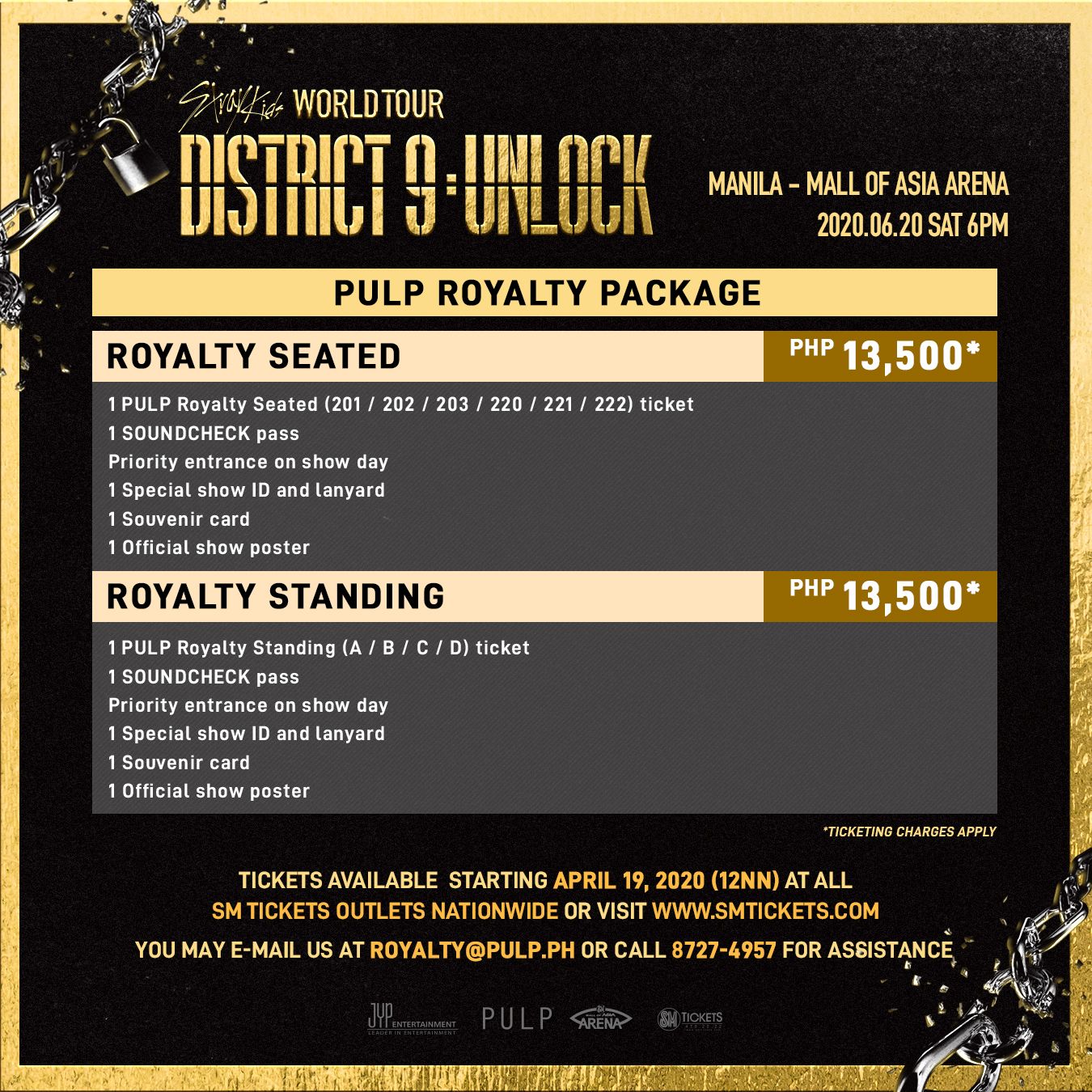