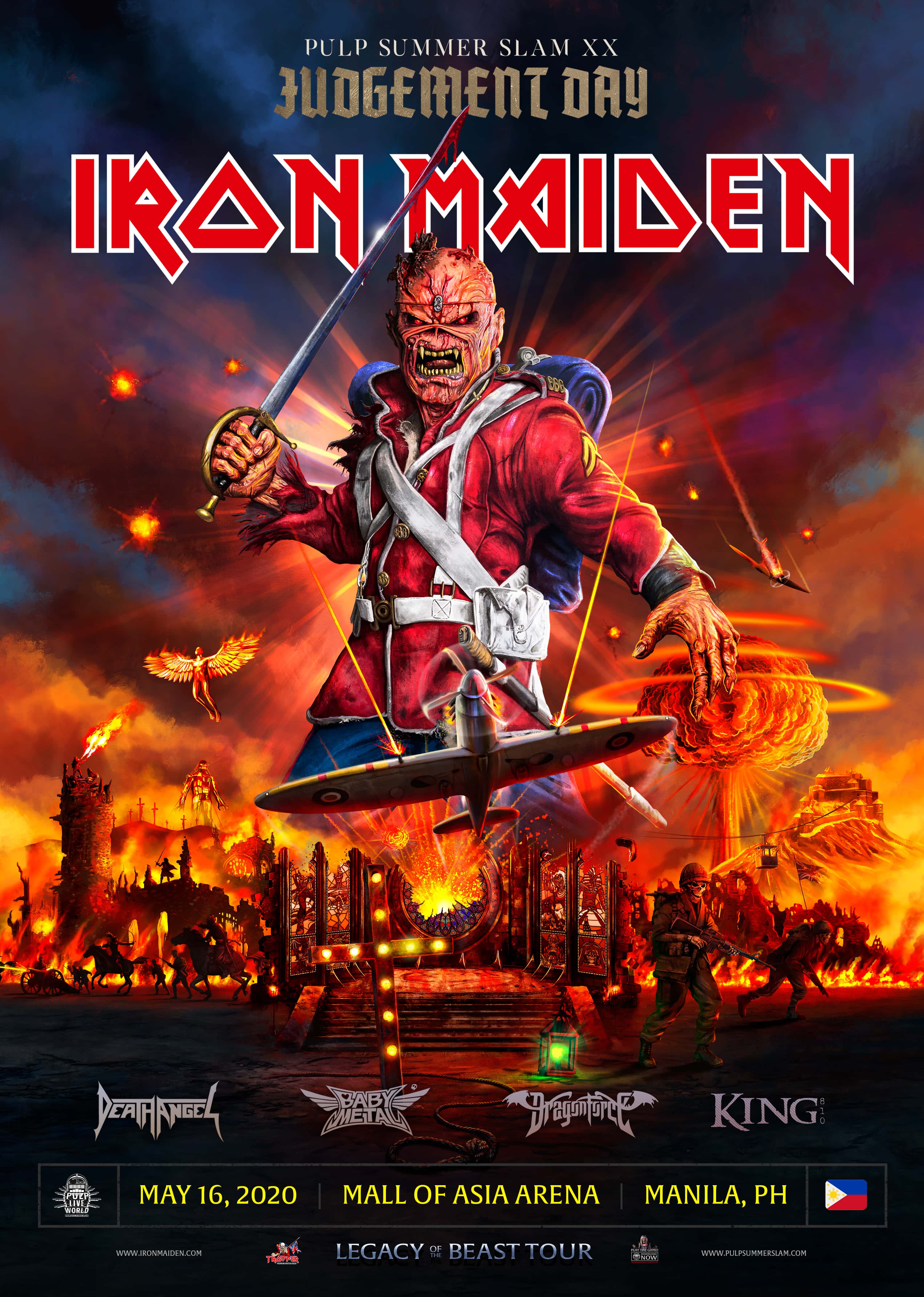 Once again ranking on the worldwide list, PULP SUMMER SLAM has moved up to #225 from its previous rankings of #229 in 2017 and #249 in 2016. Festival 250 is an annual project from Festival Insights, an online B2B publication focused on the international festival industry.

Promoter Vernon Go says that this will likely be the final PULP SUMMER SLAM and has aptly given it an ominous theme: JUDGEMENT DAY. “I believe having IRON MAIDEN headline our 20th year of PULP SUMMER SLAM is not only historic but certainly poetic for Metal fans,” says Go. “It is certainly a beautiful ending to two decades of Metal mayhem in the Philippines, especially since it is their only Southeast Asian stop and the only East Asia tour date outside of Japan.”

“We’re delighted to finally come to The Philippines and present the Legacy Of The Beast Tour to all our fans there! We’re immensely proud of this show and we’ve had great reactions from the many fans who came to see us in Europe, North America, Mexico, and South America,” comments Maiden vocalist Bruce Dickinson. “The production for the PULP SUMMER SLAM Festival is exactly the same as the other shows on this tour so far and is based on our mobile game The Legacy of the Beast which basically takes various incarnations of Eddie into many different Maiden Worlds. This inspired us to put together a stage show to take our fans through different Worlds and experiences set to appropriate songs,” he adds, giving fans a glimpse of what to expect during their headlining performance at the SLAM. Hailed by global rave reviews, the tour’s production and setlist is inspired by Maiden’s free to play mobile game of the same name which is available on iOS and Android platforms at www.ironmaiden.com/play.

“We feel we ended up with a very strong and well balanced set mixing songs we haven’t played in many years like ‘Flight Of Icarus,’ ‘Sign Of The Cross,’ and ‘The Clansman’ with songs we know the fans want to hear like ‘The Trooper,’ ‘2 Minutes To Midnight,’ ‘The Number Of The Beast,’ ‘Fear Of The Dark,’ ‘Run To The Hills,’ ‘Hallowed Be Thy Name’ and others, reflecting the journey through the different themes of the show,” bassist and founding member Steve Harris adds, speaking about how the band came up with the tour’s monstrous setlist. “We’re excited to bring this show to Manila because our fans there have never seen these songs performed live before so we can’t wait to play them.”

Fans have been anticipating the ticket prices for this monumental event that also features four other incredible Metal bands: Death Angel, BABYMETAL, Dragonforce, and KING 810.

See you at the SLAM!