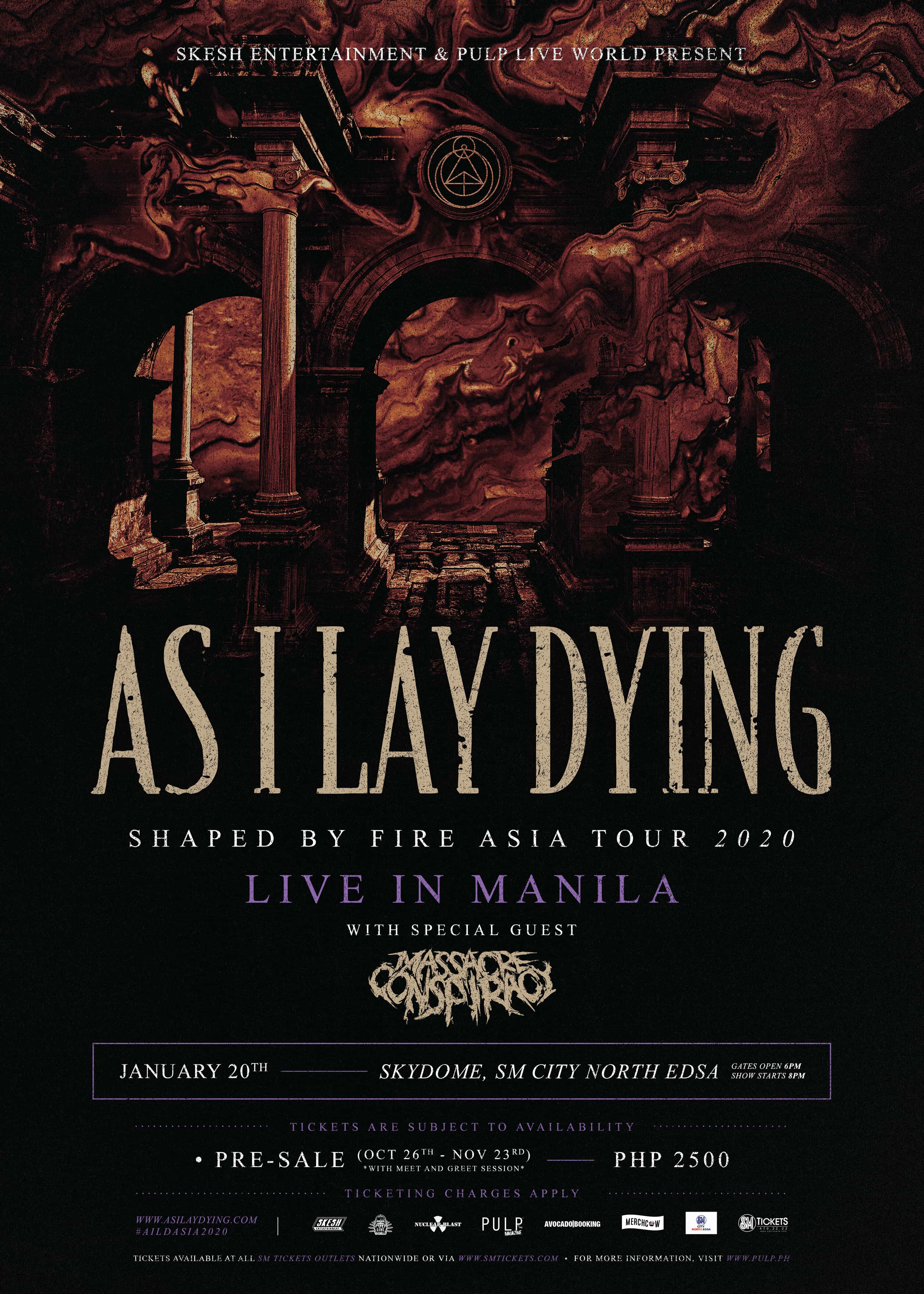 AS I LAY DYING: SHAPED BY FIRE ASIA TOUR LIVE IN MANILA

Now carving a new path as they write the latest chapter for the band, As I Lay Dying are currently setting the world ablaze. PULP Live World and Skesh Entertainment are excited to announce that As I Lay Dying are returning to the Philippines as part of their World Tour, years after the band first scorched Manila.

Hot on the heels of their brand new album Shaped By Fire, the metalcore behemoths are on track to reconnect with their Filipino fans, who last caught the band seven years ago at PULP SUMMER SLAM XIII: ‘Til Death Do Us Part. Finally, their Manila comeback is on the horizon. AS I LAY DYING: SHAPED BY FIRE ASIA TOUR LIVE IN MANILA takes place on January 20, 2020 at the Skydome, SM City North EDSA.

From ashes, the band reignited a fire that now burns brighter than it ever has now that the brotherhood has reassembled, following Tim Lambesis’ release and subsequent reconciliation with bandmates. “With everything that’s happened and all of the time away, there really was no other option than to be the best version of As I Lay Dying we could possibly be,” Tim has said in a statement. “We wanted to make sure we made an album that represented our best selves. Individually and collectively, a similar rebirth happened.”

“We are tremendously grateful to have found positive resolve from the worst moments of our history,” the band comments. “Subsequent years found us on varied paths—all of which slowly led towards resolutions of growth, healing, and reconciliation.”

“As I Lay Dying’s collective purpose is to share a message of hope for everyone through the empowering outlet of music, and we are humbled by the overwhelming support we have received from family, friends, and fans so far.”

Indeed, Shaped By Fire marked a triumphant return for a band that, despite circumstances that set them back for years, has found it in them to forge on, as they’ve been reborn with a new purpose following a long-winding journey of reproach and redemption. Presented by PULP Live World and Skesh Entertainment, AS I LAY DYING: SHAPED BY FIRE ASIA TOUR LIVE IN MANILA happens on January 20, 2020 at the Skydome, SM City North EDSA. Opening this staggering show are Malaysian metallers Massacre Conspiracy. Gates open at 6:00PM and the show starts at 8:00PM.

Tickets will be available at all SM Tickets outlets nationwide and online at www.smtickets.com, and are priced at P2,500. Ticketing charges apply. Pre-sale for tickets runs from October 26, 2019, 10:00AM ‘til November 23, 11:59PM. Tickets purchased during this Pre-sale period will be inclusive of a Meet and Greet Session with As I Lay Dying. Regular ticket-selling will follow from November 24, 2019 onwards.