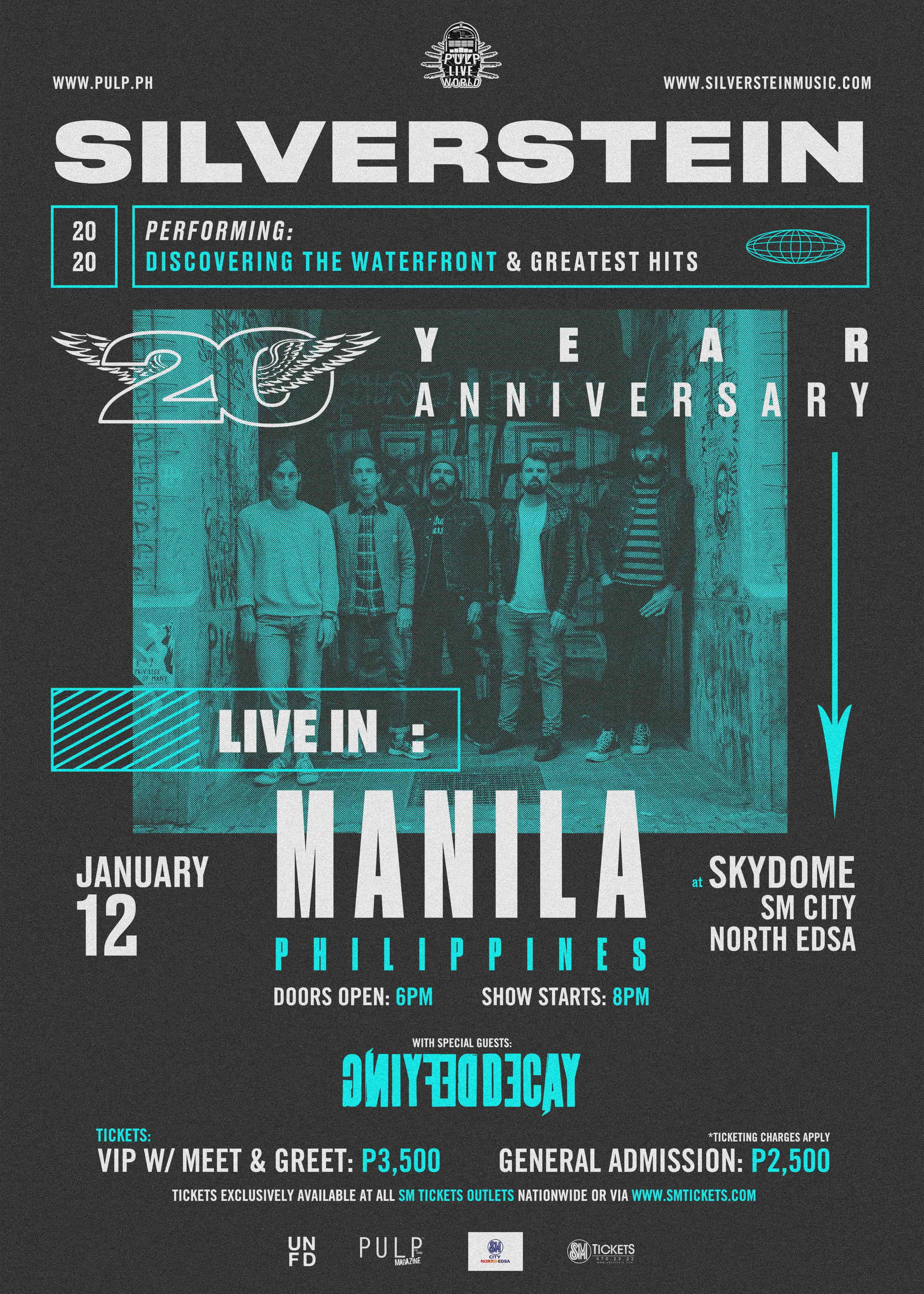 2020 is shaping up to be another massive year in music as PULP Live World continues to mark more momentous milestones. Redefining the Philippine concert experience for two decades now since its inception in 1999, PULP has every intention of lining up the coming year with the loudest shows, the most explosive experiences, and the fondest memories.

PULP kicks off 2020 with an old-school rock and roll show—Canadian emo/post-hardcore mainstays Silverstein are headed our way for their first Manila show in about eight years. SILVERSTEIN 20 YEAR ANNIVERSARY IN MANILA, with special guests DEFYING DECAY, takes place on January 12, 2020, Sunday, at the Skydome, SM City North EDSA.

Shane Told (vocals), Paul Koehler (drums), Josh Bradford (guitar), Billy Hamilton (bass), and Paul Marc Rousseau (guitar) are making their way to Manila with a milestone of their own to share with their Filipino fans. The band is set to play their iconic album Discovering The Waterfront in its entirety along with other hits from their arsenal of anthems throughout their 20-year run as a band.

Forming in Ontario, Canada at the turn of the millennium, Silverstein went on to become stalwarts of the emo/post-hardcore scene, being among the longest-reigning bands to be at the forefront of the genre. With nine studio albums to their name (a 10th release, Redux, being a recent independently-released compilation of re-recorded songs from the band’s first ten years), the upcoming 20 Year celebration is made more meaningful by the many career-defining moments that they’ve had as a band.

From the time Silverstein broke out into the music scene with their debut album When Broken Is Easily Fixed (“Bleeds No More,” “Giving Up,” “Red Light Pledge”) in the year 2003, the Juno-nominated band has proven to be one of the most consistent bands around, not just with how they’ve released an album every two years without fail, but also with the way they’ve outdone themselves album after album.

Now with over a million records sold worldwide, Silverstein fans appreciate the band’s music more with every album release. While later albums like I Am Alive In Everything I Touch(2015) or Dead Reflection(2017) are generally as favored as the more classic Silverstein records, if not even more, one album that will perhaps always be a special one is their second album Discovering The Waterfront (2005). With tracks like “My Heroine,” “Call It Karma,” and “Smile In Your Sleep,” this was an album that brought Silverstein more mainstream success during their early years as a band. To hear it live front to back, in 2019, would be quite the emotional experience as we celebrate 20 years of Silverstein in one very special and nostalgic show.

Warming up the stage for Silverstein as support act are Defying Decay from Bangkok. Touring to promote their latest release Metamorphosis, the Thai alternative metal act are also returning to the Philippines after supporting Motionless in White on their UK tour towards the end of 2019. They are also off to Japan in January to share the stage with Slaughter To Prevail, but not ‘til after their Manila comeback with Silverstein.