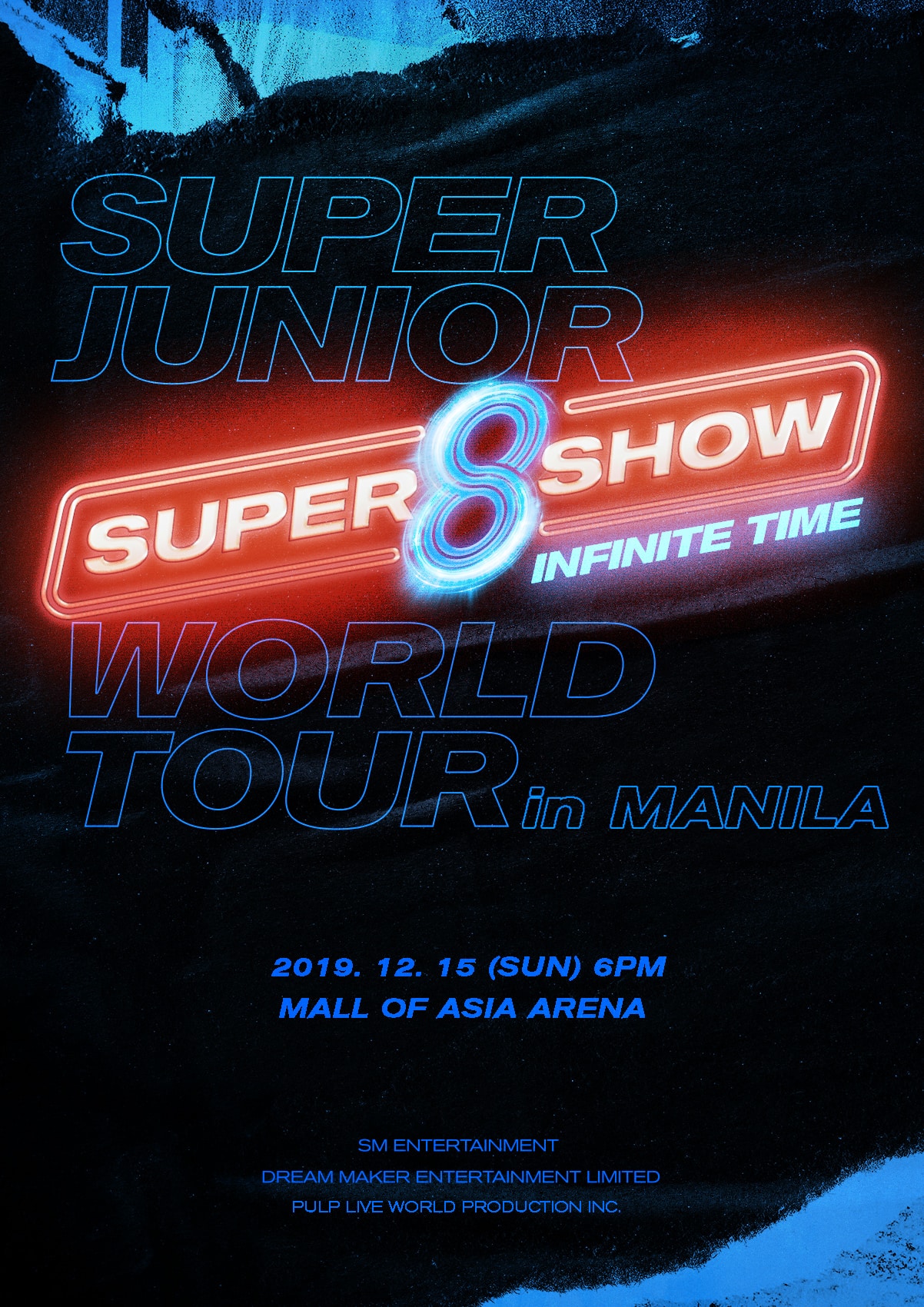 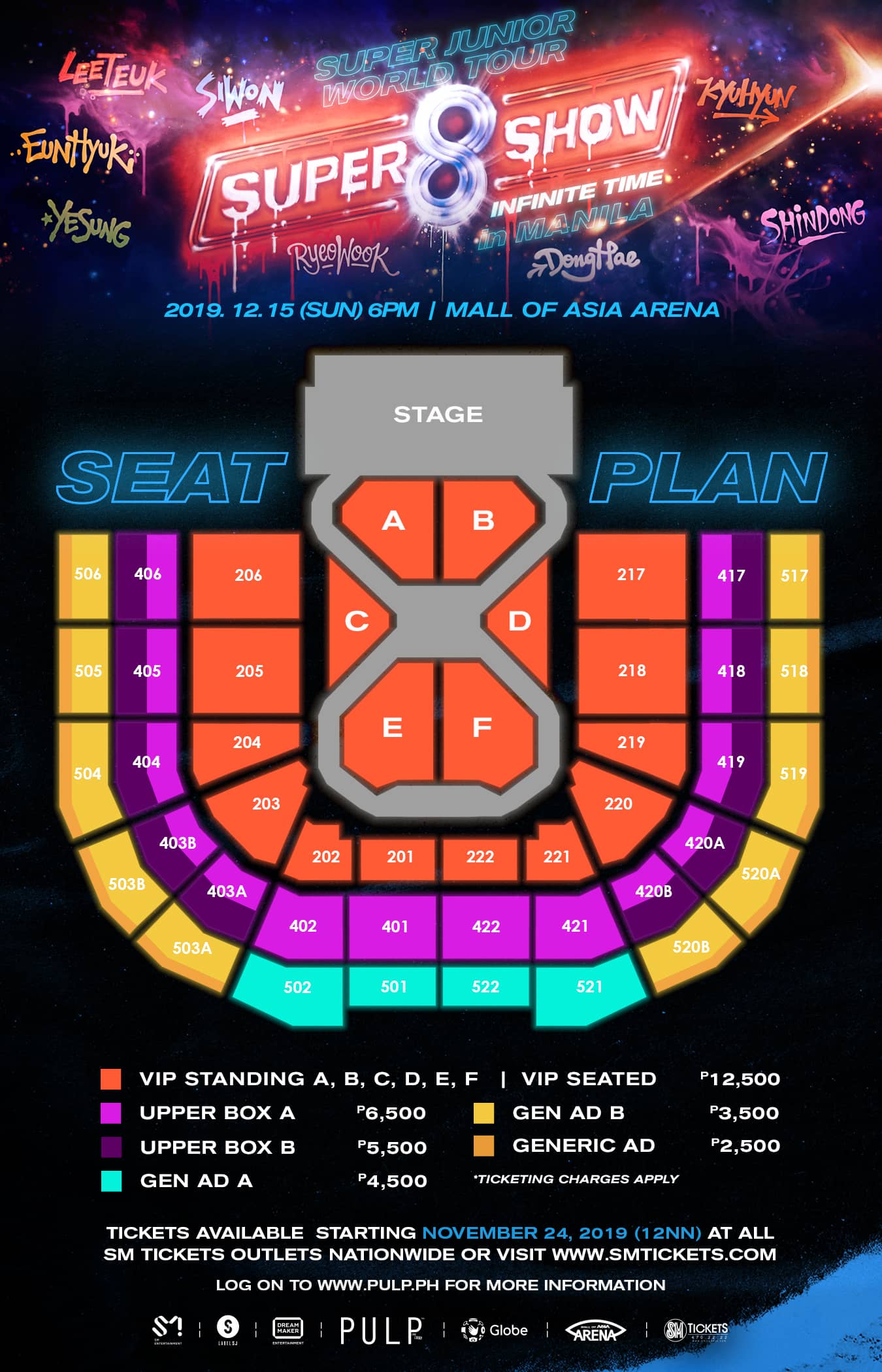 There’s no other “super” way to end the Year of K-Pop in the Philippines than by bringing back the ultimate superstars of the industry for another spectacular stage takeover. Thus, we bring you Super Junior and their return for the highly anticipated Super Show 8!

Showing their veteran skills in impressing crowds with their timeless charisma and eternally astounding performances, Super Junior are making their grand return to the Philippines as PULP Live World proudly presents yet another splendid show from the Super Show Concert series, SUPER JUNIOR WORLD TOUR – SUPER SHOW 8: INFINITE TIME IN MANILA. The show takes place on December 15, 2019 at the Mall of Asia Arena.

Having been in the industry since 2005, the SM Entertainment group has long has long been an established name as as a well-loved and respected act with their doubtless talent and immeasurable impact on the K-Pop scene. Super Junior were among the acts that spurred the breakthrough of the Hallyu wave in the Philippines, remaining to this day as an iconic group with a truly everlasting kind of support from their massive fanbase in the country.

Their popularity also continues to expand worldwide through different feats, with accolades like being the first Asian artist to ever win the International Artist category at the 2015 Teen Choice Award and being the first Asian artist to ever win and be nominated for the Feat Favorita award in Kids’ Choice Awards Mexico for “Lo Siento (Feat. Leslie Grace)”. The song served as the title track of their eighth repackage album, REPLAY. They’ve also recorded a total of 19 music awards at the Golden Disc Awards, 13 at the Mnet Asian Music Awards, and 13 at the Seoul Music Awards – all of which are recognized as some of the top award-giving bodies in South Korea.

Since 2008, Super Junior have been connecting with ELFs through their Super Show concert series. They’ve held the show every year until 2015 with missing members for each year due to military service. After a two-year tour break, the Super Show series returned in 2017 in time for their eight studio album, Play, and though it marked the return of Siwon, Eunhyuk, and Donghae from the military, the concert tour still felt the absence of Ryeowook and Kyuhyun who were still serving their duties to their home country at the time.

However, that will change this 2019 as all members have officially completed their mandatory military service.

With the upcoming release of their ninth studio album Time Slip on October 14, the group has been leaving ELFs on the edge of their seats as they anticipate with excitement, especially following the release of the album’s lead single, “Super Clap.” As of this writing, three singles have been ore-released to ease the long wait: “Somebody New,” “The Crown,” and “I Think I.”

Most recently performing in the country during Super Show 7 in June 2018, the group now marks their fifth solo concert in the country to close out the epic year that 2019 has been for the Filipino K-Pop community. They are ready to make every Filipino ELF feel like a “shining star” once again as they bring another unforgettable night full of everlasting memories to cherish for an infinite time.

Tickets will be available through SM Tickets outlets nationwide and online (www.smtickets.com).

Seat plan and ticket prices, as well as the ticket-selling date, will be released soon. Just follow PULP Live World on Facebook, Twitter, and Instagram. You may also visit www.pulp.ph for further show details.