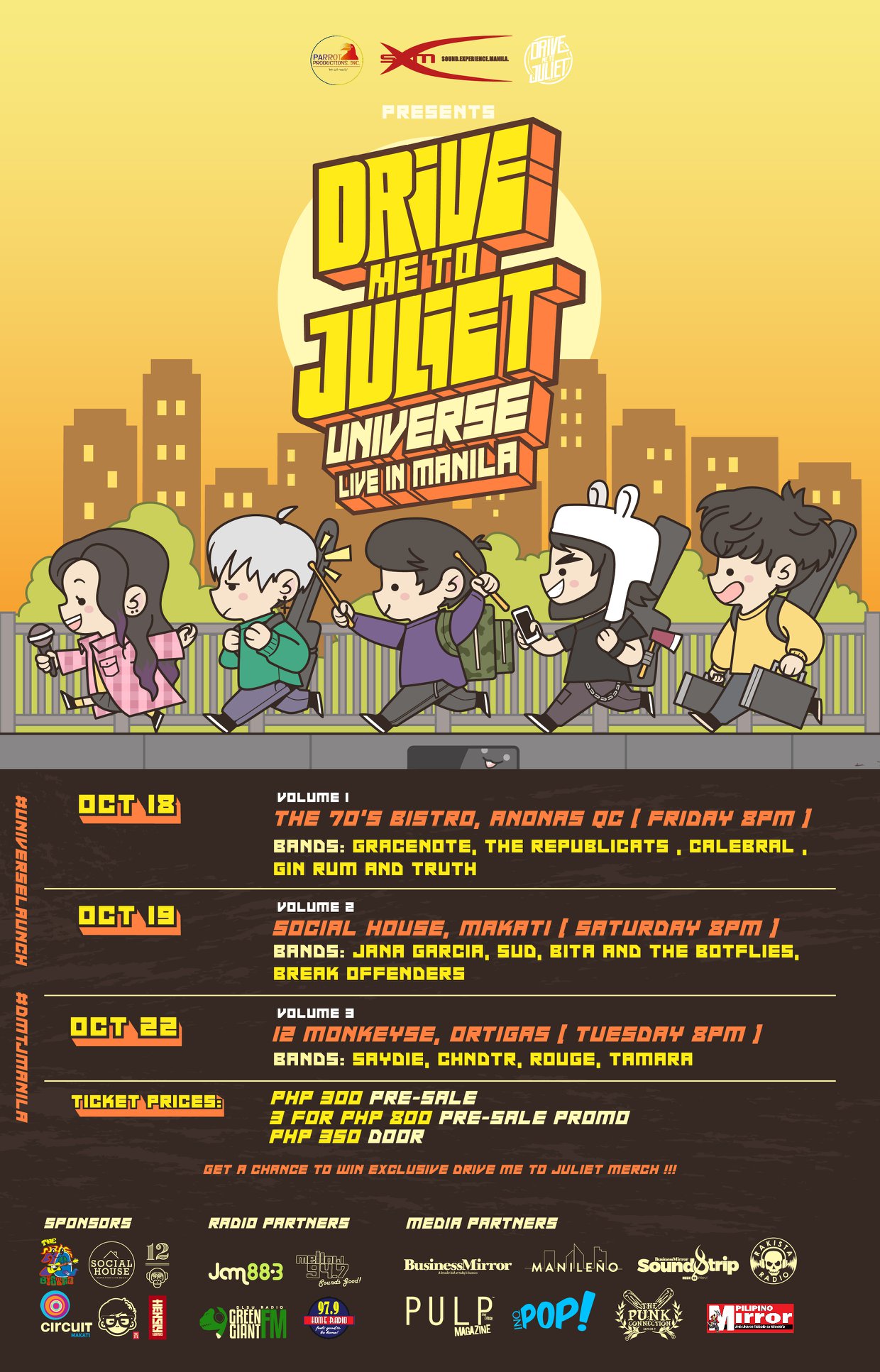 One of Cebu City’s well-loved bands, Drive Me to Juliet, are coming to Manila for their first-ever headline bar tour and music video launch in the capital since forming in 2009, aptly titled “Universe: Live in Manila”. The new music video, “Universe,” is also DMTJ’s first single off their upcoming second album due for release later this year. The music video launch tour will run across three key cities in Metro Manila, and is the band’s first production effort outside their native Cebu.

Best known for their schmaltzy songwriting about love, hope, and relationships as in “Saving Glass Heart,” juxtaposed against feel-good and laid-back pop tunes featured in “Maybe It’s Better” or alongside raw, grungy undertones like in “Absence of Understanding,” DMTJ have driven hundreds of fans all over the country with their distinctive music and relatable, down-to-earth personalities.

Composed of the Racho siblings Kaye, Randy, and Ken (mic and guitars, respectively), and joined by their childhood friends Isser (bass) and Rhan (drums), the elusive quintet’s first major gig in Manila didn’t happen until 2013; according to some members, had they not taken the risk and performed at Rakrakan Festival that year, they would have probably given up as a band.

Since then, Drive Me to Juliet have been a staple at the annual OPM gathering, gaining the opportunity to perform and share their songs to a larger audience and reconnect with their avid Tagalog listeners every year. Apart from the festival, the band has also played live in schools, with appearances at DLSU’s Green FM radio station as well as online platforms Rappler Live Jam, Inquirer POP, and Rakista Radio.

Catch “Universe: Live in Manila” at the following dates and venues:

Show starts at 8PM. Pre-sale tickets are available at P300 per head and three for P800 until October 16. For ticket reservations, send a message to SX Manila on Facebook or contact 09275629670 / 09175575945. Visit Drive Me to Juliet at www.facebook.com/drivemetojuliet for the official tour posters and more info. “Universe: Live in Manila” is presented by Drive Me to Juliet, SX Manila, and Parrot Productions.