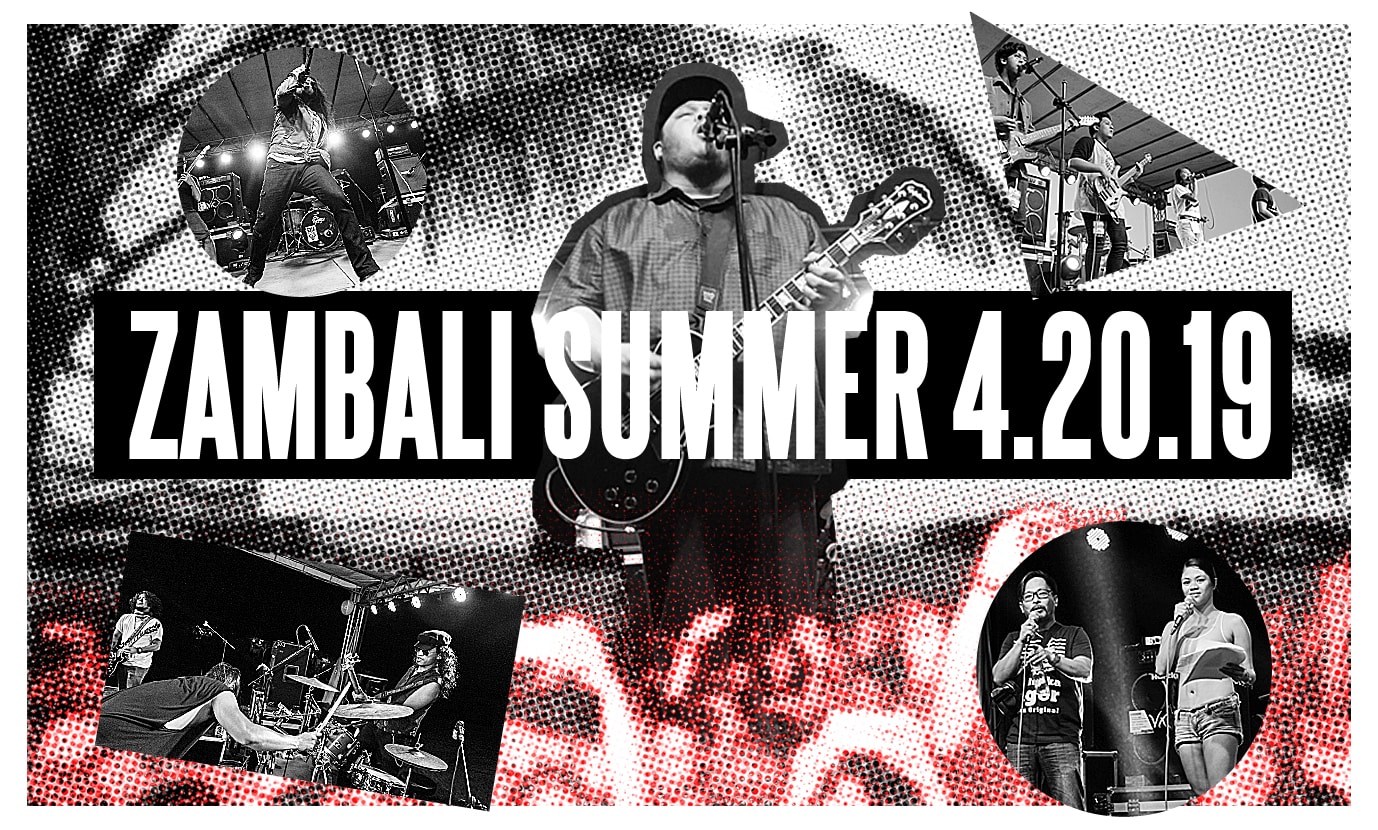 A ROADIE’S TRIP TO ZAMBALI SUMMER

Editor’s Note: The rainy season won’t stop us from bringing back memories of summer. Roadie Bryan Walter Gutierrez takes us back to the beach with tales from Rough Stuff Entertainment’s Zambali Summer.

It’s not easy being a roadie for some not-so-famous rock and roll bands.  But it has its perks.  One of this is being able to experience an awesome summer event while getting paid.

Okay.  So, I’m not just a roadie.  I’m part of Rough Stuff’s Entertainment’s PR team.  But, most of the time, I do what roadies do — lift equipment, buying coffee and the occasional massage (of course, you know I’m joking here).

Anyway, early February the internet has been swarming with talks about a beach summer event. We waited and waited.  Then, there was the call from Atty. Carlo Ybanez of Rough Stuff Entertainment and also the bassist of Hey Moonshine.  He, and a few colleagues had this newly formed group called Awesome Events and Productions.  They had an idea to organize a gig in Zambales and having more experience with this kind of things, he asked Rough Stuff Entertainment to come on board.  At that time, it was nothing grand.  Maybe something like a bar in a resort sort of thing.  As the idea progressed, fun ideas were thrown about “doing it at beach front” and “party atmosphere” and more. At this point, everything was simply a day dream.

The group of bands that call themselves “Them Bastards” were chosen to play—Gin Rum and Truth, Hey Moonshine, Black Wolf Gypsies, Whiskey Version, and SwitchBlade Manila. From a dream, the plan was becoming something real.

The team also wanted a big band that would not only appeal to the masses, but also balance the idea of a “Rock” oriented concert.  Who else could pull this off other than Mayonnaise? They’re the kind of band that could release hit after hit, and translate their music exceptionally well in front of a live audience, be it in a cramped bar or on a big stage.  They were perfect for the Event.  This is where SX Manila came in. They paved the way for Mayonnaise to be perform at the concert.

With the band on board, the event transformed from a simple resort gig to an enormous event.  Logistics then seemed to have become a nightmare given the distance.  However, the amazing people of Zambales made this event possible. We discovered an organization called Kadua Rocker’s Society who gave us contacts of local suppliers and introduced us to key people, and even other local bands.

Zambali Summer happened on April 20. At about 7:00AM, I arrived at the quaint little town of San Narciso, Zambales.  The beach strip of La Paz was already buzzing with activity early that morning.  My car started wiggling its way to La Nhoy Beach Resort where all the bands were billeted. The roads were rough and thin but manageable.

My room was on the second floor with a balcony overlooking the beach. As I went out, I heard people saying the words “Zambali Summer,” “concert,” and most especially, “Mayonnaise.”  It seemed that the event had been the talk of the town. 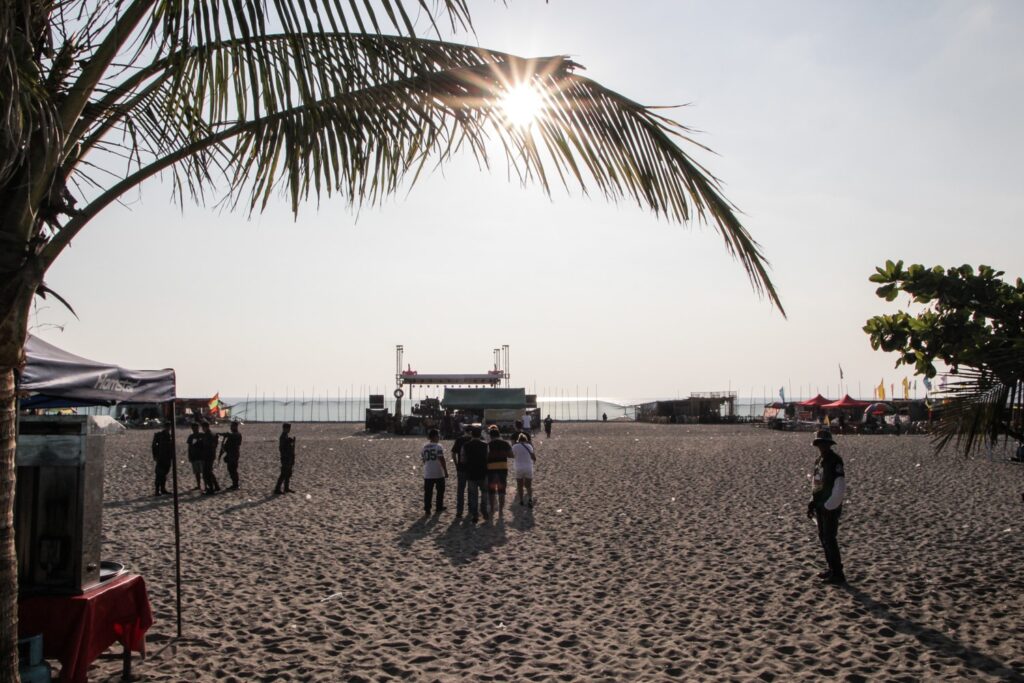 Zambali Summer happened at a huge, open beach front just in front of the Barangay Hall of San Narciso Zambales.  The venue was huge and I was told that its capacity was over three thousand people.  The stage was just a foot from where the water met the sand.  There were restaurants inside the area where people can sit down and have drinks while enjoying the concert. 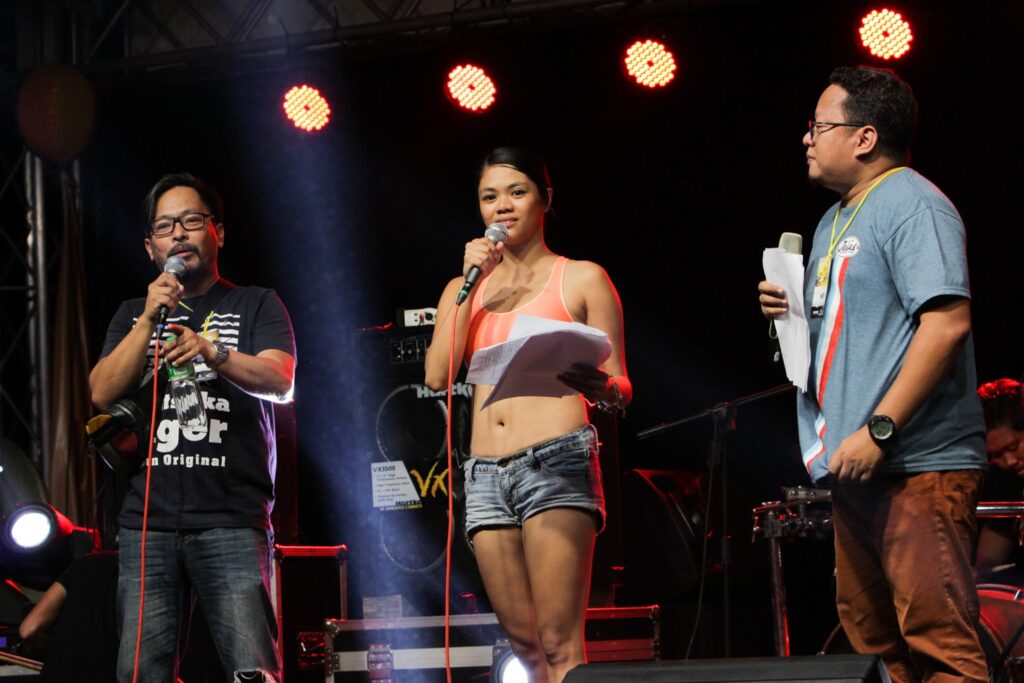 The event was hosted by standup comedians Atty. Eduard Chico and Pastor Ruther Urquia of Insanithink.  They were joined by the head of Project 4 Production’s, the lovely Kimi Buendia.

Since I was in and out of the venue, I wasn’t able to give my whole attention to the stage until the Zambales-based band Aw’te Amakeh took the stage.  This was a band of indigenous people (Aeta) who played alternative rock.  They were simply amazing.  Another Zambales-based band that caught my attention was Feed the Wolves. Their music reminded me of Wolfgang.  Come to think of it, having Wolf in their band name, they must have been clearly influenced by Basti and his crew.

I finished both sets and had a great time. As I went back to the stage area, SwitchBlade Manila had already been performing their second song.  By this time, the crowd was already on their feet.  Establishing a power house of guitar blending and headbanging, they delivered a solid hard rock/glam set. 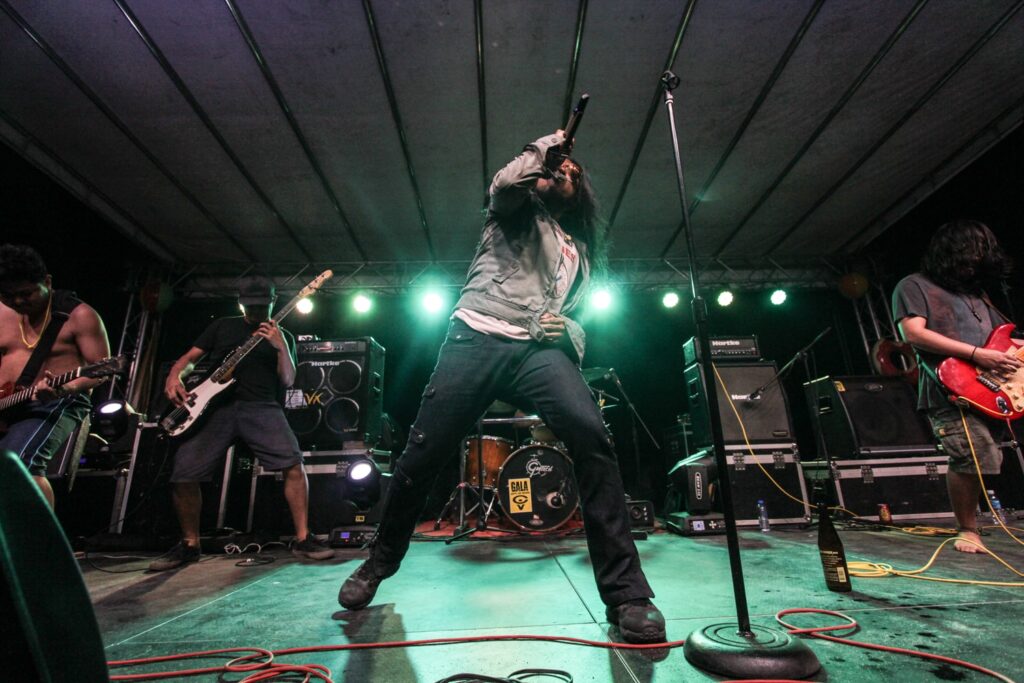 The whole ambience was perfect for a bottle of beer.  Gin Rum N’ Truth has taken the stage, going in strong with their Hit Single “Goddamn Man”.  Engaging the audience through spiels and a set that combined originals and cover songs, the band surprisingly finished with a very unorthodox yet refreshing cover of Lionel Richie’s “Hello”, GRT Style. 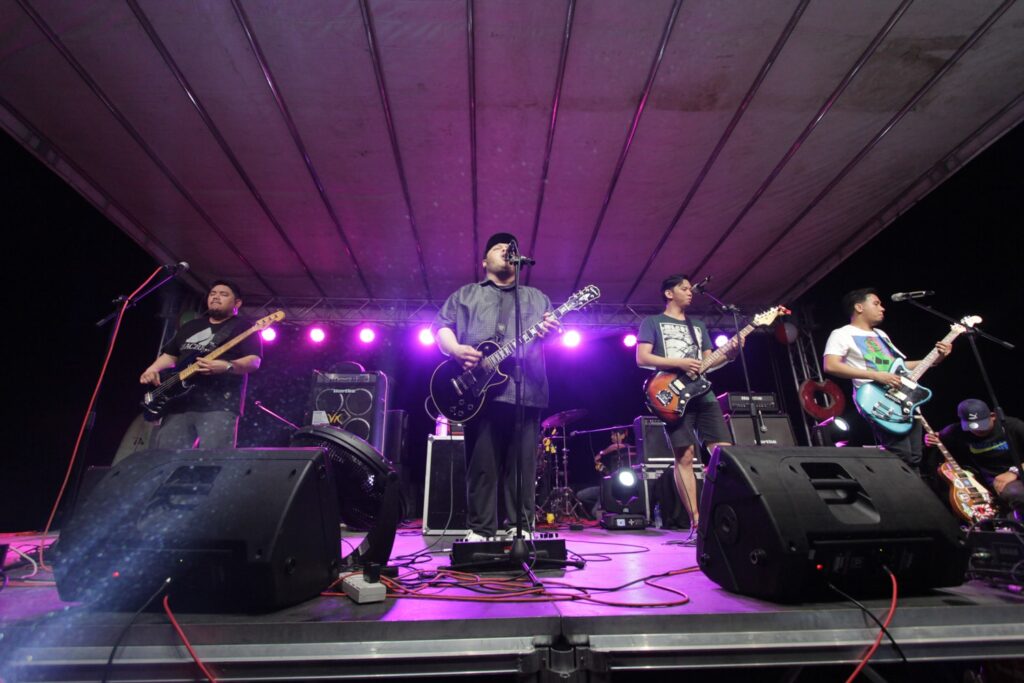 I recognized some of Mayonnaise’s crew walking in from the back of the stage.  Eventually, Monty emerged from the back opening of the concert ground perimeter. Fans—lots of them—started gathering around to take pictures with him. His crew, on the other hand, were crazy busy adjusting their equipment, checking all microphones, and coordinating with the lights and sound guys. As soon as Monty stepped on the stage, the crowd went wild! Monty engaged the crowd, doing a bit of storytelling and “improvisations” that moved the audience to sing with him.  Switching from covers to originals, Mayonnaise pulled of a solid set. For their last song, the band proceeded to play Pinoy rock classic “Laklak” (Teeth), which the crowd definitely enjoyed. 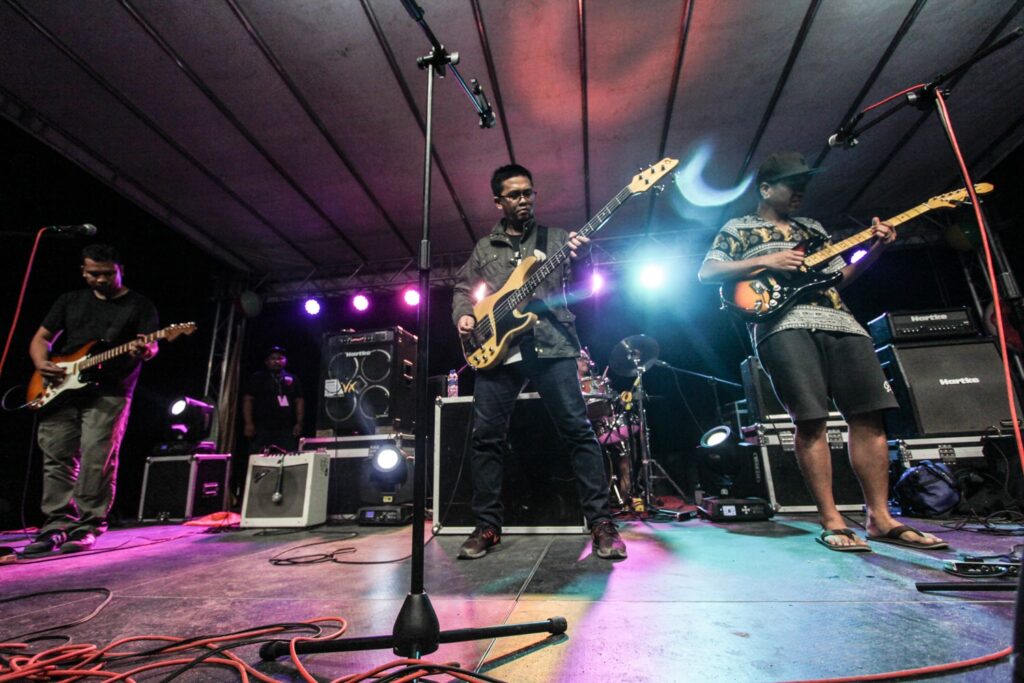 But even after Mayonnaise’s set ended, the show went on. Whiskey Version continued after them.  They shifted from 60’s and 70’s classics to originals.  All throughout their performance, they had people dancing. For some reason, the songs, as well as the mood, were so appropriate for that moment. 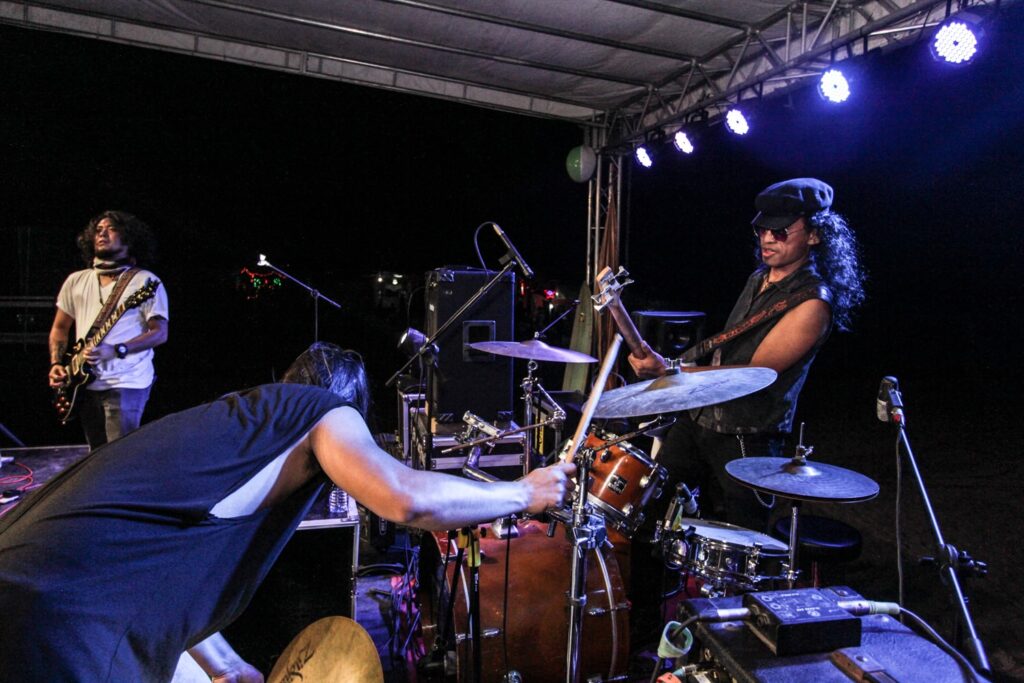 The next band was Black Wolf Gypsies. The host emphasized the band’s three-piece format. The band started to rev up, giving a heavier energy back to the crowd by playing an all-originals set filled with hard rock/rock and roll. The audience was so into it that people went up the stage as the band delivered a grand finish. 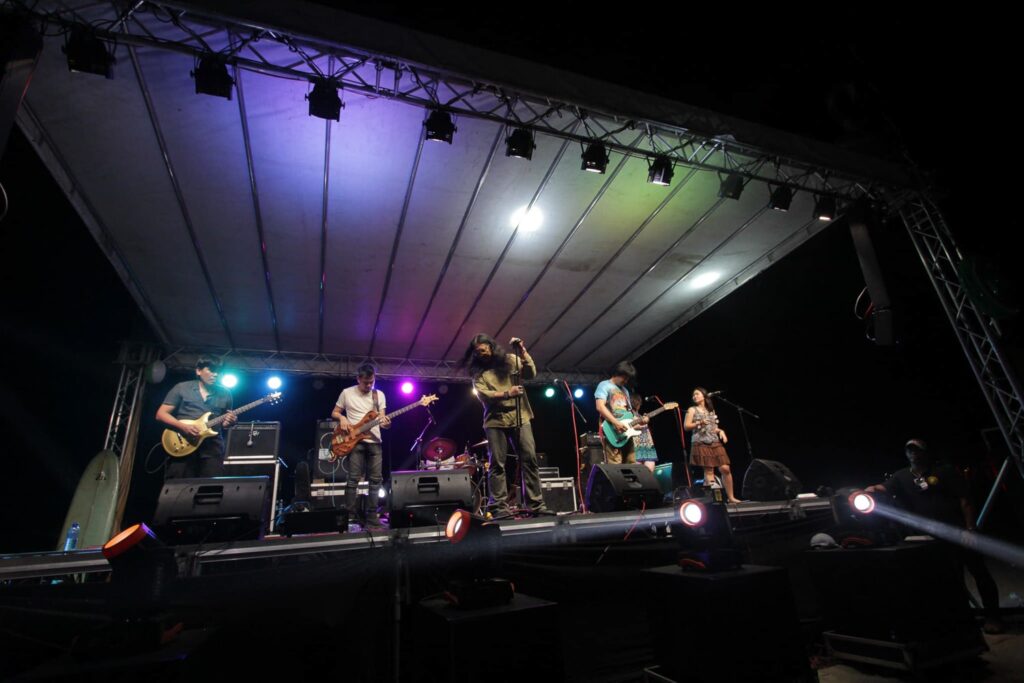 For the finale, blues rock band Hey Moonshine took the spotlight.  At this point, the crowd was hyped up as ever, happy and ready for a final rock out.  Hey Moonshine started out with a suave intro for a sound check, and then directly moving into an all-original peace-themed set.  Their music was so apt for the beach, having this hippie, southern rock feel.  By the time they played their last song “Love, Peace, Justice and Life,” the crowd was swaying and singing with the lyrics, shouting “Give love to the world and sing Halleluiah.”

It was a perfect way to cap off the night, leaving people wanting more.