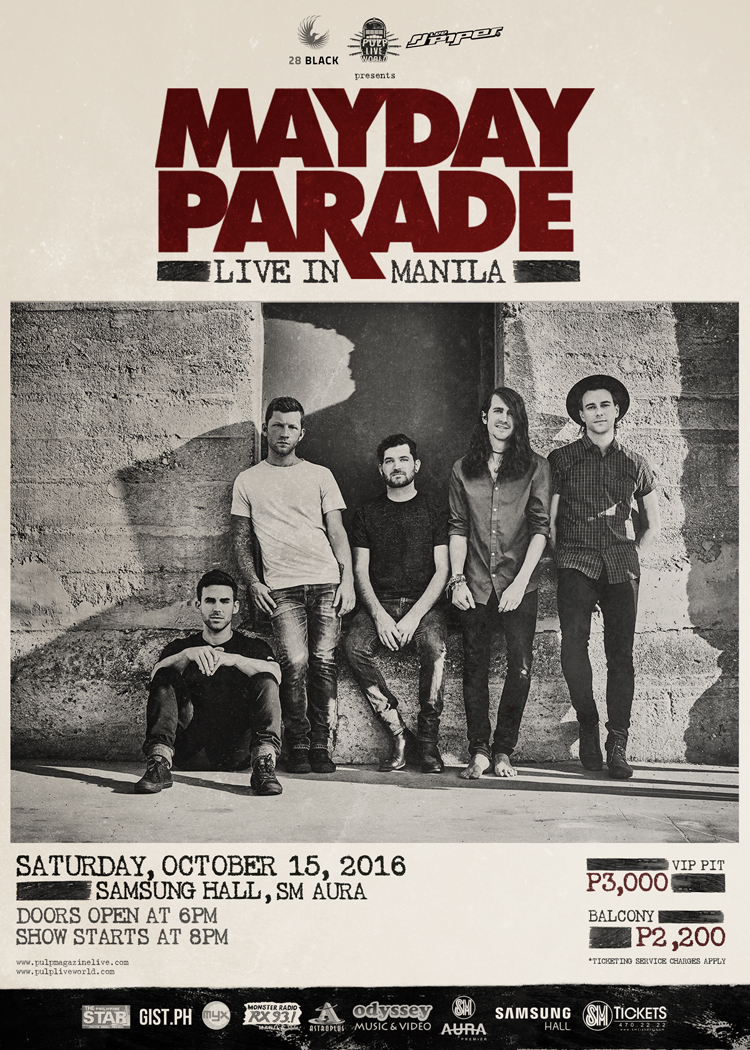 Filipino rock fans, get ready to defend pop-punk again as 28 Black, Lee Pipes and PULP Live World forge a formidable union to stage MAYDAY PARADE Live in Manila this October 15, 2016 at Samsung Hall, SM Aura, BGC, Taguig City. The American worldwide pop-punk sensation from Tallahassee, Florida is set to return to one of their most favorite countries in support of their fifth critically-acclaimed full-length album Black Lines. The band will be performing songs from their latest release such as “Letting Go,” “One of Them Will Destroy the Other” and “Keep in Mind, Transmogrification Is a New Technology” alongside fan favorites such as “Stay,” “Oh Well Oh Well,” “Miserable at Best” and “Jamie All Over,” among many others.

In a past interview with PULP Magazine, Mayday Parade lead vocalist Derek Sanders professed his love for their Filipino fans. “I’m really not sure (I can accurately put it into words), but we are truly thankful for it,” says Derek. “Each time we’ve come over it’s been even better than the time before. Whatever the connection is, (I feel that) it is genuine and I hope we keep coming back for years and years to come.”

MAYDAY PARADE Live in Manila is co-presented by 28 Black, Lee Pipes and PULP Live World. It will be held this October 15, 2016(Saturday) at Samsung Hall, SM Aura, BGC, Taguig City. Doors will open at 6PM while the party starts at 8PM. Tickets will be on sale this June 1, 2016 and are priced at ₱3,000 (VIP Pit) and ₱2,200(Balcony) subject to ticketing service charges available exclusively at www.smtickets.com and all SM Tickets outlets nationwide. You can e-mail royalty@pulpliveworld.com for PULP Royalty privileges that will include a VIP ticket, an invitation to the After party Mini-Buffet courtesy of Seoul Train, complimentary 28 Black and a meet-&-greet hang-out session with Mayday Parade. Please call the PULP Live World HQ at 727-4957 for more details. This show is also made possible by The Philippine Star, Gist.ph, Myx, Monster Radio RX 93.1, Astroplus, Odyssey Music & Video and PULP Magazine.