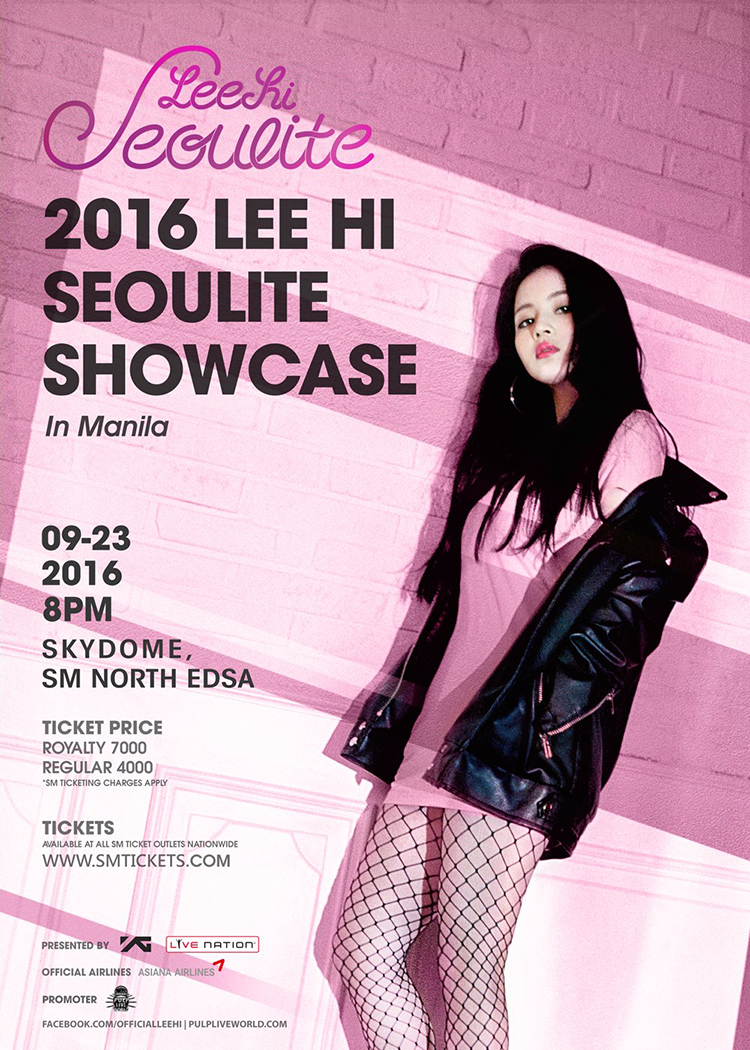 South Korean singer LEE HI will make her debut on our shores this September 23, 2016 at SM Skydome, SM North EDSA, Quezon Cityin what promises to be a spectacular show in an intimate setting. The KPOP sensation who first made waves as the runner-up to Park Ji-min (of 15+ fame) on the first season of K-pop Star at the tender age of 16 will be touring in support of her sophomore album Seoulite, her first release after a three-year hiatus as a solo artist that debuted at No. 3 on the Billboard World Album chart. She will bring her sultry brand of KPOP music heavily flavored with a retro Western pop twist (read: Amy Winehouse, Adele, Meghan Trainor) to her Filipino fans via certified worldwide hits such as “1, 2, 3, 4,” “Rose,” “Hold My Hand,” “My Star” and “Breathe,” among many others.

After her K-pop Star Season One stint, Lee Ha-yi was originally assigned by premiere KPOP management group YG Entertainment to a girl group, but her success as a solo singer prompted them to let her continue as such. Her debut single “1, 2, 3, 4” was released in 2012 and reached No. 1 with first week sales of 667,549 downloads. The aforementioned song earned “World’s Best Song” and “World’s Best Video” nominations at the 2012 World Music Awards and “Best Rookie” wins at both the 2013 editions of the Golden Disk and Seoul Music Awards. Her first album First Love was released in 2013 and surprised the KPOP world with her curious take on jazz and R & B influences that’s rarely heard from her contemporaries. The single “Rose” topped both Billboard Korea and Korea’s own Gaon charts. She decided to go on an unofficial hiatus shortly after that (but not without resurfacing on sub-units such as B&H with 2NE1’s Bom and Hi Suhyun).

Billboard World Chart and No. 16 on the Billboard Heatseekers Chart. The debut single off the album “Breathe” ranked first on every major Korean chart. The album was released in two parts marked by two hit singles – “Breathe” (half-album) and “My Star” (full album). To explain the logic behind the two releases, Lee Hi told Billboard Korea that “‘Breathe’ and ‘My Star’ have a different sound and vibe. While ‘Breathe’ is a ballad, ‘My Star’ is a song that best represents who I am, or what people think of me. Regarding my half and full album, you can see the difference displayed even in the artwork. The sun is up high in Seoulite’s half album but in the full album, you see the sun set. The true meaning of my album lies in this imagery. It’s only complete when we combine the ‘half’ and ‘full’ album, but we must not forget that there is a significant difference between the two pieces.”

LEE HI’s SEOULITE TOUR 2016 LIVE AT SKYDOME is presented by PULP Live World and will be held this September 23, 2016 at SKYDOME , SM North EDSA, Quezon City. Show starts at 8PM.Ticketing starts on August 27, 2016, 10AM at all SM Tickets Outlets Nationwide or online at www.smtickets.com. For inquiries, you may email us at royalty@pulpliveworld.com or contact our PULP hotline at 727-4957.